Strath Creek Falls (I’ve also seen it referred to as Murchison Falls; not to be confused with the one in Uganda) was barely hanging on to its last flows when we made a second visit here in November 2017.

On our first visit, the 50m falls was practically invisible due to the Great Australian Drought that affected our November 2006 trip.

It was a drought that had persisted for the better part of that decade!

For some strange reason, it seemed fitting that the falls resided in the Mt Disappointment State Forest for either of our visits here could certainly be characterized as such.

The Mt Disappointment State Forest sat in a fairly remote and rugged part of the Murrindindi Shire north of Melbourne.

For one reason or another, this region didn’t seem to get the benefit of much rain in either of our visits to the country in November 2006 and November 2017.

Like with many waterfalls in the fickle hinterlands of Central Victoria, seeing this falls flow would require a good deal of timing (i.e. not waiting for long after the last significant rain storm).

Once we reached the signed trailhead off Falls Road (see directions below), it was a mere 70m to descend to the Strath Creek Falls lookout, which was where the photo you see at the top of this page was taken from.

That photo was taken in the late afternoon so the shadows were long on this north-facing waterfall.

In order to avoid shadows, I’d imagine that the height of the morning or midday would be best since the sun was be directly above us.

In any case, the track continued to descent for the next 430m eventually reaching Strath Creek just above the top of the falls.

Aside from semi-obstructed views downstream, there really wasn’t much reason to go this far past the lookout.

And from seeing some of the shrines set up here to remember those who happened to lose their lives here, I’d imagine it wouldn’t be worth exploring beyond the sanctioned track either.

Given our disappointing experiences at Strath Creek Falls, it was hard to believe that this was the inspiration and subject of some historical art masterpieces by Eugene von Guerard in 1862 and William Delafield Cook in 1979.

According to a sign here, both their works could be found in the Art Gallery of New South Wales.

Such influential works could very well have established the Goulburn Valley as important places for agriculture, occupation, and tourism during the days of European settlement.

Strath Creek Falls resides in Murrindindi Shire. It is administered by the Murrindindi Shire Council. For information or inquiries about the area as well as current conditions, visit their website.

We’ll describe the most straightforward route from the Melbourne CBD since I’d imagine this would be the most common approach. While there are other rural approaches from the west, north, and east, this section could be very verbose if we addressed all those possibilities. The key is to get to the town of Broadford, which is right off the M31.

From Melbourne, we had to find our way out of the city and onto the Hume Highway, which eventually accessed the Hume Freeway (M31) from the M80 (Metropolitan Ring Road). At about 60km from the start of the M31 freeway, we took the Broadford Flowerdale exit (C382) then turned right to go east on the Strath Creek Road (C382).

We then turned left onto the unsealed spur road and after 300m, we kept right at the fork to go anticlockwise on the one-way loop road. After another 350m of driving, the road then steeply descended the remaining 200m to the trailhead for Strath Creek Falls. I recalled the first time we were here in November 2006 that this steep section made me uncomfortable enough to turn back the wrong way and walk all the way down. However, on our most recent visit in November 2017, this steep section of road wasn’t so bad, and I managed to make it down to the trailhead without any issue with the 2wd rental car.

To get out of here, we just followed the rest of the anticlockwise loop to return to the fork that started the one-way driving, and then return to the Murchison Road and return back the way we came.

Overall, it took us just under 2 hours to make this drive from the city to the falls. However, at least 30-45 minutes of this drive was consumed in snarling traffic and numerous long traffic lights in Melbourne. 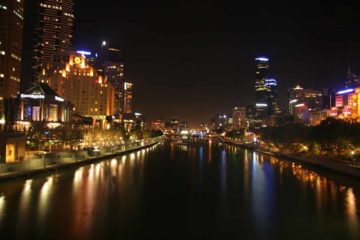 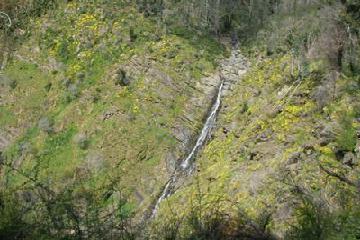 Strath Falls recovery following 2009 fires November 29, 2010 5:41 am by Lucas Russell - Strath Falls was severely burnt during the 2009 fires in Victoria. Almost 2 years on, and after a year of almost record rain, the falls are recovering well. ...Read More