Tia Falls (pronounced “TYE-uh” and not “TEE-uh” like Spanish for auntie) was one of several impressive waterfalls in the Oxley Wild Rivers Gorge system.

I couldn’t find any information on its height, but I’d imagine it’s somewhere around 100m or more as it cascaded steeply into the gorge and rainforest below.

We thought the best viewpoint of the falls was from right across the gorge.

However, this look-but-don’t-touch vantage point was a bit distant for my liking.

So aside from taking photos and gawking at the waterfall from somewhat far away, there didn’t seem to be many other options available to us to experience the falls in other ways.

Julie and I reached the viewpoint (that yielded the photo above) by following a walk that left the car park (see directions) and followed a flat track to our right that skirted the gorge.

Throughout this walk, we were able to see parts of the falls from different angles.

However, we never really got to experience very satisfying views of the falls until we reached the overlook itself.

Distance-wise, it was a 1.5km return walk between the car park and overlook.

A little further along the track past the waterfall lookout platform, we then reached a different lookout revealing the Tia Gorge further downstream from Tia Falls.

Since we arrived in the morning, we looked against the sun from that lookout so we might have better appreciated this view in the afternoon.

Overall, Julie and I spent about 50 minutes doing this excursion, which encompassed the waterfall sighting as well as the continuation of the track to the Tia Gorge Lookout.

Signs here indicated that there was also a longer 5km walk around the other side of the gorge past the top of the falls then out to the Tiara Lookout.

The Tiara Lookout was said to have a more dramatic panorama of the high plateau scenery, but we didn’t do it so we can’t comment more on it.

Finally, the interpretive signs here also said that the Tia River was one of the most reliable water sources within Oxley Wild Rivers National Park.

That would explain the thunderous healthy flow that we witnessed, which produced the satisfying photos on this page.

Such a healthy drainage could be attributed to a combination of the high rainfall of the headwaters of the Tia River further south at Mummel Gulf National Park and Riamukka State Forest.

Therefore, we could also say that Tia Falls would tend to have a year-round flow.

Tia Falls resides in the Oxley Wild Rivers National Park near Armidale in New South Wales. It is administered by the NSW National Parks and Wildlife Service. For information or inquiries about the area as well as current conditions, visit their website.

Access to the car park is via a 7km unsealed spur road off the Oxley Highway (Hwy 34) some 37km southeast of Walcha.

From Port Macquarie, it’s about a 2-hour drive (150km) to the unsealed spur turnoff for Tia Falls.

For further context, Port Macquarie was 391km (over 4 hours drive) north of Sydney and 548km (6.5 hours drive) south of Brisbane.

Fixated on the falls from across the Tia Gorge 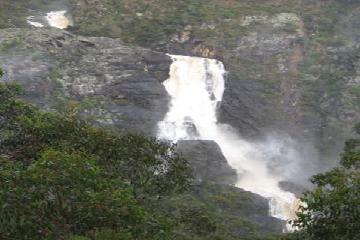 Thundering Tia Falls May 30, 2009 1:57 pm by Ian Dutton - I was here recently after heavy rain and the falls were thundering. ...Read More 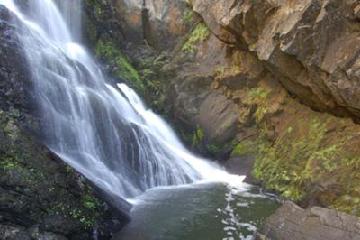 Tia Falls September 9, 2008 12:56 pm by Ian Smith - Pronounced "tyre" these falls are but one of a multitude that dispense their waters into the Oxley Wild Rivers National Park and ultimately into the Macleay River that runs through Kempsey. These falls are not anywhere near as popular as the nearby Apsley, nor are they as dramatic. No, these suit the keen bushwalker who… ...Read More