Tuross Falls surprised Julie and I with its resiliency considering that almost everything about our Southeastern Australia trip in November 2006 suggested that the falls should have succumbed to the big drought.

The reason why we were so pessimistic about the state of the falls was that the Snowy Mountains and its surroundings were so hard hit by the drought that all the foothills were totally brown with seemingly lots of fuel for bushfires.

Even though we were technically still in Spring, it was a very discouraging sign.

On top of that, we weren’t even sure that the trailhead was accessible by our low clearance 2wd rental car (see directions below for more details).

Indeed, we took a gamble with our time and money by persisting with our visit to this waterfall.

And as you can see in the photo above, I’d say that our gamble paid off.

A Stroke of Luck?

Part of the reason why we might have been so fortunate to see the falls despite the dry conditions was that we had experienced a few consecutive days of rain when we were passing through the Illawarra Region and Southern Highlands prior to our visit to the falls.

We learned from the friendly folks at the visitor center in the nearby town of Cooma that the same rain storm that affected our visit had also revived some of the drainages in Wadbilliga National Park (where Tuross Falls was located).

They did express concern that the access road to get to the falls might be a little muddy from those rains, but at the same time, one of the employees said she would go there all the time and never needed a high clearance vehicle.

So all that information gave me the confidence that it was at least worth a try to seek out the Tuross Falls.

Once Julie and I finally arrived at the trailhead, we obeyed the sign there and took the track leading us in the direction of the falls, which was said to be 2 hours return.

The sign also indicated that there were other cascades about 30 minutes return going in the other direction, but we didn’t go to that one.

In any case, after going over and besides some dry streambeds early on in the hike (not en encouraging sign), the trail was fairly straightforward to follow.

We generally went gently uphill in stretches flanked by lots of shrubs and mostly prickly trees (as if they were literally tinder bundles).

After nearly an hour of hiking, we then reached a short set of steps leading down to a lookout platform with a distant view of Tuross Falls (as you see pictured at the top of this page).

It turned out that the dry streambeds we had seen early on in the hike were not on the same stream as the waterfall.

So this lookout platform was our turnaround point as we were pretty much relegated to just viewing the falls.

We weren’t able to experience more of the falls (i.e. getting closer to it) from what we could tell.

When we returned to the car park, it turned out that the signs were almost spot on as we took just under 2 hours on this hike.

Tuross Falls resides in the Wadbilliga National Park near Cooma in New South Wales. It is administered by the NSW National Parks and Wildlife Service. For information or inquiries about the area as well as current conditions, visit their website.

Tuross Falls is nestled in the remote Wadbilliga National Park roughly about an hour’s drive (43km) from Cooma. Getting to this waterfall required a little bit of work, but we were able to do it as a half-day trip starting from Canberra then going to the town of Cooma (about 94km or 116km south of Canberra on the Monaro Hwy [Hwy 23]), before making it to the falls. So we’ll describe the route from Cooma since it was the closest town of note.

From the Cooma Town Centre (where Monaro Hwy becomes Sharp St), we headed east onto the Monaro Hwy, then we remained on the highway until we turned right onto Yareen Rd. We then followed Yareen Rd, which eventually became Cooma Numeralla Rd. The road then became Numeralla Countegany Rd after the town of Numeralla (after about 20km from Monaro Hwy). Once we got into the town of Countegany (about 11.5km from Numeralla), we turned left onto Snowball Rd. After 1km on Snowball Rd, we turned right onto an unpaved forest road (I believe there were signs for Wadbilliga National Park and Tuross Falls at the turnoff).

We then followed the unpaved road (which was not as bad as we had anticipated) and kept right at the junctions with Badja Forest Rd, Peters Rd, and Boorong Road so we would remain on what would become Tuross River Rd. At about 12.4km from Snowball Rd, we arrived at the unsealed car park for Tuross Falls (I recalled there were obvious signposts indicating we were in the right place).

Finally, even though we’ve documented our experiences, it doesn’t guarantee that you’ll experience the same conditions. Therefore, I think it would be wise to inquire at the Cooma Visitor Centre if you do intend to visit Tuross Falls. That would at least minimize the likelihood of any unpleasant surprises (like road and trail closures or getting stuck). 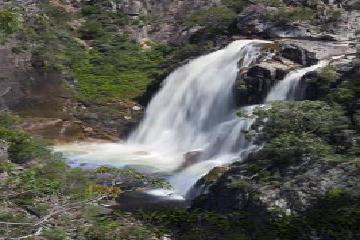