Twin Falls is one of many waterfalls on Springbrook Mountain where you have to hike down beneath the cliff tops to truly experience its hidden surprises.

In this instance, I went on the shortest hike that I could find to experience it given that I had time constraints when I visited it in July 2022.

As you can see in the photo above, it was well worth singling out this waterfall excursion (out of the many to choose from) in the Gold Coast Hinterland.

After all, the waterfall is true to its name as it featured a side-by-side 40m plunge that actually lets you go behind it!

Furthermore, the hike that I ended up doing packed quite a punch as it also featured other hidden waterfalls as well as an intriguing rock cave.

There are also options to extend this hike to take in other waterfalls (such as the 4km Twin Falls Circuit and 14km Warrie Circuit), and I’m keen on coming back here to experience more of them.

Therefore, it probably didn’t come as a surprise that this seemed to be one of the more popular walks (actually most Springbrook hikes can be busy considering it’s only an hour drive from the Gold Coast).

And so getting an early start or avoiding the weekends would be a good idea, especially since parking is quite limited.

Anyways, I’ll run through a trailside description of how I experienced Twin Falls that only does the bare minimum necessary to get the most of a visit in a short amount of time.

Putting some numbers behind how I did the “Twin Falls Short Circuit”, my GPS logs suggested that I had hiked about 2.6km, which can take anywhere between 60-90 minutes.

I managed to do this short hike by starting from the Tallanbana Picnic Area (see directions below), where there were limited parking spaces.

From there, I descended through the picnic area and onto a descending and well-marked track through a familiar lush rainforest that benefits from the high rainfall that Springbrook Mountain tends to draw.

After around 400m, I reached a bridge crossing over Boy-Ull Creek, which happened to be just upstream from Twin Falls so it couldn’t be seen.

So continuing on with the trail, it hugged ledges while providing glimpses of another waterfall, which I believe fell on Rush Creek.

After about 800m from the Tallanbana Picnic Area (or about 400m past the bridge over Boy-Ull Creek), I reached a trail junction.

At this point, I descended to the left to continue towards Twin Falls whereas the other path continued on the much longer Warrie Circuit.

The path went down a pair of very narrow concrete switchbacks with railings to hold onto if the path gets wet and slippery.

At the bottom of these switchbacks, there was a surprise waterfall that actually spilled next to the trail as well as another cascading waterfall (both of these falls almost made me mistaken them for Twin Falls).

Going past the falls that was adjacent to the trail, the path then went beneath a jumble of wedged boulders making it almost seem like I was passing through tunnels and narrows.

After this boulder jumble section, the track then went to another signed fork, where both paths went to the Twin Falls though the upper path went through a rock cave.

Taking the path on the left, it briefly climbed before entering a very tall and elongated cave (which was really more like a large rock leaning against a cliff).

Beyond the cave, the path then followed a ledge that went behind the Twin Falls as it eventually curled to a bridge at the mouth of its plunge pool.

Along the way, I also noticed another surprise waterfall that appeared to be on a temporary creek so perhaps it just benefitted from the La Nina rains during my visit.

At this point, I had the option to continue the Twin Falls Circuit, but because I was short on time, I opted to go back via the other short loop (the one that avoided the rock cave).

Then, I went back the way I came, where I ultimately got back to the car park after about 70 minutes away from the car (though I was a bit hasty because we had a tour to catch that day).

I’m sure given an opportunity to come back here, I’ll be keen on finishing the entire Twin Falls Circuit.

Heck, I might even try the Warrie Circuit to see what the bottom of Goomoolahra Falls is like.

Twin Falls resides in the Springbrook National Park near the Gold Coast, Queensland. It is administered by the State of Queensland Department of Environment and Science. For information or inquiries about the area as well as current conditions, visit their website.

Since we tend to do our Gold Coast Hinterland excursions while basing ourselves in Surfers Paradise, I’ll just describe the route from there.

Now there are actually many ways you can go to get to this waterfall from the general Gold Coast area, but I’m going to describe the way we tend to do it since the other ones may be closed (as it was when I did my visit in July 2022).

Starting from the Esplanade in Surfer’s Paradise, we’d drive north 750m on the Esplanade before turning left onto Ocean Ave then making a right turn onto Gold Coast Hwy (State Route 2) 220m later.

Next, we’d follow the Gold Coast Hwy for about 2.5km before turning left onto Queen Street (State Route 20).

From there, we’d drive on State Route 20 for about 13.4km going through the suburb of Nerang, where the route will eventually become the State Route 90 before splitting off with State Route 97.

After another 7km on Pine Creek Road, it will reach a three-way junction where we’d then turn right onto Springbrook Road (State Route 99).

Then, we’d drive about 9km towards the signed Tallanbana Picnic Area on the left (note there is limited parking here).

Overall, this drive would take around an hour (possibly more depending on traffic and the traffic lights).

Something worth reiterating is that given how much real estate the Gold Coast covers, perhaps the best accommodations for tourists would be at Surfers Paradise, which is a touristy area by the beach. 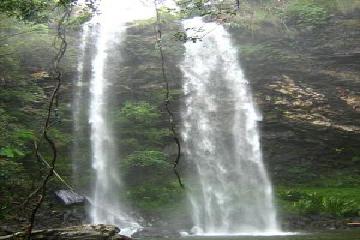 Twin Falls April 7, 2009 11:04 am by Chris L - There are many waterfalls at Springbrook National Park in Southern Queensland, but if I had to pick a favourite it would have to be Twin Falls, a 40 metre drop on the Eastern side of the escarpment. The two waterfalls then cascade further down the mountain, as can be seen to good effect from Canyon… ...Read More