Wannon Falls had that classic rectangular plunge that really pleased Julie since this was the type of waterfall she tended to like more than the others.

As you can see from the photo below, the Wannon River was flowing fairly well before making its 30m drop during our most recent visit to the area in November 2017.

This was not the case when we first showed up in November 2006.

That was when the falls was merely trickling as it was adversely affected by the drought that hammered the southeast of the country (especially Western Victoria) for the better part of the decade.

The wide alcove beneath the overhanging lip of the cliffs supporting the waterfall demonstrated that the falls had probably been around for a long time given its advanced stage of the underlying erosion.

Like with the neighboring Nigretta Falls, this was practically a mandatory stop along the Glenelg Highway, especially if you happened to be in the Hamilton vicinity.

It was very easy to experience from the picnic area though it didn’t appear trivial to get a different experience by getting to the bottom of (and possibly behind) the waterfall.

Neither were we able to experience it from the other side of the gorge without seriously extending the excursion (something we didn’t want to do given the incoming rain storm).

However, we did experience Wannon Falls from a couple of locations.

The Viewpoints for Wannon Falls

The first one was from a distant viewpoint (see directions below) at the Thomas Clark Viewpoint.

From this vantage point, we could see the full context of the falls and the curved amphitheater it resided in.

The other viewpoint was close to the picnic area, which was reached from a different access road and car park.

A very short walk from the car park led us to a viewing area where we got the closer and expansive view you see pictured at the top of this page.

There were other tracks leaving from the picnic area that went further upstream, but we didn’t get to explore them so we can’t comment further on where they went.

Finally, there’s a couple of observations worth mentioning.

On that first visit to the falls back in November 2006, Julie and I saw water in the Wannon River further upstream as we were driving towards Hamilton from the Grampians National Park.

However, by the time it got to this falls, most of the waterflow was gone.

We suspect that the remainder of the flow of the river was diverted for agricultural purposes since the Southern Grampians Shire appeared to be a major agricultural region.

Another observation was the presence of tough volcanic rocks, including basalt remnants near the lip of the falls.

This made sense since the general area west of Hamilton was also known as Volcano Country.

And such volcanic rocks are typical of the geology necessary to give rise to waterfalls.

We were able to reach Wannon Falls from Hamilton by driving west on the Glenelg Highway (B160) for a little over 17km.

At this point, we had an option of driving to a distant viewpoint of the falls or continuing along the highway before turning off for the main picnic and viewing area.

Driving from Hamilton to both viewpoints

For the distant view from the Thomas Clark Viewpoint, we would turn left onto Morgiana Road (which itself was opposite the Wannon-Nigretta Fall Road).

Then, we’d follow this rural road for another 700m before turning right at the signpost for the Thomas Clark Viewing Area.

For the main car park and picnic area, we’d continue on the Glenelg Highway (B160) shortly past the Morgiana Road turnoff.

The next turnoff was signed and that slowly led us 1km to the round car park nearest to the falls.

Overall, the drive from Hamilton to this car park would take about 25 minutes.

Driving from Nigretta Falls to both Wannon Falls viewpoints

Alternately, we could also drive from the Nigretta Falls to the Wannon Falls picnic area (assuming we were visiting Wannon Falls last instead of first).

From the Nigretta Falls viewpoint and car park, we turned right onto Wannon-Nigretta Falls Rd for about 7.5km before rejoining the Glenelg Highway opposite Morgiana Rd.

From this intersection, we had a choice of continuing straight onto Morgiana Rd for the Thomas Clark Viewing Area or turning right then a quick left to go onto the Wannon Falls Road to the picnic ground.

Finally, we could turn right onto Glenelg Highway and drive about 700m before turning left onto Camerons Rd.

This route would eventually lead roughly 350m to the car park and picnic ground.

The drive between the two waterfalls took us on the order of about 15 minutes. 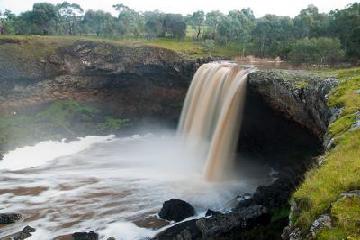