Waterfall Bay typically referred to a body of water off the east coast of Tasmania on the rugged Tasman Peninsula.

For the purposes of this page, I’m also using that term to refer to the 100m waterfall that would typically drop right into the Tasman Sea beneath Clemes Peak.

However, as you can see from the photo above, that waterfall only left a dark stain on the sandstone cliff as it was trickling.

This was despite a couple of days of fairly heavy rains prior to our visit in late November 2017.

That observation led me to believe that you’d have to come here after several episodes of heavy rains to at least let the seasonal creek saturate and support the waterfall and a possible companion to its right.

The rains that preceded our visit merely broke a fairly long 1-2 month stretch of unusually dry and warm conditions in Eastern Tasmania.

While I’ve read that the authorities had been looking to close off the road, it was still open (albeit not well-signed) during our visit.

Had the road been closed, then we would have had to walk 3km round trip starting from the Devil’s Kitchen and Tasman Arch area.

That was along a very scenic cliff-hugging stretch that would have taken in even more sea arches and temporary waterfalls along the way.

We’re keen to do this the next time we’re fortunate to visit this part of Tassie when the waterfalls would be flowing.

In any case, this walk was said to take about an hour return.

Truthfully in hindsight, doing that track probably made the most sense because the Devil’s Kitchen, Tasman Arch, and the Blowhole were all sea cliff attractions that were worth visiting alone.

In fact, the first time we visited the Tasman Peninsula back in early December 2006, we did just that.

However, we had skipped looking for waterfalls back then as we didn’t expect to see any of them given the pre-conditioned mindset to expect drought conditions throughout that trip.

The Waterfall Bay hike would add further icing to the cake so-to-speak while also leaving behind the tour buses and auto-tourists to the more famous roadside attractions.

We just didn’t bother doing the whole hike due to time constraints after a late start to the day as well as the fact that the waterfall wasn’t flowing.

Instead, we chose to do things the lazy way and drove over to the other end of the Waterfall Bay Track to save on time as we were visiting Port Arthur after having our fill of this area.

According to the signage at the Waterfall Bay Lookout, the pounding action of the Southern Ocean gave rise to the tall sandstone sea cliffs here.

However, they had also carved out underwater caves that were said to be the most extensive cave system in all of Australia.

Such underwater caves were said to harbour a variety of marine life like seadragons, sea fans, sponges, leather jackets, and well as many colourful fish.

Indeed, it was like a scene more fitting of the Great Barrier Reef than the cool temperate waters of Waterfall Bay.

Julie and I had seen a pair of touring boats in the bay, which could very well have supported diving to take in those sights.

By the way, the same erosive action that resulted in the underwater caves were also responsible for the Tasman Peninsula’s more famous attractions.

Waterfall Bay resided in Tasman National Park near Eaglehawk Neck, Tasmania. It is administered jointly by the Tasmania Parks and Wildlife Service and the Tasmanian Aboriginal people. For information or inquiries about the area as well as current conditions, visit their website.

We drove to Waterfall Bay from Hobart so we’ll describe this driving route in this section.

From the Hobart CBD, we made our way to the one-way Macquarie St (A6), which headed east before becoming the Tasman Highway (A3) just past the Brooker Highway (Hwy 1) junction.

Then, we followed the Tasman Highway (A3) for the next 24km to the town of Sorell.

At the intersection of Gordon St and Cole St in the centre of town, we then turned right to leave the Tasman Hwy (A3) go onto the Arthur Hwy (A9).

After about 50km on the Arthur Hwy (A9), we entered the isthmus of Eaglehawk Neck, where we left the A9 for Blowhole Rd (C338).

Then, after 2km on Blowhole Rd (C338), we then turned right onto Waterfall Bay Road (there was no obvious sign indicating for us to turn this way).

We followed this mostly unsealed 4km road to its end, where we reached the car park for the lookouts of Waterfall Bay.

It took us about 75 minutes to do this drive.

To reach the Devil’s Kitchen and Tasman Arch car parks, we followed Blowhole Rd for another 1km beyond the Waterfall Bay turnoff then took the Tasman Arch Rd on the right.

After 800m, the car park for the Tasman Arch was on the left.

In another 250m on Tasman Arch Rd was the car park for the Devil’s Kitchen. 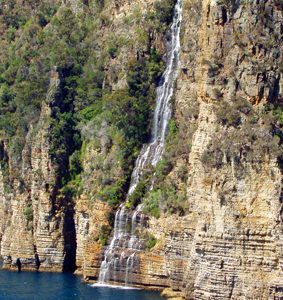 Waterfall Bay (Tasmania, Australia) September 6, 2020 4:29 pm by Jose Luis Sanchez Esteban - My mood about this waterfall has been changing from one extreme to the other. Going towards the waterfall I was excited at the idea of seeing for the first time a waterfall falling directly into the sea. But being there I became very disappointed as I thought that the waterfall carried little water. And now,… ...Read More 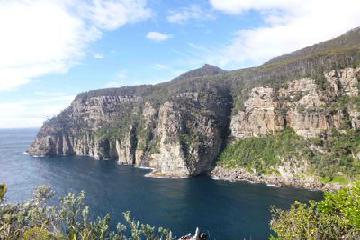 Waterfall Bay Tasmania April 11, 2015 6:14 am by Caedence Kuepper - Waterfall Bay is one of the most unique and beautiful waterfalling locations in Australia. The falls consists of very tall waterfall plunging into the sea, plus a couple of smaller falls further upstream. The main falls can be easily seen from a lookout at the start of the track, while the other two waterfalls are… ...Read More