Wentworth Falls was perhaps the most scenic waterfall in the Blue Mountains.

It was certainly our favorite waterfall in this region though admittedly our sampling of waterfalls here was quite limited.

It was a very tall waterfall with two main drops, where the upper drop was easily seen while the lower drop was mostly blocked from the cliffside viewpoints we were at (see photo above).

Nonetheless, we felt lucky upon our November 2006 visit to the falls because it was flowing quite well at a time when we had feared the worst given Australia’s multi-year drought.

Moreover, the storm that was upon us had cleared just long enough for us to be able to see the falls instead of a bunch of clouds obstructing the view.

Speaking of timing, we had seen plenty of photographs in the literature showing the falls not flowing very well.

We can’t say how reliable this waterfall would be considering we only visited it on one occasion.

We also don’t know how it would flow compared with the nearby Katoomba Falls, which we actually visited twice – once in Spring 2006 and once in Autumn 2008 – under nice flows.

However, I’d imagine our Katoomba Falls experience would be somewhat similar to the Wentworth Falls experience given that they weren’t far from each other, and they seemed to be the major falls of the area.

Julie and I had to walk from the car park near the corner of Falls Rd and Wentworth Rd (see directions below) to a pair of lookouts that allowed us to get decent views of Wentworth Falls.

I’m sure there might be more lookouts in addition to the ones we checked out, but I’ll only describe the ones we did.

We actually had a choice of direction to go because Sir H Burrell Rd and the end of Falls Rd formed a loop.

For minimum walking, we would start from the Falls Rd/Wentworth Rd intersection, then continue walking south on Falls Rd as it curved to the right to become Sir H Burrell Dr.

The first lookout was the Wentworth Falls Lookout on the left, but that did not yield the best views of the falls.

A short distance beyond the Falls Lookout on the Sir H Burrell Dr, there was a trail on the left towards the Princes Rock Lookout.

After about 200m of walking that trail, which also included some stairs, the path ended at the lookout with the frontal views of the falls as pictured at the top of this page.

This lookout also featured expansive vistas framed by the Princes Rock itself.

While Julie and I did this walk going in the opposite direction from the more straightforward route described above, all throughout the walk to get to and from the Princes Rock Lookout, we saw other trails that would have taken us closer to the lower waterfall, the nearby Queens Cascades, and the Overcliffe Track.

However, since we didn’t do those other tracks to the other waterfalls given that most of the tracks were closed during our visit (which the unstable weather didn’t help much with either), we can’t say more about them until we come back here and try again.

Wentworth Falls resides in the Blue Mountains National Park near Wentworth Falls in New South Wales. It is administered by the NSW National Parks and Wildlife Service. For information or inquiries about the area as well as current conditions, visit their website.

The Wentworth Falls township is about 100km (1.5-2 hours drive) west of Sydney CBD (Central Business District, or the city centre). Take the Great Western Hwy (M4/A32) towards Penrith, which then becomes Hwy 32 as it winds upwards into the Blue Mountains.

While still on Hwy 32, look for Falls Road on the left (heading south) while in the Wentworth Falls town. Follow this road to its end (about 1.5km later) where I recalled there was some signage ultimately leading us to one of a couple of small car parks and lookouts (or walks to them).

If headed east on Hwy 32 from Katoomba or Leura, then turn right onto Valley Rd. Follow Valley Rd (which becomes Fletcher St after 1.2km) for about 1.7km to Falls Rd. Turn right onto Falls Rd and take it to its end. 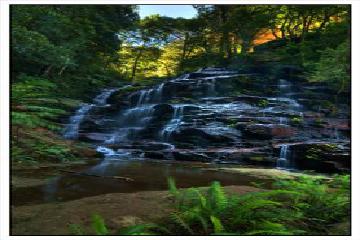 Sylvia Falls October 23, 2009 11:46 am by Herbert - First of all, thank you very much for this great site! Part of the Wentworth Falls - at the very end of the round track. I would say this waterfall is about 15m tall ...Read More