Julie and I anticipated a visit to Wollomombi Falls considering there had been a fair bit of literature devoted to it as being one of Australia’s tallest single-drop waterfalls at a reported 220m (or 260m according to the signage here).

I’m sure there would probably be some academic debate over this.

But in any case, we happened to have visited this waterfall with a somewhat disappointing low flow though it was still visible from the handful of viewpoints across the Wollomombi Gorge.

Adding to the disappointing visit was that the morning we showed up in May 2008, all the viewpoints faced against the sun.

Meanwhile, the shadowy gorge ensured that the waterfalls would either be concealed by darkness or the sunlit regions would be blown out in our photos.

Indeed, Julie and I are due for a return trip to see this waterfall the way it was supposed to be seen.

Nevertheless, on our lone visit to Wollomombi Falls, we spent about 40 minutes at the Falls Lookouts.

We went as far as the Checks Lookout some 400m away from the car park.

Maybe we’ll have more to say about this place if we’re fortunate to return here under more “normal” conditions.

The name of the falls was said to be derived from an aboriginal word “Wollumbi” roughly meaning “meeting of waters.”

I presume the meeting of waters pertained to both Wollomombi Falls and Chandler Falls converging into the Chandler River deep in the gorge.

Julie and I could barely see Chandler Falls cascading its way down the gorge opposite Wollomombi Falls due to its low flow and bad lighting conditions.

Certainly under more normal waterflow (and more agreeable lighting conditions), this waterfall pairing would certainly be quite the sight to behold.

As for an explanation of the low waterflow, apparently this section of the Oxley Wild Rivers National Park was still recovering from drought conditions.

Some drainages like the one responsible for Tia Falls was flowing quite well.

Apparently the Chandler River drainage suffered the same fate as the latter two.

We also noticed some agricultural developments in the area.

Naturally, this made us wonder whether the health of the drainages might have been adversely affected as a result of the clearing that might have taken place further upstream.

Wollomombi Falls resides in the Oxley Wild Rivers National Park near Armidale in New South Wales. It is administered by the NSW National Parks and Wildlife Service. For information or inquiries about the area as well as current conditions, visit their website.

The falls is accessed off a well-signed turnoff about 38km east of Armidale along the so-called Waterfall Way (i.e. the Armidale-Dorrigo Road, Hwy 78).

The turnoff was about 15km east of the turnoff for Bakers Creek Falls. 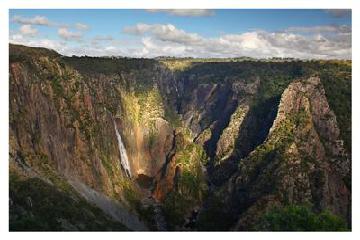 Wollomombi Falls News Years Eve 2011 January 7, 2012 2:18 am by Andrew Thomas - After visiting the Wollomombi Falls recently, I was looking at further NSW waterfall info and came across your great site. Really enjoyed your travels and thought this pic may be of interest. Like you, we are on a quest....to visit every National Park in the USA - its a long way from Australia! So far… ...Read More 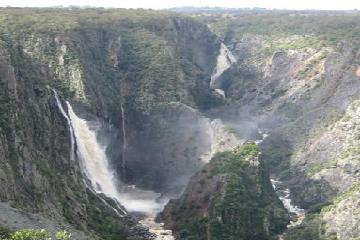