The Aliso Viejo Waterfall was something that I would have never guessed would exist as it sat amidst a bustling and continually sprawling suburban area.

Indeed, in well-developed suburban cities like Aliso Viejo, I tend to think developers would prefer rolling hills and flatlands over steep canyons and mountains.

As a result, waterfalls in such suburban environments were quite rare.

So with the unfavorable geology along the Aliso Creek drainage around the Aliso Viejo Falls, even having this waterfall was a bit of a minor miracle despite its modest 5ft or so drop.

Even though Aliso Creek had a fairly sizable watershed starting from the Santa Ana Mountains and fed by seven tributaries, it tended to have pretty sporadic and short-lived flow.

That means, it would typically only flow shortly after heavy rainfall or at least after a series of storms to ensure the creek had enough water.

I guess with the combination of the geology, the short viewing window, and the poor water quality of Aliso Creek (which I’ll get to later), there was little wonder in why this waterfall wasn’t more well known.

That said, this was especially amazing given how many people lived around it and how easily accessible it was.

Walking to the Aliso Viejo Waterfall

Speaking of accessing the Aliso Viejo Waterfall, once we pulled up to the cul-de-sac at the entry of the Journey School (see directions below), it was a short stroll across the Foxborough Park.

This was essentially a paved two-lane trail that skirted alongside Aliso Creek.

We headed to our right to proceed along this trail in the downstream direction.

Shortly after the vegetation started to conceal Aliso Creek, there was a path flanked by sticks between tall bush leading to both the brink and ultimately the base of the Aliso Creek Falls.

It probably took us about 15 minutes away from the car to fully experience this falls, making this spot pretty family friendly, especially if bringing kids.

We probably could have continued along the paved part of the trail like so many other families and recreationalists did.

That would yield a little more exercise though it wasn’t necessary in terms of experiencing the Aliso Viejo Waterfall itself.

The Water Quality at the Aliso Viejo Waterfall

While we stood before the Aliso Viejo Waterfall, we had to keep a close eye on our daughter who gravitated towards its foamy and smelly plunge pool.

Indeed, despite the child-friendliness of the trail and the falls itself, the foul odor of the water definitely made us a bit concerned about the water quality of Aliso Creek.

We definitely worried about the possible bacteria levels that our daughter would be exposed to if she wasn’t diligent about washing her hands or spending too much time around the spray of the falls.

I guess the pollution shouldn’t be surprising given how many communities further upstream would discharge urban runoff and wastewater into the creek.

These communities included Mission Viejo and Laguna Hills among others.

Yet even with the bad water quality, I did notice some interesting birds and ducks swimming in the calmer parts of the creek.

This suggested that Aliso Creek might also act as somewhat of a wildlife sanctuary amidst the urban jungle.

Is the Aliso Viejo Waterfall legitimate?

Finally, while examining the underlying surface beneath Aliso Creek at the waterfall, I couldn’t help but wonder if the Aliso Viejo Waterfall itself really bordered on being legitimate or not.

I say this because it appeared that there was some kind of dirt-like concrete spread over boulders as well as the gaps between them.

It was hard to tell whether this was man-made concrete or some kind of naturally occuring bedrock.

However, from examining the surface from the top of the falls, it seemed to me to be manmade.

Whatever the case, if it wasn’t for this surface, this waterfall would have been nothing more than a stream weaving between the gaps in the boulders.

In the end, I gave the benefit of the doubt in the scenic rating score for this waterfall though it could easily be downgraded to 0 if indeed this waterfall turned out to be manmade.

The Aliso Viejo Waterfall resides in Aliso Viejo in Orange County, California. It is administered by the City of Aliso Viejo. For information or inquiries about the area as well as current conditions, visit their website.

For us, the easiest way to get to the Aliso Viejo Waterfall (and avoid the toll roads) was to follow the I-5 south beyond Tustin and Irvine, and heading towards Mission Viejo.

We got off the I-5 Freeway at the Alicia Parkway, then turned right to head south in the direction of the ocean.

We remained on Alicia Parkway for about 2.5 miles (passing by a few traffic lights) before turning right onto Pacific Park Drive.

Once on Pacific Park Drive, we then kept left and turned left onto Deerhurst after a quarter-mile from Alicia Parkway.

Once on Deerhurst, we passed between a few condo communities before making another left onto Foxborough after about another quarter-mile.

We then followed Foxborough all the way to its cul-de-sac where we found street parking right near the entrance to both Foxborough Park and Journey School.

Overall, this drive was roughly 50 miles from Downtown Los Angeles (which would take about an hour without traffic). The drive would be around 15 miles (or a little less than 30 minutes) from Irvine, and it would be about 8 miles or 15 minutes drive from Laguna Beach. 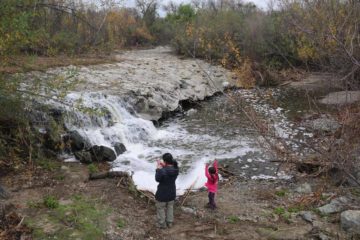