In our experiences, there was no way to see the entire waterfall from any one spot.

After all, it came down in multiple tiers as it twisted and turned on its way down with plenty of canyon walls and trees in the way to ensure we never got a totally clean view.

However, just the main tier alone was attractive and tall (maybe some 150-200ft or so) and certainly worth the effort to drive all the way here.

In fact, we liked this waterfall enough to place it on our Top 10 List of Best Southern California Waterfalls.

Experiencing Big Falls over the years

The first time we attempted to visit this waterfall was back in late Spring of 2005 when they closed the trail to the viewpoint below the falls.

During that trip, we had to settle for views from across the canyon at the Forest Falls community.

We would eventually figure out that they closed the trail due to the presence of snow and high water on a creek crossing (more on that in the next section).

Five years later, we came back in the Summer, and we were pleasantly surprised at its satisfying flow (especially considering it was August and in the middle of fire season).

On that visit, they opened the trail leading to its lookout, and we even got to see some of the hidden aspects of its drop.

The waterfall did well that year because 2010 happened to be a high rainfall year so I’d imagine its decent flow that far into Summer wasn’t typical.

Another five years after that, we returned in the Spring, but it was during a fourth consecutive year of drought.

Nevertheless, we brought our four-year-old daughter who seemed to enjoy a pretty healthy flow from a dumping of snow that occurred the prior week of this visit.

Of course, that snow was rapidly depleting thanks to record high temperatures at the time, but it entured that Big Falls would have a healthy flow on that visit.

Indeed, given the variety of circumstances we’ve seen this falls, it never seemed to disappoint.

Big Falls Trail Description – the short trail to its lookout

After parking the car and displaying a Forest Adventure Pass (see directions below), we followed a trail that went left (downstream) along Mill Creek.

A short while later, we had to cross Mill Creek.

In our experiences, this creek crossing was low enough to be nothing more than rock hopping to stay dry.

That said, I could totally imagine how it could not be safely crossed during the peak snowmelt period of Spring.

In fact, that could have explained why this trail was closed on our first visit back in May 2005.

Once we went past Mill Creek, we then continued to follow the straightforward trail eventually taking us into the drainage of Falls Creek.

Shortly thereafter, the trail climbed as it hugged the right side of the narrow canyon before stopping at a railing with a decent but distant look at the main drop of Big Falls.

It was a good thing I had a telephoto lens to better capture the waterfall in photos.

Otherwise, the falls would look pretty small with most normal zoons.

This would typically be the end point of the excursion, which would end up being about 0.6 miles round trip from the trailhead parking lot.

For a relatively safe and family-friendly way to extend a visit to Big Falls, we allowed our daughter to take off her shoes and play a little bit by the delta where Falls Creek was close to joining with Mill Creek.

Even though the cascades down here were quite small, this part felt more accessible from a relaxing and playing standpoint.

Our daughter didn’t seem to mind the icy cold water of Falls Creek.

Other families were also doing the same thing.

Meanwhile, others managed to find spots along the larger Mill Creek, especially if Falls Creek was a bit on the busy side (which it can be on weekends).

Scrambling to the Hidden Tiers of Big Falls

Now while I don’t advocate scrambling off trail, Mom and I followed a couple of middle-aged guys who indirectly showed us the way up even higher than the official viewpoint.

This involved a bit of stream walking (good thing we had Gore-tex boots) and rock scrambling all the while avoiding poison oak and a couple of fallen trees.

After another 10-15 minutes more of scrambling, Mom and I ended up seeing a couple of tall vertical hidden tiers that would’ve otherwise not been seen.

These sections of the falls really reminded me of a taller version of Fish Canyon Falls, and I believe this was what made the scramble worthwhile.

However, it was dangerous enough where both Dad and Julie stayed behind (and I definitely wouldn’t recommend children, pregnant women, nor seniors try it).

Had those two guys not have already scrambled up and gave Mom the idea of following them, we wouldn’t have made the attempt.

Thus, I could totally envision why fatalies have happened here before.

Still, I thought I had seen worse scrambles than this, and if you come prepared and respect Nature enough to be willing to turn back when the conditions wouldn’t allow for you to proceed, then perhaps it might be worth a look to see if the scramble is for you.

But again, be cognizant and respectful of the rockfall danger as well as the slippery rocks.

When we had our fill of this overlook and scramble, we then returned to the somewhat open area at the very bottom of the cascades beneath Big Falls (before the trail started climbing).

Big Falls resides in the San Bernardino National Forest in Forest Falls in San Bernardino County, California. It is administered by the USDA Forest Service. For information or inquiries about the area as well as current conditions, visit their website or Facebook page.

To get to Big Falls from downtown Los Angeles, we would take the I-10 east until we reach State Hwy 38 (Orange Ave).

At first, Hwy 38 passes through the suburban streets of Redlands, but eventually, it becomes a more full-blown mountain highway.

After about 15 miles or so, Hwy 38 junctions with Valley of the Falls Drive at a hairpin turn.

We would take Valley of the Falls Drive on the right, and then follow this road through the Forest Falls community before turning left onto the large parking area for Big Falls (it’s just beyond the end of town).

Parked vehicles must display an Adventure Pass here, and we were able to purchase one on the spot at this lot.

It took us about 90 minutes of driving from around the 60/57 Freeway junction (near Rowland Heights or Diamond Bar) towards Forest Falls.


Left to right sweep of the lowermost cascades


Fixated on the falls as seen from the Forest Falls community 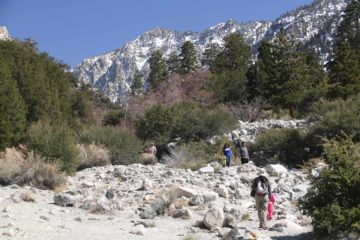 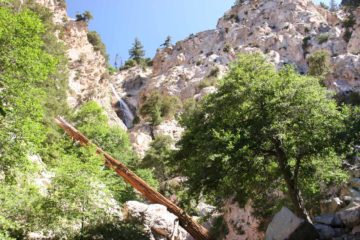 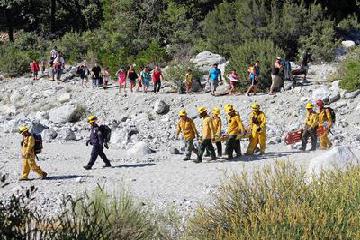 beautiful, but dangerous (Big Falls) August 23, 2015 8:05 pm by _Anonymous221 - The falls themselves are beautiful, but too many people visit it now and there are often over 1000 visitors in a weekend. According to locals in Forest Falls, there is a rescue almost every day now - sometimes more. We saw tons of trash on the trail and lots of graffiti. Yuck. Past the railing… ...Read More 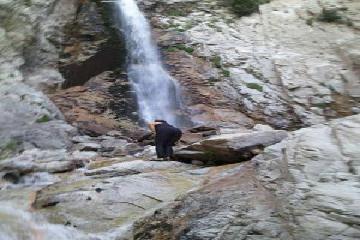 something local (Forest Falls) June 25, 2012 7:10 am by Genevieve - my boyfriend and i were looking for a place to enjoy nature. weve been all over the area but never forest falls. we tried it and climbed all the way up with our little maltese, she was a fighter, till we could not climb anymore. it was a very pleasant view looking from the bottom… ...Read More
Forest Falls more than just Big Falls February 27, 2011 5:56 am by David Doyel - There is a lot of unknown in the valley of the falls. First, when you turn off the hwy is the Monkey Face Falls with the profile rock of a monkey head. The falls is normally a trickle except for heavy rains and snow melt. The best part of Big Falls is going past the… ...Read More 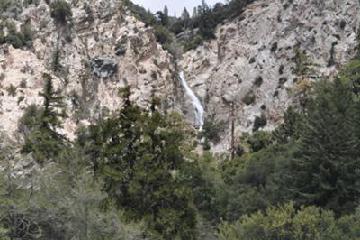 Forest Falls , CA May 16, 2010 3:17 pm by Janice Carabine - We took a long hike up to Forest Falls yesterday for the first time and loved it ! The falls are flowing well and the stream below is low enough to cross to see it. Be prepared to get wet ! ...Read More