The Black Swift Falls (or “Ragged Point Waterfall” as we tended to refer to it) was an intermittent waterfall on Young Creek that we had an opportunity to visit on our very first trip to Big Sur back around the late March 2001 time frame.

Unfortunately, we were neither well-researched nor well-prepared on that trip so we wound up not doing it.

It wasn’t until over 17 years later that I finally had the opportunity to do this hike.

However, it was at the end of a particularly vicious Dry Season (yielding California’s deadliest and most damaging wildfires to date statewide) so it had no chance of flowing on this visit.

The course of the intermittent Young Creek actually went through the grounds of the Ragged Point Inn Property.

The trail leading down to the base of the waterfall began from a wedding gazeebo and lookout.

It then steeply clung to the crumbly and rugged sea cliffs all the way to the small beach at the very bottom.

The Black Swift Falls was neither visible from the property nor from its cliffside lookouts.

Therefore, in order to experience it (let alone see it), I had to make the hike to the bottom where it was possible to look directly up the gully carved out by Young Creek.

Speaking of the trail, even though it was short from a distance standpoint (merely a quarter-mile or so in each direction), it was not easy by any stretch of the imagination!

Basically, after the first few wooden steps from the lookout, the trail quickly degenerated into a steep, slippery, and very rugged and worn path that seemed to haphazardly traverse eroding slopes.

In some parts, the trail even undulated to get around small landslips.

Thus, it was clear that there had been past evidence of trail infrastructure (e.g. a railing on a small bridge) that the current trail now avoided.

I got the feeling that the trail will continue to be a haphazard path where Nature will reclaim some parts thereby resulting in new trails being formed.

And this pattern will persist until the trail itself will become impassable from a safety standpoint (at which point Nature for sure will reclaim it).

In any case, after getting past a shaded section where I ducked under the branches of a windswept tree, the path then descended directly to the rocky base.

That was where the hike went from a rugged cliff-hanging hike into a degenerating four-limbed scramble down rocks with minor dropoffs.

It took me about 25 minutes to do this descent with a pair of hiking boots and hiking pants (as I was brushing up against some craggy bushes).

While I took my time and other people took less time than I did on this descent, I was definitely glad in hindsight that I didn’t attempt to do this hike in Chacos or beach sandals.

That was something that I seriously considered back on our first stay in this part of Big Sur in 2001.

Anyways, once at the bottom, I did some rock scrambling to check out the small beach, where the lack of dry sand was an indicator that this area can be under water in high tide.

I also did other scrambling further upstream on the rocky gully towards a pond, where I’d imagine the base of the Black Swift Falls (or “Ragged Point Waterfall”) would be.

Further up the jumble of rocks (making the lower portions of this waterfall more of a cascade), there was a more classical vertical drop near the top of the cliffs.

The only evidence of the watercourse was a noticeable vertical trail of dry grass growing on the cliff itself.

It looked like a rather steep and dangerous scramble to even make it up that high to the base of this main drop so I was content to imagine the waterfall from the rocky pond just upstream from the beach.

After having my fill of this spot, I ascended back up to the Ragged Point Inn property, where it only took me around 10-15 minutes to finish the ascent.

Indeed, this was one of the rare instances where going up seemed easier than going down given the steep ruggedness of this ever-evolving trail.

Black Swift Falls resides on the Big Sur Coast at Ragged Point near San Simeon in San Luis Obispo County, California. To my knowledge, it does not belong to a reserve or some kind of overseeing authority. However, if you’re looking to do this excursion and want to inquire about current conditions, you might have some success asking someone at the Ragged Point Inn. More information is available at their website.

Technically, this was in San Simeon, whose main part was further south along the coast.

During our visits, there had been enough parking even for day visitors, but then again.

Then again, we have also seen the lot get quite full on busier weekends and holidays where people were relegated to trying to find parking along the shoulders of the main highway. 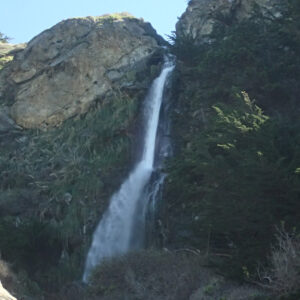 Black Swift Falls July 3, 2021 10:47 pm by Lew Lamar - I have a few photos of Black Swift Falls, taken Feb 24, 2017. We were staying at Ragged Point Inn, and Highway 1 was closed north of there. I discovered the falls just by walking around. That was a wet winter, so the falls were flowing real well. ...Read More

Black Swift Falls July 3, 2021 10:47 pm by Lew Lamar - I have a few photos of Black Swift Falls, taken Feb 24, 2017. We were staying at Ragged Point Inn, and Highway 1 was closed north of there. I discovered the falls just by walking around. That was a wet winter, so the falls were flowing real well. ...Read More