Burney Falls was hands down the most spectacular waterfall we encountered on our trips to the far north of California.

Not only did this waterfall have fairly impressive dimensions at 132ft in height along with a width that appeared to be wider than its height, but it also had a deep sapphire blue aquamarine plunge pool.

Moreover, it had a rather unique characteristic where most of its 100 million gallons of flow came out from the middle of the cliff.

The rest of the overflow of Burney Creek spilling over the top.

Yep, it was one of those rare waterfalls where you can have a waterfall fall on top of another waterfall!

Apparently, this place was so well-loved that even Teddy Roosevelt referred to it as the Eight Wonder of the World.

We even met a local back at the McCloud Falls who scoffed at places like Mossbrae Falls due to the presence of Burney Falls.

So with all the hype that went into this place, we knew that generally coming in with high expectations was a recipe for disappointment.

However, Burney Falls certainly met those lofty expectations, and it even earned a spot on our Top 10 Best California Waterfalls List as well as the even more exclusive Top 10 Best Waterfalls in the USA List.

Our visit to Burney Falls consisted of more gawking and less walking.

From the day use parking lot (see directions below), it was a mere 150 yards to reach the first overlook of Burney Falls.

Indeed, this first glimpse of the falls was between an opening in the trees.

It merely teased us into getting down to the bottom after having our fill of the limited top down view.

Backtracking then descending along the paved ramp over two switchbacks (so it was wheelchair-accessible), the ramp offered us the ability to get frontal views of the impressively wide falls.

At the second switchback, we were able to get an angled view across Burney Falls.

This allowed us to examine more closely how a large portion of the wall of water filling out its breadth came from springs percolating out from the middle 2/3rds of the cliff.

Given that most of Burney Creek seeped into underground aquifers which then re-emerged as the falls coming out of springs, this meant that it was a rare year-round waterfall.

Apparently, it also had a relatively constant temperature thanks to the regulation properties of the aquifers, which were shielded from the elements.

We’ve heard that Burney Creek at the surface could slow to a trickle or go dry, but it was the springs that would keep the rest of the waterfall going even as we got deeper into the hotter and drier months of Summer.

As we continued walking down the ramp past the second switchback, we had opportunities to scramble onto the boulder field separating the walkway from the edge of the sapphire blue aquamarine plunge pool.

This was where we managed to get our most direct views of Burney Falls, and we weren’t alone in our thinking as dozens of other people took advantage of the access as well.

Towards the bottom of the ramp, there was a viewing area with a bit of a more angled and non-optimal view back at Burney Falls.

From this vantage point, we were able to get a closer look at some more springs continuing to feed Burney Creek a little further downstream from the wall of water that was Burney Falls.

Anyways, for all intents and purposes, this was our turnaround point as we preferred the more frontal views of the falls.

Mom and I chilled out at the base of the falls and a little higher up the ramp as well for a pretty solid hour or so.

The spray from Burney Falls provided us some relief from the hot Summer afternoon.

It really reminded us of the restorative powers of Mother Nature when left to its own devices.

Mom and I were also patiently waiting for the sun to re-position itself where we were hoping that the entire width of the falls would be in light.

However, it seemed like its trajectory was such that there was always some part of the falls in shadow since the sun was essentially positioned behind the brink of Burney Falls.

And while we were contemplating this falls, we were reaching back into our memories to see if there was another waterfall like this.

The closest ones that I could think of were the Shiraito Waterfall on the slopes of Mt Fuji in Japan or the Hraunfossar in Iceland.

Possibilities of extending our visit at Burney Falls

The trail to the bottom of Burney Falls actually kept going beyond its lowest viewpoint though it became a bit more primitive.

While it would certainly mean a more secluded and quieter experience to keep going, we observed that the rest of the four-mile loop trail wouldn’t provide any more different or fulfilling views of Burney Falls.

It would merely be to just get away and to immerse oneself even deeper into the Nature on display here.

When we finally had our fill of Burney Falls and walked back up to the ramp, we then did a little exploring further upstream of the falls.

Even though we weren’t able to get close to the waterfalls and experience it from its brink, some people pointed out to us that there was an eagle’s nest perched atop a leaning tree right by the falls.

So that little surprise kept us occupied for a bit longer as we watched a young eagle tentatively flapping its wings as it still hadn’t learned how to fly yet.

Indeed, there just seemed to be a magical air about the Nature here during our visits.

As a result, we spent almost two hours here but the walking for just the complete falls experience was merely a mile or less round trip (maybe taking 15-20 minutes tops thanks to the wheelchair-accessibility of the trail).

Burney Falls resides in the McArthur-Burney Falls Memorial State Park near Burney in Shasta County, California. It is administered by the California Department of Parks and Recreation. For information or inquiries about the area as well as current conditions, visit their website.

We’ll pick up the driving directions from the city of Redding since it seemed to be the hub for activities concerning Mt Shasta, Lassen Volcanic National Park, and Whiskeytown.

We actually stayed at Red Bluff, which was an additional 30 miles or 30 minutes further to the south along the I-5 of Redding.

We’ll also describe the directions from the town of Mt Shasta.

Driving from Redding to Burney Falls

Taking the I-5 north through Redding, we then exited the interstate and took the Hwy 299 east.

We followed Hwy 299 for roughly 55 miles through the town of Burney (which appeared to be a major pulp mill and logging town about 50 miles northeast of Redding).

Then, we turned left onto the Scenic Highway 89.

After around 5 miles north along Hwy 89, we turned left into the well-signed entrance area for the MacArthur-Burney Falls Memorial State Park.

At the entrance kiosk, we paid $7 (since Mom was considered a senior so she got the $1 off the normal day use fee of $8 during our June 2016 visit).

Then, we promptly parked the car at the day use parking lot for the falls shortly thereafter to our left.

The road actually kept going beyond this day use area towards some campgrounds as well as a boat launch area, but we didn’t need to pursue those to visit Burney Falls.

Anyways, this drive would require around under 90 minutes or so to cover the 64 miles from Redding to here.

From Mt Shasta, we’d take the I-5 south for just under 2 miles to its junction to Hwy 89.

We’d then follow Hwy 89 southeast for roughly 50 miles (requiring around an hour’s drive) before turning right into the state park entrance and kiosk.

And if you’re curious about where Lassen Volcanic was relative to Burney Falls, its northern corridor by Manzanita Lake was about 42 miles further to the south along Hwy 89 (taking under 50 minutes according to GoogleMaps).

Anyways, when we did the drive from Burney Falls to Mt Shasta, it took us a little over an hour (though we took longer due to a detour to the Clear Creek Trailhead on Mt Shasta’s southeastern slopes).

Examining burney falls from the overlook, including the springs flanking the main drops 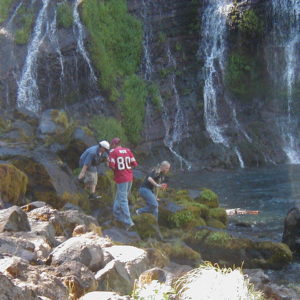 Burney Falls March 3, 2021 1:26 pm by Brian Jeppesen - This was always one of my favorite places to go when I lived in California. I think I went over 10 times. I camped there twice and camped near by near Mt Shasta City many times. The water came from springs just a short distance up Burney Creek and came down the creek to the… ...Read More 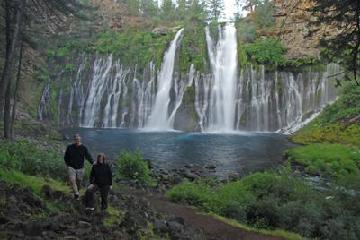 Burney Falls – Burney, California September 1, 2010 5:03 pm by David Blackley - Hello Glad to know there are waterfall lovers like myself. I am enjoying the website. I thought I would post to you a picture of a waterfall in California that is northwest of Tahoe. It is called Burney Falls. I did not see it on the web site and thought I would give you the… ...Read More