Cooper Canyon Falls was a waterfall that was quite close to the LA Basin as the crow flies, but it was actually one of the more distant ones we’ve visited.

Getting there involved a fairly long drive on the twisty Angeles Crest Highway (see directions below).

However, the apparent distance also meant that we were in scenery that seemed more like something we might have expected in the Sierras than our local mountains.

Indeed, we saw lots of giant pine trees that reminded us very much of sequoias, and just being around this waterfall in such settings seemed appropriate for a more wild place like this.

As for the waterfall itself, it was said to be around 40-50ft high, and each time we’ve been here in the mid- to late Spring, it had a pretty healthy flow as long as there was a fair amount of snow accumulation during the Winter months.

Speaking of which, this was one of the first waterfalls that Julie and I had visited during our early years of waterfalling (we made our first visit here in 2003).

However, for one reason or another (fires, logistics, priorities, etc.), we weren’t able to re-visit it again until nearly 10 years after that maiden visit.

We also made a subsequent visit with our daughter, who managed some of the more riskier parts of the hike, which we’ll get to later in this write-up.

Speaking of the hike, we were looking at a distance of about 3.2 miles round trip, which would typically take us about 2 hours.

However, if the gate to the Buckhorn Campground is closed, then that would increase the hiking distance to about 5 miles round trip, and it would take us about 3 hours.

The difficulty rating at the top of this page reflected the shorter hike.

Hiking to Cooper Canyon Falls – Hiking to the Buckhorn Campground

On our first few visits to Cooper Canyon Falls, we actually had to hike from the Angeles Crest Highway to the Burkhart Trailhead (the main trail to the waterfall) since the gate to the Buckhorn Campground would typically be closed.

So this added about a mile in each direction to our overall hiking distance.

The flip side to the extra hiking was that the hiking experience was much quieter.

Indeed, the road to the campground as well as the campground itself was quiet, and the road continuing to the Burkhart Trailhead was already flanked by scenic redwood-like giant pine trees.

I guess since this area was said to be around 5,000-6,000 feet in elevation (which was similar to the elevation where Sequoia trees were present in the Central Sierras), perhaps it shouldn’t have been so surprising.

It was only on our most recent visit in 2016 did that gate finally open for vehicular traffic so that helped to reduce the overall hike.

Under those circumstances, we were able to drive right up to the day use parking area for the Burkhart Trail, and we’ll begin the next section of the trail description from there.

Hiking to Cooper Canyon Falls – Beyond the Day Use Parking Area

Beyond the day use parking area, we were on a dirt trail that gradually descended as it skirted Buckhorn Creek.

The canyon containing the creek deepened quickly as the stream passed over some smaller waterfalls that appeared to be accessible by off-trail scrambles.

The further we went on the Burkhart Trail, the even more deeper the canyon became.

As the Burkhart Trail went from shady groves of tall trees to exposed rocky cliff traverses, we’d eventually get to a part where the scenery really started to open up as the trail bent to our left.

It was around this point that the Buckhorn Creek disappeared quickly into the nearly vertical canyon below.

Since we could hear loud sounds of water crashing here, we suspected that this was where the elusive Buckhorn Falls could very well be.

Of course, we couldn’t conclusively find out from the trail since the canyon was way too vertical to even entertain the thought of cliff scrambling down to Buckhorn Creek.

Next, the trail skirted along mostly rocky cliffs as the elevation loss deepened a bit more than before.

The elevation loss was probably the greatest when we reached a switchback as the trail then skirted a different creek to our left.

Towards the bottom of the descent, the Burkhart Trail crossed Buckhorn Creek (at roughly 1.2 miles from the day use parking area).

This was the lone creek crossing on the trail.

This creek was also the starting point for the off-trail stream scramble up to Buckhorn Falls, which is described on a different page.

Shortly beyond the crossing of Buckhorn Creek, the Burkhart briefly climbed before descending once again towards the famous Pacific Crest Trail.

Keeping right at the trail junction (to continue following the creek downstream), we’d eventually reach the top of Cooper Canyon Falls after a few minutes.

We proceeded a short distance further as we were then faced with a steep gully to our left fronted by a section of reinforced trail.

Although we’ve made the mistake of scrambling down the first gully we’ve seen (which was quite steep), there was a more tame trail of use to the left just a short distance further along the Pacific Crest Trail.

The Steep Descent to the Base of Cooper Canyon Falls

Taking the tamer trail, the path then descended towards that first gully before reaching an even steeper section that had a rope to hold onto to facilitate the rather tricky (and often wet and muddy) last section of the descent.

While the rope was helpful, it was a quite slimy and dirty where it was wet at the bottom of the scramble.

The trick here was to descend with our backs turned to the dropoff so it would be like rapelling down the short cliff.

Note that each time Julie and I have done this hike, at least one rope was present, but I could easily envision this wouldn’t always be the case.

Without the rope, the descent would still be doable, but it would involve a bit more risk of falling.

That said, we were really cognizant of the risk that an aged rope could also pose for if the rope snapped here, a fall and tumble could lead to pretty serious injuries.

Anyways, once we made it to the bottom, we were finally at the bottom of Cooper Canyon Falls.

Depending on the flow of its creek, we’d often have to cross the creek in order to get a more direct look at the waterfall.

However, each time we’ve been here, it was around midday or early afternoon.

And unfortunately, that was also when we were looking somewhat against the sun while the harsh shadows could make taking photos quite a challenge.

So unless the skies were overcast or enough clouds were around to block the sun, photographing the falls was a bit under non-ideal conditions.

Despite the long drive and the bit of adventure to reach this spot, we’ve found Cooper Canyon Falls to be quite popular.

While it was by no means as busy as say Switzer Falls, it was definitely not a place to find solitude.

Nevertheless, when we were done visiting the waterfall, we still had at least 1.5 miles of uphill hiking at altitude.

This was where it could be a bit taxing (especially if altitude sickness would start to set in) so my advice would be to take your time and bring plenty of water to stay hydrated.

All in all, the round-trip hiking distance from the day use parking area to Cooper Canyon Falls and back was around 3.2 miles according to my GPS logs.

This took us around 2 hours round trip.

Cooper Canyon Falls resides in the Angeles National Forest near Pasadena in Los Angeles County, California. It is administered by the USDA Forest Service. For information or inquiries about the area as well as current conditions, visit their website or Facebook page.

To get to the Cooper Canyon Falls trailhead, we had to drive on the Angeles Crest Highway (Hwy 2) from La Canada-Flintridge just a few minutes north along the I-210 from Pasadena (itself minutes north of downtown Los Angeles).

From the Hwy 2 exit on the 210 freeway, we had to drive about 35 miles on the twisty Angeles Crest Highway.

Given the twisty nature of the road (and that it’s shared by motorbikers and mountain bikers alike), there was a lot of turning and swerving, which easily could cause car sickness for passengers (especially those seated in the rear).

Moreover, since you are eventually going to climb up to 5000-6000ft on the drive, it’s a good idea to check the road conditions by consulting the Caltrans website (enter “2” in the query for Highway number).

After nearly an hour on the Hwy 2 (depending on how well you handle the curves and how much you’re caught behind slower drivers refusing to use the pullouts), we passed by the turnoff for Mt Wilson as well as a remote cafe and bikers hangout called Newcomb’s.

Shortly after we passed the Mt Waterman Ski Area (there’s a large pullout and chair lift besides the Angeles Crest Highway), that was when we were on the lookout for the easy-to-miss Buckhorn Campground turnoff to our left.

Roughly 1.5 miles beyond the Mt Waterman Ski Lift, there was a narrow (but still paved) road descending right down to the Buckhorn Campground complex.

If the gate is open, then we were able to drive down into the Buckhorn Campground complex and follow the signs for the Burkhart Trail.

There was one spur road going over a concrete ford (I believe it was between campsites 26-28), which ultimately ended at the Burkhart Trailhead Day Use Parking Area, which was really more like a large cul-de-sac.

Since we were in National Forest land, we were supposed to display a valid Forest Service Adventure Pass.

There was also overflow day use parking to the west of the campground turnoff as well.

In either case, we’d then have to walk along the road leading to the Buckhorn Campground, and then to the official trailhead, and eventually the rest of the way to the falls.

The extra walk between Hwy 2 and the official Burkhart Trailhead added roughly 0.9 miles or so in each direction. 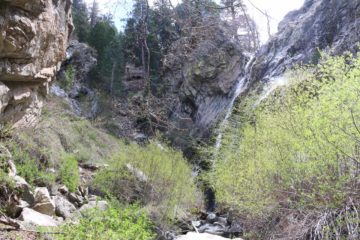 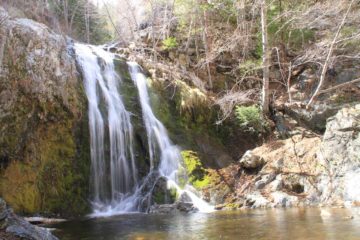