Cottonwood Creek Falls was a series of small waterfalls hidden away in the desert-like terrain near Pine Valley well downslope of Mt Laguna.

I think of this waterfall as kind of a miracle in that it paradoxically sits in an unforgivingly arid climate with cacti and other desert shrubs all around the area.

Indeed, while you may look at the photo above, you might think that this waterfall is nothing to be bragging about.

However, when you consider the environment it’s in, that’s what makes this spot quite special.

When Cottonwood Creek Falls would have good flow, it would most likely occur if Mt Laguna had accumulated enough snow so its snowmelt would sufficiently drain into Cottonwood Creek.

Therefore, that would leave a pretty narrow window in which this little oasis would come to life and provide that refreshing place to cool off from the unrelenting desert climate.

Our visit followed about two dry weeks since Mt Laguna had gotten a fair bit of snow from a series of strong storms in the first week of January 2016.

So while there was water in Cottonwood Creek during our visit, I’m sure the falls could have been a bit more impressive had the area received a few more of these strong storms followed by a visit not too long afterwards.

That said, this was one of those obscure waterfalls that seemed to be ignored by most of the visitors to this part of San Diego County.

This is especially the case since most people would typically visit Cedar Creek Falls or Three Sisters Falls.

In fact, we suspect that it tended to be ignored largely because this Cottonwood Creek Falls lacked any signs hinting at its presence.

This was further supported by the fact that we happened to be the only ones around when we made our late Saturday afternoon visit.

We’ve provided trailhead directions below to help get you started if you’re interested in discovering this little gem for yourself.

Once we got to the proper pullout, we then crossed the Sunrise Highway to its east side adjacent to the guard rails.

Next, we followed the guard rails north (uphill) towards its end, where there was a power pole as well as a faint trail right beside it.

This trail descended through the prickly overgrowth and into the ravine itself.

The overgrowth and steepness of the terrain was only uncomfortable in the beginning as there was also a cactus patch adjacent to the trail in this stretch.

In fact, I might have gotten pricked by one of the thorns that went into the side of my hiking boot.

However, the further down we went, the wider and flatter the trail became.

The trail would meander like this for the next 3/4-mile or so as it would follow the line of power poles towering above us.

I suspected that this trail (and the waterfall discovery) could probably be a result of power company workers setting up the infrastructure then chancing upon Cottonwood Creek Falls as the work trail was created.

We started to notice hints of Cottonwood Creek and its small waterfalls to our left as we were near the bottom of the descent.

Anyways, the trail would ultimately end its descent at a T-intersection, where we then turned left to go upstream along Cottonwood Creek to get up to its waterfalls.

After a few more minutes of hiking, we then were side-by-side with several of the small tiers of Cottonwood Creek Falls.

I’d suspect that each of the first few drops were on the order of 10-15ft or so.

The trail became rockier and flanked with cacti and other desert foliage the further upstream we went.

Eventually, we got up to perhaps the uppermost and most impressive of the waterfall series, which you see photographed at the top of this page.

That last (uppermost) tier was probably roughly 15ft or so tall.

I did manage to climb the steep slope adjacent to this drop of the falls just to see what else was further upstream.

However, it just seemed to be more rocks and desert foliage so for all intents and purposes, this was my turnaround point.

Julie and I happened to hear the croaking of frogs or toads near the last waterfall (though we couldn’t see them).

This illustrated both the fragility of the ecosystem here as well as how seldomly-visited this place seemed to be.

We returned the way we came, and overall, Julie and I had spent about a little over an hour away from the car.

The hike itself was said to be about 2 miles round trip.

It seemed to go by faster on the way back to the car than on the way down, but I suspect that was because we knew where we were going on the return.

When we were descending from the Sunrise Highway, we weren’t quite sure where we were going because there was nothing in the area that would have ever had us believing there could be a waterfall found here.

Cottonwood Creek Falls resides in the Cleveland National Forest near Descanso in San Diego County, California. It is administered by the USDA Forest Service. For information or inquiries about the area as well as current conditions, visit their website or Facebook page.

Since we stayed in Julian on the day we visited Cottonwood Creek Falls, we’ll first describe the directions from there.

In order to get to Julian from Los Angeles, see the Cedar Creek Falls page.

So from Julian, we left Hwy 78 east of the town, then turned right onto Hwy 79.

We then followed the twisty Hwy 79 for about 23 miles all the way to the on-ramp with the I-8 east.

Next, we drove east on the I-8 for a little over 7 miles to the exit for the Sunrise Highway.

Turning left onto the Sunrise Highway, we then drove up the mountain for about 2 miles where we stopped the car at a very large but unsigned pullout area.

So we had to start looking for this pullout after passing the 15.0 mile post, but we knew we went too far when we saw the 15.5 mile post.

said it had a graffiti-covered rock wall, but it appeared to have been cleaned up on our visit).

Another thing about this pullout was that there was a lone graffiti-covered picnic table with a nice view back towards the I-8 and Pine Valley.

She recommended parking near the elongated rock wall because the unsigned footpath for Cottonwood Creek Falls started right across the highway from that wall where the north end of the guard rail ended.

Overall, this drive took us about 45 minutes.

Had we come from San Diego, the most straightforward route would be to take the I-8 all the way east to the Sunrise Highway.

Sunrise Highway was near the small hamlet of Pine Valley, where we would then take the Sunrise Highway north of the interstate up towards Mt Laguna for 2 miles to the very large pullout as stated above. 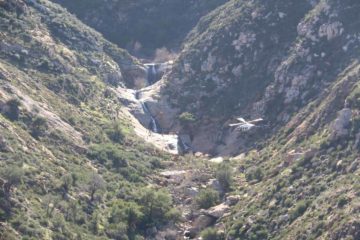 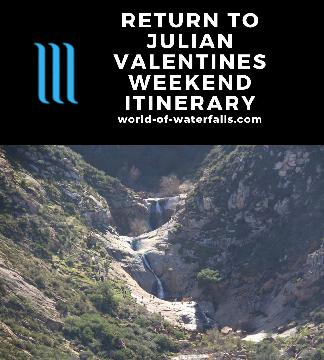