The Dana Point Waterfall (or Dana Point Falls) was something we weren’t really made aware of until recently when it popped up on one of the Orange County blogs.

Perhaps part of the reason why this place was so unknown to all but locals or those familiar with the Dana Point area was that this was a very temporary or ephemeral waterfall.

In other words, if you weren’t here in the middle of a storm with heavy rainfall, you’re not likely to see this waterfall flow.

Julie experienced this firsthand when it was raining in Los Angeles County, but when she showed up to this part of southern Orange County about an hour or two after leaving home, the falls was merely trickling.

It wasn’t until two weeks later when we were here in the middle of a fairly nasty rain storm that we finally got to see this waterfall in a state that you see in the photo above.

Indeed, this rain storm caused lots of local street flooding and people hydroplaning on the freeways so it was certainly quite the adventure even though this was a roadside waterfall.

Nevertheless, even if the falls wasn’t flowing, this little “oasis” was well-situated near the Dana Point Harbor beneath cliffs where expensive homes were perched above.

It was the kind of scene that we might have encountered further up the coast in Malibu, but here we were south of Laguna Beach in the scenic coastal suburb of Dana Point.

The Dana Point Waterfall was pretty much right off the road across the street from a park on the harbor front.

The falls itself was fronted by palm trees with the whitish and brown cliffs adding to the scenic allure of this spot.

Yet even despite the lack of physical exertion required to experience the Dana Point Waterfall, we do have to reiterate the catch-22 nature of this excursion.

Indeed, in order to see this falls perform, the timing has to coincide with heavy rain, which means braving the accident-prone driving conditions on the freeways and local streets.

The slippery conditions, and especially the likelihood of hydroplaning, must be respected.

In addition to the bad driving conditions, the waterfall itself was composed of suburban runoff from the community above the cliff.

Thus, the water would be bacteria-laced under stormy conditions, and we could certainly smell the refuse when we finally got to see this place in person.

Of course, under more benign conditions, the falls would be no more than a trickle so you definitely have to take the good with the bad with this one.

Just to give you an idea of how quickly this waterfall’s flow diminishes, we did make a third visit in between episodes of rain a few years later, and we saw the flow well on its way to trickling without another episode of rain in another hour or two.

As a result, given the ephemeral nature of the Dana Point Waterfall, I would marginally count this as a legitimate waterfall.

However, it was the scenic allure and oceanfront location that sort of gave this falls the benefit of the doubt.

So instead of a 0.5 or lower score, we opted to bump the score of this falls up to 1.

But as stated before, timing was everything with experiencing the spectacle of the falls.

The Dana Point Waterfall resides in the city of Dana Point in Orange County, California. It is administered by the city government of Dana Point. For information or inquiries about the area as well as current conditions, visit their website.

The fastest way that we were able to visit the Dana Point Waterfall from Los Angeles was to take the I-5 freeway all the way south to the Pacific Coast Highway 1 off-ramp (exit 5) near San Juan Capistrano.

From around the 91 freeway and I-5 interchange, this stretch of the drive took us about 45 minutes though we were driving pretty deliberately under the rainy conditions despite the relatively light traffic.

Once we got off the I-5 at the Hwy 1 ramp, we then followed the highway towards its end as it transitioned towards surface streets.

We kept on the left lane in anticipation of having to turn left.

Once we reached a traffic light at the junction of PCH and Dana Point Harbor Drive, we then made the left turn.

And once upon Dana Point Harbor Drive, we drove just under a mile where the Dana Point Waterfall could be clearly seen from the road on the right side.

However, legal street parking was on the east-bound side of the street so in order to park the car legally, we had to make a U-turn and then park across the street from the falls.

Additional caution must be made to cross the street to get closer to the falls given the potential high speed of traffic along this street.

That said, there was no fee for visiting this waterfall other than the cost of gas to make this drive.


Roadside view of the falls in between rains 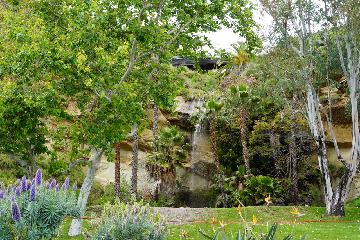