Falls Canyon Falls (also known as “Hidden Falls”) was an elusive waterfall that nearly defeated us as I’m sure it probably had done to many others.

In fact, we weren’t even aware of the existence of this 40ft falls until Julie stumbled upon an OC hiking blog as well as a photo showing that it had pretty good flow just two days prior to our late February weekend visit in 2016.

It was definitely not in any of our waterfalling hiking guides

And yet it was through those vague directions given on that blog that led us to some moments of frustration and even having a GEICO commercial moment.

In case you don’t know about that GEICO commercial, it was about Tarzan and Jane arguing amongst themselves about where to find the waterfall.

Of course, with that struggle, that made the elation of finally reaching the Falls Canyon Falls that much sweeter.

I guess there was a reason why they called this falls “Hidden Falls”, and this was despite the amount of vehicular traffic going right past the mouth of the canyon containing this waterfall.

prior to making our visit.

So was the effort and moments of mental anguish worth it?

Well, as you can see from the photo above, when it’s flowing, this waterfall was probably more scenic than the nearby Holy Jim Falls.

However, in addition to the rather obscure and hidden nature of this falls, we suspect that it might also have a short season.

What you see pictured above was merely three days after the last fairly significant rain storm that hit this part of Orange County in February 2016.

Granted, we had a rather unusually dry month of February where that storm was the lone one that replenished the watershed of Falls Canyon for the moment.

However, Julie said she saw a photo on the internet taken just two days prior to our visit showing even more waterflow than what we were able to witness.

Therefore, we suspect that unless there had been a bit of snow accumulation in the Santa Ana Mountains, this waterfall probably wouldn’t have much flow beyond a week of no rain after the last significant rain.

Our “hike” (which was more of a scramble) began from the hidden mouth of Falls Canyon.

The nearest pullout to the start of the scramble into Falls Canyon is given in the directions below.

You really have to pay attention to the canyon walls within Trabuco Canyon, and keep an eye out for a opening where a side canyon (Falls Canyon itself) would confluence with it.

Once that confluence is found, that was when we looked real hard for clues as to where to make the scramble to enter Falls Canyon.

Luckily, once we found the correct path, Julie spotted a steep gully that led down from the rough Trabuco Creek Road down to a log crossing traversing Trabuco Creek.

Immediately beyond the log crossing of the creek, we then spotted a trail-of-use that went over another fallen log before we were able to spot a small cave to our left within the mouth of Falls Canyon.

The cave wasn’t deep, and there really wasn’t a whole lot to see in there, but it was the key landmark that indicated to us that we were in the right place.

At this point, we pretty much followed the trail-of-use that was obvious in spots and tricky in others as we meandered along the seasonal stream responsible for Falls Canyon.

Some of the trickier moments involved scrambling over log jams, over rocks with dropoffs as well as narrow ledges, and all the while we were doing our best to minimize skin exposure to the ubiquitous poison oak.

That said, our five-year-old daughter was able to make it through most of this trail on her own, and she only required a little assistance from us in the trickiest spots.

Falls Canyon was remarkably quiet as it was apparent to us that this place was not that well-discovered.

So unlike some of the other local hikes we’ve been to where graffiti and litter would be a major problem, these eyesores were noticeably absent during our visit.

Let’s hope it stays that way, but I do fear that it’s only a matter of time before this place becomes a social media darling.

When that happens, then you’ll start to get people with little regard for Nature and start trashing the place (as had many other places that wound up in Yelp).

In the end, we spent about 45 minutes to get from Trabuco Creek Road to the dead-end right at Falls Canyon Falls, which according to our trip logs was roughly 0.6 miles in each direction.

We took a little less time on the way out (about 35 minutes; mostly because we knew where we were going) so I’d allow at least two hours for this excursion for both the hiking as well as some time spent just enjoying the waterfall.

We definitely wouldn’t attempt this hike if there was any threat of rain given how flooded Trabuco Creek can get.

The evidence of flash flooding from log jams within Falls Canyon itself attested to the inherent dangers here.

And speaking of safety around the falls, we noticed that there were some rope tied to hanging limbs against the nearly vertical cliffs surrounding the waterfall.

I’m sure some people have probably managed to throw caution to the wind and climb the ropes to continue further up Falls Canyon.

However, I shuddered to think how weather worn these ropes would be so we ignored them.

In any case, we were pretty content with experiencing the Falls Canyon Falls from its base before we headed back.

Falls Canyon Falls resides in the Cleveland National Forest near Trabuco Canyon in Orange County, California. It is administered by the USDA Forest Service. For information or inquiries about the area as well as current conditions, visit their website or Facebook page.

The driving directions for Falls Canyon Falls pretty much follows that of Holy Jim Falls.

So see that page for directions on at least getting to Trabuco Canyon and the rough unpaved Trabuco Creek Road.

Beyond this concrete ford, there’s a reassuring sign saying that the Holy Jim Trailhead was another 2 miles away.

Some of the literature from hiking blogs that are out there had us start the hike from here, which would make sense if parking further down Trabuco Creek Road is too limited or unavailable.

That said, I sometimes wonder if such blogs are being intentionally vague to keep the “Hidden Falls” hidden.

In any case, if this was the starting point of the hike, then we would still have to walk another 3/4-mile along Trabuco Creek Road before actually reaching the “hidden” opening for Falls Canyon.

So what we did was we continued driving Trabuco Creek Road for almost that 3/4-mile stretch (the road became even rougher and narrower along the way).

Paying very close attention to the canyon walls along Trabuco Canyon, I eventually saw the relatively hidden opening of Falls Canyon on the north side of Trabuco Canyon.

This would be where studying the topo maps

prior to making the visit helped a lot.

There was another roadside pullout along Trabuco Creek Road a short distance beyond the mouth of Falls Canyon.

Ultimately, this pullout was where we stopped the car and began hiking/scrambling towards Falls Canyon Falls.

If you somehow find yourself at the Holy Jim Falls Trailhead or even the Holy Jim Volunteer Fire Department, then you’ve gone too far.

Overall, this 58-mile drive from downtown Los Angeles to the mouth of Falls Canyon took us roughly 90 minutes or so.

This did not counting the extra hour wasted arguing about where the correct path to the falls was.

Sweep examining the Hidden Falls from a distance, then examining closely the algae and flowing water as I got right up to it. Finally, the movie ends by examining the surrounding cliffs before focusing back at the waterfall itself 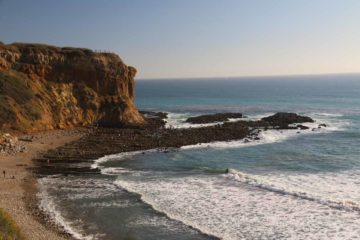