Green Valley Falls was really more of a Summer time swimming hole consisting of an upper and lower waterfall set.

During my early-season visit, I saw the potential for a very happening spot to cool off from the heat and take a dip in one of the potholes fronting the waterfalls.

Flowing on the Sweetwater River in the Rancho Cuyamaca State Park, it seemed to have a year-round flow.

That said, every time Julie and I have been to nearby Julian, it happened to be in the Winter time.

So it really wasn’t the time to go for a swim considering it was cold enough to snow here.

Typically, this would be a very easy waterfall to visit, especially if you happen to score a campsite in the Green Valley Campground.

That’s because the hike could be as little as a half-mile round trip to take in both of the waterfalls.

However, when I made my February visit in 2019, I had to park outside the campground (see directions below), then walk all the way to the Falls Picnic Area within the campground itself.

So that closure extended the hike to about 3 miles round trip, and this will be the manner in which I’ll describe this excursion below.

I’ve read that the Green Valley Campground is open from May to October.

I don’t have the exact details, but since I made my visit in February, a vehicular barricade blocked any further progress into the campground itself.

Thus, I had to figure out where to park before walking back to this spot.

I wound up taking the East Mesa Trailhead pullout, which was roughly 0.6 miles south of the Green Valley Campground entrance.

It turned out that I was supposed to take the East Trail, which followed along the Hwy 79 on a more undulating narrow path.

However, I ended up walking alongside the Hwy 79 for this stretch.

This was a bit on the awkward side because the road shoulders were always slanting with loose tar and dirt.

Once I returned to the campground entrance, I then had to cross the highway before continuing to walk alongside the deserted campground road.

After getting past some camp sites, the trail then went above some kind of concrete ford before veering left.

Most of the water in the river flowed beneath the ford during my visit so I didn’t have to worry about getting my boots wet.

After getting past the ford and keeping left, I then kept going straight.

Then, after a brief hill, the road descended to some kind of a signed wishbone fork for the Falls Picnic Area.

I kept left at this fork though I could have easily gone right to get to a different side of this picnic area.

Once I reached the Falls Picnic Area parking lot, it was then clear to me that this would have been the starting point for the hike had the campground been open.

To this point, I had walked about a mile from the East Mesa Trailhead pullout to get here.

From the Falls Picnic Area parking lot (the one I found after veering left from the wishbone fork), I then noticed small trail signs pointing the way to both the Upper and Lower Green Valley Falls.

I spotted these as that trail passed through a fairly extensive picnic ground.

At this point, the trail was on a dirt track as I finally left the concrete behind.

The trail signage prohibited dogs and smoking were not allowed.

Barely five minutes from the picnic area, the trail briefly descended before small series of steps.

Upon hearing the rush of falling water, I went over to a jumble of boulders where some fallen tree branches were organized to discourage any progress onto the boulder jumble.

I actually did go onto the boulders where I spotted the Upper Green Valley Falls.

This waterfall consisted of a pair of converging small (maybe 10-15ft) sections of the Sweetwater River going over the smoothed out channels of the bedrock.

Although it was possible to scramble right up to the plunge pool fronting this pair of waterfalls, I’m sure the campground authorities probably wouldn’t endorse it.

That’s due to the potential for injury on the slippery and rugged nature of this boulder scramble.

The arrangement of fallen tree branches and logs prior to the boulder scramble was probably about as clear of a signal they can give without putting a sign.

Back on the main trail, after going up a short set of steps, the vegetation opened up and provided a more distant and higher-vantage-point view of the Upper Green Valley Falls.

So even without doing the scramble to get closer, I could still see the falls from the main trail.

Continuing another 0.1 mile downstream on the main trail, I then found myself following along the northern banks of the Sweetwater River.

At first, it was pretty straightforward to follow the trail as it continued towards the top of the Lower Green Valley Falls that I knew was further up ahead.

However, when the terrain became rocky again, that was when the trail became slightly less obvious and some minor scrambling was necessary to proceed.

Next, I reached a small clearing with some signage indicating that a Fire Road was just 0.1 mile up the hill to the right.

Meanwhile, I could see to my left the Lower Green Valley Falls.

This waterfall was over a wider stretch of bedrock where the river descended over what seemed to be three tiers.

The first tier was a minor cascade between some pools.

The second tier was segmented into a pair of drops into individual pools or potholes that seemed perfect for a Summertime dip.

Finally, the last tier was a sloping cascade that didn’t seem as conducive to swimming.

I had to be real careful on the bedrock as I descended closer to the main tier because the footing was slippery given how some parts of it were wet.

Of the two Green Valley Falls, I found the upper one to be more photo friendly, but I found the lower one to have more of that fun factor.

Nevertheless, I could totally see why this place would be quite the popular hangout despite my Winter solo visit.

After having my fill of the Lower Green Valley Falls, I had an option of going back the way I came or going up the steps to the Fire Road.

I opted for the latter.

Once I made it the 0.1-mile back up to the Fire Road, then I followed the wider dirt road another 0.1-mile back past a road barricade to the other parking lot for the Falls Picnic Area.

This parking lot was on the other side of the extensive picnic area that separated the two lots.

After returning to the wishbone junction, I then returned the way I came.

According to my trail notes, it would have taken me around 40 minutes to experience both the Upper and Lower Green Valley Falls had I parked from the Falls Picnic Area.

However, I wound up spending closer to 2 hours for the whole experience given the extended hiking I had to do as a result of the seasonal closure of the Green Valley Campground.

Green Valley Falls sat in the Cuyamaca Rancho State Park near Julian in San Diego County, California. It is administered by the California Department of Parks and Recreation. For information or inquiries about the park as well as current conditions, visit their website or Facebook page.

Driving from Julian to the Green Valley Campground

From the main drag in Julian, we drove to the east end of town, then left the Hwy 78 to turn right onto Hwy 79.

We then followed this road south for about 16 miles to the signed turnoff for the Green Valley Campground on our right.

Since the campground closed seasonally between October and May, we had to drive another 0.6 miles to the East Mesa Trailhead pullout, which was on the left side of the road.

Note that 0.6 miles in the opposite direction from the campground entrance was the Sweetwater Trailhead or Harvey Moore Trailhead.

This trailhead could also work as a starting point to hike to the Green Valley Campground when it’s closed.

In any case, this drive took us about 30 minutes.

Driving from San Diego to the Green Valley Campground

Had we been coming up from Old Town San Diego, we would head east on the I-8 for about 37 miles to the Japatul Valley Road or Hwy 79 (exit 40).

Then, we’d take Hwy 79 north for a little over 7 miles to the Green Valley Campground entrance on the left.

Finally, we could follow the campground road for the next half-mile or less to the Falls Picnic Area.

According to GoogleMaps, this drive was on the order of 45 miles, and it would take about an hour. 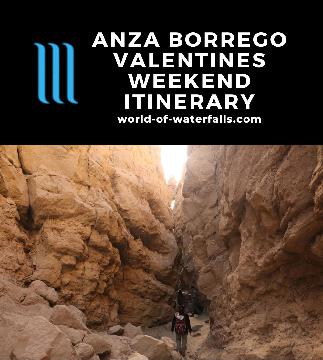