Heart Rock Falls (more formally known as Seeley Creek Falls) was known not so much for its tiny 25-30ft waterfall but its nearly perfect heart-shaped depression right next to it.

It was one of those features that made us marvel at it because of how such a seemingly man-made shape could exist amidst the chaos and randomness of Mother Nature.

For that, this was definitely one of the more unique waterfall experiences we’ve had, and we even felt it was memorable enough for us to include it at one point on our Top 10 So Cal Waterfalls List!

I suspected that this heart-shaped depression might have been the result of a pair of whirlpools or vortices that forcefully drilled into the bedrock when fast-moving or turbulent water might have rushed through at some point in its history.

The first couple of times we’ve visited this waterfall back in late March 2005 and and Easter Sunday 2010, there seemed to be a lack of signage, which made us think this was really more of a locals’ waterfall or known to those who stay at the nearby (private) Camp Seeley.

This was further corroborated by the observation that there weren’t many people around (at least certainly nowhere near the numbers seen at the more known waterfalls in the Southland like Eaton Canyon Falls).

Even on a more recent visit in May 2017, we showed up to this waterfall right at high noon on a Saturday, and although there were dozens of people, it still didn’t feel like there was a big crush.

Heck, we even noticed some signage pointing the way to the trailhead parking, which was probably indicative of how this place was probably no longer a locals only spot.

Getting to the falls will probably require a bit of driving (since I’d imagine most visitors to this website don’t live in or near Crestline or other mountain communities in the San Bernardino Mountains).

We probably spent a little more time driving than the actual time on the trail itself, which we’ll get into in the directions below.

As for the hike, we used to start near a sewage pipe cover on an open lot across the creek from Camp Seeley.

But on our most recent visit, we started from the official trailhead (where the road dead-ended at a gate).

A spur trail descended from the parking area and rejoined the main trail right by the swimming pool, which we suspected might have shaved off 0.3-0.4 miles in each direction.

As we meandered about on the main trail, we noticed that tall pine trees towered over us. We also noticed that we were following Seeley Creek downstream (yep, it’s an upside down hike though the elevation loss was hardly noticeable).

In addition, there were a few stretches where thick sewer lines were also following both the trail and Seeley Creek.

We suspected that the sewage was being carried from the nearby Camp Seeley as well as the rest of the community of the Valley of Enchantment.

From the official trailhead, the distance we traveled was roughly 0.6-mile each way (1.2 miles round trip) to the Heart Rock Falls.

On our first trip to the falls, we thought it was pretty easy to miss the spur “trail” or scramble to the rocky ledge overlooking both the heart-shaped depression and the Seeley Creek Falls (especially if no one else was around to provide a hint as to where to go).

The only other hint that there was something down there was by the loudness of the rushing waters of Seeley Creek itself.

Julie and my Mom once accidentally missed the spur trail and kept going before the trail ended up joining with some road (and missed the falls altogether until they backtracked).

At the overlook ledge itself, we definitely had to exercise caution because of how narrow the ledge was and high up the dropoffs were.

We could easily envision how someone could take a real nasty (perhaps fatal) spill into the little basin right at the plunge pool of the falls down below us.

It was for this reason that you might notice in some of the photos on this page were composed in such a way that the falls tended to hug the cliff on the right.

We simply didn’t want to risk going further out towards the drop-offs for a cleaner shot (though theoretically, I suppose it would be possible if you’ve got more of a death wish).

In addition to the ledge view, there was a fairly easy path that continued from the ledge area towards the plunge pool at the base of the Heart Rock Falls itself.

Somehow we didn’t notice this option the first time, but the last couple of times we were here, we were glad to have finally found it as it afforded us the ability to interact with the water.

It also provided us with a different perspective of the falls as it was nestled between the polished granite rock cliffs with a clear pool fronting it accompanied with the sounds of moving water providing that soothing background white noise appropriate for the scene.

We couldn’t see the heart-shaped depression from here, but it was definitely a more relaxing spot (as opposed to the narrow ledge above) to enjoy the falls before making the return to the car.

Finally, we did see some people scramble right up to the heart-shaped depression, but it was definitely with some risk involved.

After all, the granite had been worn smooth so the risk of a slip and fall would be much greater when wet given the pitch of the slopes involved.

I made an attempt to do this, but I didn’t find the correct route to get there.

That said, you’ll see in some of the photos further below on this page, there were quite a few other people more familiar with this area who did figure it out.

Heart Rock Falls resides in the San Bernardino National Forest. For information or inquiries about the area as well as current conditions, visit their website or Facebook page.

To get to the trailhead from the I-605/I-210 junction near Monrovia or Duarte (about 25 miles northeast of downtown Los Angeles), drive east on the 210 Freeway (well east of the I-15) getting off at North Waterman Ave (Hwy 18), which was about 3/4-mile east of the junction between the 215 and 210 Freeways. Once on Hwy 18, head north towards Crestline as Hwy 18 headed into the mountains (note: the relatively fast speed limit and four-lane highway despite the curviness of the road is due to the fact that this is a thoroughfare for Crestline, Lake Arrowhead, Big Bear Lake, and other mountain communities). As the road climbs up to over 3000ft or 4000ft, pay attention to the junction of Hwy 18 and 138 just past an overhead bridge (it can get confusing here so take your time and keep right on the slow lane).

Take the exit on the right for Hwy 138 (the thoroughfare continues on as Hwy 18 if you miss this exit), and continue driving north on Hwy 138 for roughly 2.5 miles (you’ll be going through the western outskirts of Crestline as well as through the community of the Valley of Enchantment). Just north of the town, there’ll be a well-signed entrance on the left for Camp Seeley. Take this entrance, and just before the private car park for Camp Seeley, veer left onto a narrow road going past a concrete ford over Seeley Creek.

Once you’re past the ford, keep an eye out on your right for an open area near a sewage pipeline cover as well as a trail starting beneath some small power lines. Note that you’re now across the creek from Camp Seeley from here. We used to start out hike at this open space, but we’ve since figured out that we could continue driving the single-lane paved road all the way to a gate blocking further progress. In front of this gate was the nearest trailhead parking for the Heart Rock Falls.

Overall, it took us about 75-90 minutes to make this drive without traffic, but this could easily take around 2 hours with traffic.

Alternatively, the first time Julie and I went here in 2005, we took the I-15 north (from Ontario) exiting at the Hwy 138 and turned right (in the direction of Silverwood Lake; note that turning left here would lead you to Mountain High Ski Resort). Then, we followed the 138 all the way to the Camp Seeley entrance which would now be on the right just before entering the town of Valley of Enchantment. 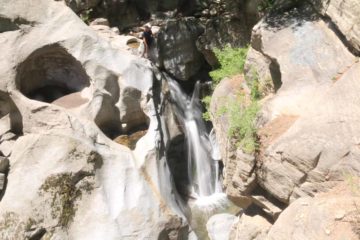 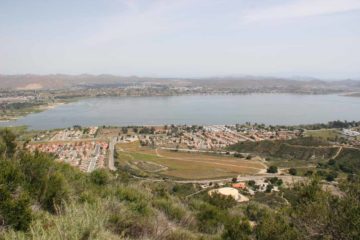 Heart Rock Falls – Great Waterfall – Alt. shorter trail June 13, 2011 9:59 pm by hsbn - This waterfall is small. It's not even worth visiting if it's not for the perfect heart shape depression. The direction is pretty clear however you can drive on the paved road until its very end. There is more parking space and it saves you about 1/4-mile if you are lazy to hike. Park where you… ...Read More

I Love This Place – Heart Rock Falls May 28, 2010 1:30 am by D - I lived in VOE for 10 years and I hiked to Heart Rock every chance I got. It's a great place to catch up with yourself and my son loved it as well. I would love to live there again and enjoy Heart Rock Falls. ...Read More 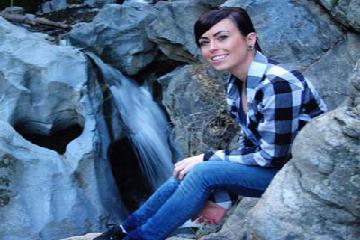 Heart Rock Falls March 23, 2010 7:29 pm by Amy - I absolutely loved the scenery of this whole hike and destination. It was very confusing to get there and we had to make a few U-Turns, but it was definitely worth the frustration of driving there. The hike was a short one, not more than a mile and a half long, and not strenuous in… ...Read More
The Legend Behind the Heart (Heart Rock Falls) December 8, 2009 1:41 pm by Kelly Moedl - Growing up in Valley of Enchantment, one of the legends you must know about is actually how the heart came to be. It has been said that an Indian princess was told by her father that she could not be with the man she loved because he was not of her tribe. Her tears melted… ...Read More