Jack Creek Falls was a bouldery waterfall that appeared to require some precise timing in order to see it perform.

In our case, we thought that a series of saturation storms in the span of a little over a half-week signaling what appeared to be the start of the long-awaited El Nino rains would revive the falls.

But as you can see from the photo above, even those storms couldn’t undo four years of drought.

In fact, the bouldery underbelly of the path of Jack Creek was probably one of the biggest reasons why serious timing was required in the first place.

After all, any bit of water that would flow would find gaps beneath the boulders thereby making the waterfall mostly hidden from sight (or at least hidden from the camera lens).

When I managed to get up to the base of the waterfall, I did see that there was a little bit of a trickle in the stream.

However, the only way this falls would be photogenic would be during a heavy rain storm where a flash flood or a swollen stream would have enough volume to flow over the boulders instead of underneath beneath them.

While the lackluster performance of Jack Creek Falls might make one wonder why we went this far from Los Angeles to see it, we actually visited Legoland the day before.

It turned out that this was one of the closest and accessible waterfalls that we knew of to the city of Carlsbad so that was the primary reason why we made the detour to come here.

In any case, the accessibility of this waterfall also meant that our daughter was able to make the short 1/4-mile hike (maybe 1/2-mile round trip) though she too was not impressed by the lack of water.

The Hike to Jack Creek Falls

The “hike” started from the nearest parking lot and picnic area to the entrance kiosk for the Dixon Lake Recreation Area (see directions below).

From there, we followed the paved road past a couple of signs towards the “Primitive Area”.

That was where we then saw a not-so-obvious path to the so-called “Grand Loop Trail”, which was said to be 2.4 miles total.

Fortunately, the signage was close enough to the road to orient us.

It turned out that Jack Creek Falls wouldn’t require doing the entire hike, but the scenery would probably be enough to make the whole hike worthwhile.

So after following the somewhat faint trail, it then went right across another paved road before going across a handful of sloped and stepped paths.

This led us downhill towards a lawn and picnic area, where we then finally made our descent towards the very end just beyond that picnic area.

That was when we then took the steps down to a more conventional trail that skirted a ravine overlooking what turned out to be Jack Creek.

A short distance after passing a numerically-signed jumble of giant rocks, we then got our first glimpse of the bouldery stream where Jack Creek Falls was supposed to be.

In order to get closer to the Jack Creek Falls (which didn’t look suitable for toddlers so Julie and Tahia turned back), I continued further along the trail.

I was able to see the man-made Dixon Lake in the distance along this trail.

As the trail made its short descent, I encountered a junction where I took the left fork that led me down to a bridge.

On the far side of the bridge, I then left the obvious trail and took a different trail following along Jack Creek.

When I got between the signposts 8 and 9, I then scrambled my way through prickly vegetation, fallen boulders, and stagnant pools before I finally reached the base of Jack Creek Falls.

After having my fill of the barely trickling waterfall, I then returned the way I came back to the footbridge.

Then, I backtracked to the signposted jumble of giant rocks.

Again, I could have continued doing the loop hike, which would have brought me closer to the shores of Dixon Lake (where I saw some people fishing), but I opted not to prolong the excursion.

Once I got past the giant rocks, I then went back uphill on the trail, except this time, I decided to continue climbing up the hill as it looked like there was an open area up there.

And when I did get up to the top of the short slope, I found myself in a field adjacent to the picnic area and car park.

So in hindsight, I put the word “hike” in quotes because you can argue that this wasn’t really much of a hike (except for the stream scrambling to get close to Jack Creek Falls).

Even though we wound up spending about 45 minutes away from the car, it could have taken far less time to experience the falls, which was why I downgraded the difficulty of this waterfall.

Jack Creek Falls resides in the Dixon Lake Recreation Area in Escondido in San Diego County, California. It is administered by the City of Escondido. For information or inquiries about the area as well as current conditions, visit their website.

Since we spent the night at Carlsbad (so we were able to enjoy Legoland with our daughter), we’ll describe the directions from there.

Heading north on the I-5 from Cannon Road, we then headed east on Hwy 78 towards Escondido.

After about 3 miles or so on the I-15 north, we then took the El Norte Parkway exit.

Then, we turned right to go onto El Norte Parkway and took that street through several lights for about 3.2 miles to La Honda Drive.

We were then supposed to turn left to get onto La Honda Drive.

Note that La Honda Drive didn’t have a traffic light so it was easy to miss.

The next light was Lincoln Drive, where we were able to make a U-turn then leave El Norte Parkway to get onto La Honda Drive due north.

We followed La Honda Drive for the last 1.3 miles or so, which eventually climbed its way towards a turnoff for the Dixon Lake Recreation Area on the right.

To get past the kiosk, we had to pay a $5 per vehicle fee.

The parking lot was just down the hill from the kiosk to the right of the next junction within the park.

Overall, this drive took us about 35 minutes.

Finally, we should note that we did notice a lot of cars parked just outside the Dixon Lake Recreation Area entrance.

Apparently, that parking area was for the Daley Ranch, but I’d imagine it was as crowded as it was either to avoid paying the $5 fee to get into Dixon Lake Recreation Area, or the Daley Ranch hiking trails were that much more popular than that of Dixon Lake.

For some geographical context, Carlsbad was 87 miles (90 minutes drive more or less depending on traffic) southeast of Los Angeles and 35 miles (over a half-hour drive) north of San Diego.

360 degree sweep from the base of the trickling waterfall 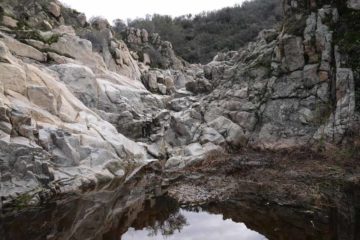 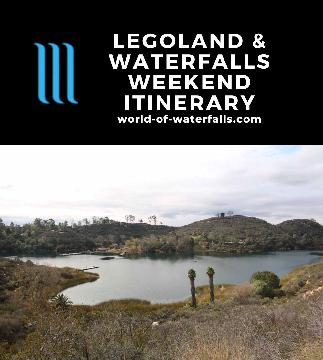