From what we were able to tell, seeing the falls flowing required quite a bit of timing as we could envision its flow easily become nothing by late Spring or early Summer.

Ultimately, it depends on how much Winter rain has fallen in Southern California).

Nonetheless, when it does flow (as it did for us), the falls are pretty impressive since it tumbles with a cumulative drop of a reported 150ft in desert-like terrain (thereby making this falls a bit of an oasis).

Now despite the fact that the falls sat quite close to the Interstate 8, we definitely had to work to get a view of the falls as it wasn’t easy.

First, we had to hike for about 2 miles along the Pacific Crest Trail before leaving the trail at an easy-to-miss spur.

On the initial two-mile stretch, we passed underneath the loud I-8 before the trail climbed alongside fences (some of which had holes cut into them).

It seemed like those fences were meant to be deterrents for people illegally crossing the border (as further evidenced by Border Patrol vehicles routinely surveying the road where we parked the car).

Anyways, as we went further on the trail, the sound of the freeway slowly faded (thankfully) and we could start to hear sounds a little more indicative of Nature (e.g. foliage rustling with the winds or the faint hissing of a stream).

Once we took an easy-to-miss unsigned spur trail leaving the PCT, it didn’t take long before this trail degenerated into a cross-country scramble.

It was here where we had doubts as to whether we’d find the waterfall since scrambling without an obvious trail can be pretty dodgy, especially considering the presence of rattlesnakes in a desert like this.

In addition to the possibly lethal wildlife, we didn’t have fun frequently brushing against hard, prickly desert vegetation during the scramble either.

As our doubts piled up while making this scramble, this excursion definitely felt more like an adventure where a successful outcome wasn’t guaranteed.

Anyways, when we started to hear the sound of the waterfall, which was clearly flowing well enough to be heard, we used that sound to lead us closer to its stream.

However, we then eventually found ourselves at the top of the Kitchen Creek Falls, where we couldn’t see much of the waterfall.

So we actively looked for a way down to get a better view of this elusive waterfall.

That was when we found a very steep scramble down a dry gully.

It seemed a bit dicey as we encountered plenty of loose rocks that we managed to pry loose on the descent.

The whole time we did this scramble, the terrain’s steepness made us cognizant of how hard the return hike back up would be.

Once we got to the bottom of this descent, we had to cross Kitchen Creek before doing some additional rough scrambling until we finally got a satisfying view of Kitchen Creek Falls.

When we had our fill of this waterfall, we still had the non-trivial task of climbing back up the gully and then do some route-finding to regain the Pacific Crest Trail.

While this hike had its share of difficulty with route-finding and steep scrambles, we also had to deal with a freak snow storm that overtook us and nearly whited out the desert!

Indeed, we definitely had to earn our sighting of Kitchen Creek Falls, and I hope to get another shot at this under the right conditions.

Kitchen Creek Falls resides in the Cleveland National Forest near Descanso in San Diego County, California. It is administered by the USDA Forest Service. For information or inquiries about the area as well as current conditions, visit their website or Facebook page.

Drive east on Interstate 8 from San Diego for roughly 50 miles to the Buckman Springs Road exit.

Taking this exit, there’s an intersection with a road paralleling the I-8 as you go east.

calls this the “Frontage Road,” but from what we could tell, there was no sign indicating this road being named as such (though I think maps label this road as the Old Hwy 80).

In any case, you’ll want to stay on this “Frontage Road” (avoid staying on Buckman Springs Road), taking it east for over two miles towards a huge pullout at what was once the Boulder Oaks store (no longer there as of our last visit in 2008).

Park at this pullout to start the hike (it’s signposted for the Pacific Crest Trail), which leads under an overpass of the I-8.

If you manage see a signed campground and turnoff beyond this pullout, you went too far.

Since we were somewhat close to the Mexican border, we encountered marauding Border Patrol vehicles on that frontage road going back and forth.

They were probably scrutinizing us to see if we crossed illegally, I’m sure. 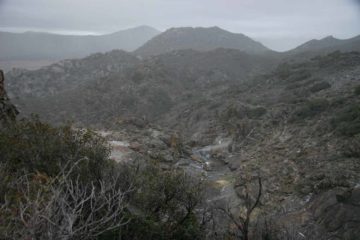 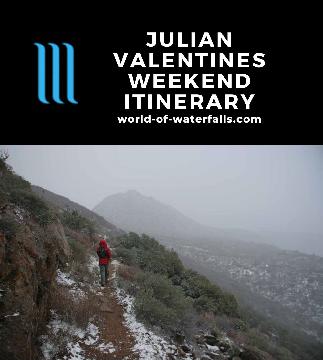 If you have a waterfall story or write-up that you'd like to share, feel free to click the button below and fill out the form...
Some additional info on Kitchen Creek Falls from a local March 20, 2017 10:10 am by Kevin Keane - Since I live in the area, I have a bit of additional information. First of all, the road where you park is *a* frontage road (meaning, a road that parallels the freeway), but the actual name is Old Highway 80. It's called "old" because I-8 was built to replace it. The former Highway 80 lost… ...Read More