McWay Falls was easily one of the most beautifully situated waterfalls on the California Coast that we’ve personally encountered.

The waterfall was where McWay Creek was said to drop some 80ft into a beach situated within the picturesque McWay Cove (also called Waterfall Cove), which opened out to the Pacific Ocean.

We’ve even confirmed that McWay Creek was year-round as we’ve been here in different seasons from Spring through Autumn.

Its impossibly scenic location (as you can see in the photo above) was what made this waterfall unique and a place we never get tired of seeing no matter how many times we’ve been here.

I swear that every time we’ve visited the Big Sur Coast, we’ve made at least one stop to McWay Falls so I’d imagine we had to have been here at least six times or more over the years.

The waterfall is said to drop some 80ft into a beach situated within a picturesque cove (McWay Cove; also called Waterfall Cove) opening out to the Pacific Ocean.

In addition to the picturesque (but inaccessible) cove, on a recent visit in 2018, we noticed for the first time that there was actually a sea arch almost behind the waterfall itself!

And while the scene is beautiful at almost any time of day, we were treated to a really special sight when we showed up right at sunset.

That was when the warm glow of the setting sun painted both the falls and the neighboring cove a warm yellow and orange.

Indeed, we quickly understood why Big Sur had a reputation for being the best place to witness where the ocean meets the sky.

It’s no wonder why we never get tired of this place despite the increase in the number of visitors here, especially with the blow up on social media.

Come to think of it, this waterfall and its location really embodied the rugged beauty that epitomized Big Sur.

One of the more unique aspects about McWay Falls was that it more-or-less fell directly into the ocean.

In fact, we’ve seen in the literature that the term tide fall to categorize such ocean-bound waterfalls was coined thanks to this waterfall.

That said, signs here showed how the falls looked both before and after a major landslide in 1983.

Prior to that major event, the falls did indeed fall directly into the ocean.

Now, it mostly falls on a beach resulting from the landslide, and I’d imagine only under high tide would the falls once again touch the ocean directly.

By the way, that major landslide (which closed Hwy 1 for nearly a year and was said to be visible from space) illustrated the inherent instability of the cliffs here.

Other landslides have occurred that closed Hwy 1 for another couple of years prior to our latest visit in 2018.

Anyways, such landslides are why the authorities urge people not to try to scramble down the cliffs to access the beach at McWay Cove.

We then descended a path that began near the entrance kiosk, which took us on a well-defined trail leading towards the ocean.

After a few steps towards the ocean, we noticed a short spur path to the left leading to the signposted Pelton Wheel.

The wheel was basically a small hydroelectric faciilty currently housing a small turbine.

However, the wheel once featured cups at the ends of each spoke in a waterwheel to maximize the force of the year-round McWay Creek falling onto it.

The electricity generated by the reliable McWay Creek fed the Saddle Rock Ranch that Christopher McWay homesteaded nearby in the late 19th century.

While the original wheel was on display like a museum exhibit artifact, the more modernized turbine looked to still be in use given the presence of transformers and wirings behind a small room with a window to peer into.

Back on the main trail, we then followed it through a circular corrugated tin tunnel beneath Hwy 1 before emerging through the other end as the dramatic scenery of the Pacific Ocean fronted by steep cliffs opened before us.

At that point, we kept right and walked along the cliff-hugging trail (with rails to minimize dropoff exposure) as it provided views of Waterfall Cove and McWay Falls along the way.

The trail continued towards the ruins of the Waterfall House, which now was nothing more than terraced foundations surrounded by trees.

There were some interpretive signs discussing the history of the area including the major landslide in 1983.

I swore that when we first visited this place back in 2001, the Waterfall House was very overgrown with trees.

However, on a more recent visit in 2015, the area seemed more cleared of foliage so we were able to get dramatic coastal views to the north as well as different views of McWay Falls to the south.

It seemed like McWay Falls and the dramatic coastal scenery was best seen in the afternoon when the setting sun would paint the surrounding cliffs and trees a warm yellowish-orange light while bringing out the blue colors of the water.

In the morning, the area would mostly be in shadow and somewhat against the sun, but then it’d be very quiet here.

All in all, the walk from the main parking area to the Waterfall House and back was about a half-mile round trip.

That said, we noticed that there was also trail access from Hwy 1 to the McWay Falls and Waterfall House ruins as well (though it was fenced off on a visit in 2018 likely due to erosion concerns).

Apparently, if you’re lucky enough to find parking along Hwy 1 and this shortcut path is open, then you can avoid paying the state park fee.

But in our experiences here, it’s often not worth the trouble to compete for spots along the busy Hwy 1 just to save a few bucks in cash.

Finally, if you’re up for some more exploring of the Julia Pfeiffer Burns State Park, you can visit Canyon Falls whose trail begins on the opposite side of the official day use parking lot.

McWay Falls resides in Julia Pfeiffer Burns State Park in Big Sur in Monterey County, California. It is administered by the California Department of Parks and Recreation. For more information, questions, and current conditions, you can check out their website.

McWay Falls is situated in Julia Pfeiffer Burns State Park, which was along Hwy 1 about 42 miles (roughly 90 minutes drive) south of Monterey and 94 miles (about 2 hours drive) north of San Luis Obispo.

The well-signed entrance to the park is off the Hwy 1 in the heart of the Big Sur Coast (about 7 miles south of Deetjen’s and 13 miles north of Lucia Lodge).

Then, there’s a trail on the opposite side of Hwy 1, which ultimately joins the main walkway right at the end of the tin tunnel.

Whether or not you decide to do the falls this way, keep in mind that the pullouts on Hwy 1 are near a blind turn (as you’re heading north).

We nearly hit a guy who pulled out right in front of us as we turned that corner heading north.

So northbound drivers really need to be cognizant of the hazard here, especially regarding those who are getting back on the road from those pullouts as well as walkers crossing the highway!

For context, Julia Pfeiffer Burns State Park was about 282 miles (about 6 hours drive) northwest of Los Angeles and 112 miles (under 3 hours drive) south of San Jose.


Left to right sweep of McWay Cove on a beautiful day 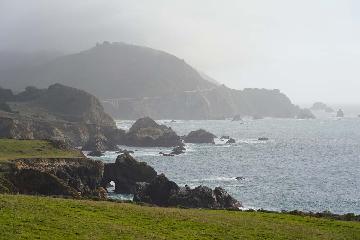 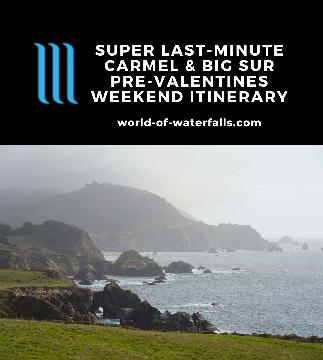 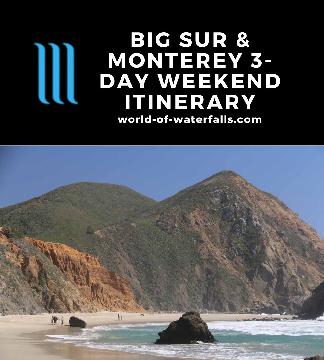 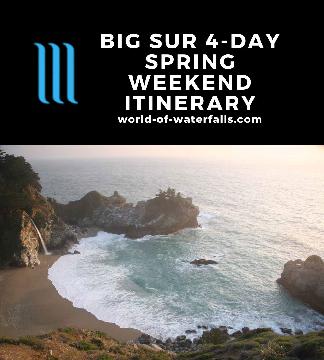 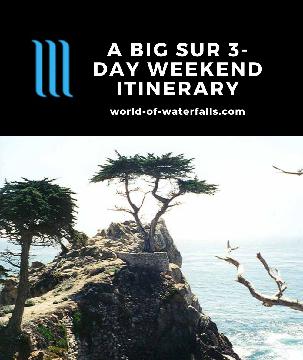 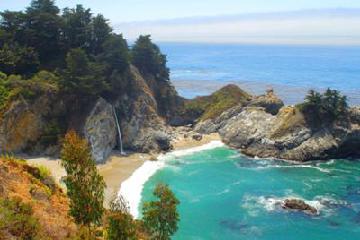 Big Sur Visit Last Summer March 22, 2010 8:07 pm by Ron Andrews - I agree that the California coast is a unique place in the world. I spent a couple days in the Big Sur area last summer. ...Read More