Middle Fork Tule River Falls is a short but sweet waterfall that we happened to notice while we were driving the twisty Hwy 190 between Springville and Ponderosa.

This waterfall (said to be 50ft though we think it might be shorter than that) resided in a part of the Sequoia National Forest that belonged to the Tule River District.

According to the literature, there are many waterfalls on the Tule River, but for one reason or another, most of them are not safely accessible.

However, this waterfall was the exception to that statement although it wasn’t necessarily an easy thing to do to get close to it.

First, we had to identify the right pullout as there was no signpost indicating where to get started (see directions below).

Next, we had to descend on a fairly steep and primitive scramble where there was an easy-to-miss turnoff that ultimately led to a profile look at the Middle Fork Tule River Falls.

Continuing on the wrong path would’ve led to some unremarkable upper cascades.

I suspect that some young folks who think they’re indestructible might actually stream scramble downstream from here to the top of the falls.

Anyways, we were content with the view of the falls from the apparent end of the 1/4-mile (each way) scramble.

It was desirable to continue to see if there was a more frontal look at the falls from up this close.

However, from what we were able to tell, the scrambling became steeper and more dangerous so we didn’t push the issue any further.

Indeed, the only decent frontal view that we managed to get was right from the Hwy 190 road though there was no formal pullout for it.

Middle Fork Tule River Falls is in the Tule River District of Sequoia National Forest near Porterville in Tulare County, California. It is administered by the USDA Forest Service. For information or inquiries about this area as well as current conditions, visit their website or Facebook page.

Middle Fork Tule River Falls can be found on Highway 190 between Springville and Ponderosa.

You can see this waterfall from the road (there are no pullouts for this view however), but you get a closer and more satisfying view from a scramble on one of the unsigned pullouts about 1.7 miles east of the Camp Wishon turnoff (Road 208).

Springville is under a half-hour drive east of Porterville.

Sweep of the main falls. Please excuse the poor quality as this video is ancient. 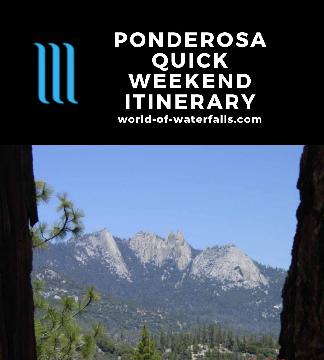 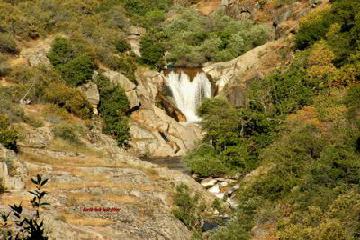 Tule river water fall September 8, 2014 12:52 am by Mike Hunt - I was going there with my friends in the early 70's when I was in high school. My brothers in the 60's. There was no trail, no trash, no other people and no writing on the rocks! You could park where ever you wanted on hwy 190. No cops. All there was, was respect for… ...Read More

Hiking with kids…… (@ Middle Fork Tule River Falls) September 18, 2011 5:10 am by Love2hike - This hike is worth it!! Although this hike is only about 30 min. The rocks are really slick and slippery. After climbing down off the trail onto the rocks you have to take off your shoes otherwise you have absolutely no traction. Even though we hiked down with our 5 and 7 year old kids… ...Read More