Murray Canyon Falls (also referred to as the Seven Sisters Falls or the Seven Falls) was a series of waterfalls and minor cascades within Murray Canyon.

Of these waterfalls, the uppermost pair that we encountered were the most impressive.

The penultimate waterfall was a split waterfall of about 15-20ft high.

The main one that we saw (as shown above) was a pair of falls each at about 10-15ft plunging one after the other.

Although we avoided the desert heat by doing this hike in the Winter time, we could totally see the appeal of this place when the temperatures would rise.

Experiencing Murray Canyon Falls and the hike to get there

Julie and I went on a bit of an adventure to access the Murray Canyon Falls.

Indeed, this adventure took quite a bit of effort to reach, especially when you compare the much easier Palm Springs Waterfall experience in the nearby Tahquitz Falls.

This adventure included ruining our hiking boots as we had no choice but to wade right through the dozen or more crossings of Murray Creek.

Each of these creek crossings were at least ankle to shin deep when we did this hike in mid-February 2017, which was a year of unusually high rainfall in the Southland.

Yet with all the inconveniences, Julie and I found Murray Canyon to be a very scenic hike.

We passed through desolate high desert terrain right at the foot of the San Jacinto Mountains.

Overall, it took us about 2 hours to get from the trailhead to the end of the official trail at Murray Canyon Falls.

By the time we returned to the trailhead, we wound up spending about 3.5 hours away from the car.

Given the conditions of our hike, in hindsight, we should have brought our trekking poles as well as water sandals.

This was not the kind of excursion to let water into Gore-tex boots where the water had nowhere to escape except when I’d lift my leg to let the water out through the top.

So the water weighing down our shoes probably caused us to move even slower than our already slow pace.

Either way, the entire hike was said to be about 4 miles round trip.

We were told that there were about a dozen stream crossings, but I swore that we might have counted a few more than that.

Finally, Murray Canyon Falls was said to be a seasonal waterfall.

Therefore, the best time to visit would be when snow from the San Jacinto Mountains would melt and drain into Murray Canyon.

In other words, mid-Winter through Spring would be the seasons to visit though the longevity of the creek would depend on how much precipitation would have accumulated in the mountains.

Obviously during a drought (like in the past few years prior to 2016 and 2017), the window of opportunity to visit the falls when it would be flowing would be even more diminished or non-existent altogether.

The trail then proceeded to gently descend from Andreas Canyon into a seemingly desolate flat desert area where the majority of the vegetation didn’t seem to grow any higher than one’s waist.

Such sparse and low-lying vegetation made it seem like this would be the last place to find a waterfall.

However, this was merely an interlude to get to the Murray Canyon itself.

This flat stretch, which lasted about a half-mile, was open enough that we noticed some interesting rock formations sticking out amongst the low-lying shrubs.

Meanwhile, we were also able to look to our right at the San Jacinto Mountains rising majestically above the basin.

The Murray Canyon Falls Trail descended towards the first crossing of the creek, which had a lot of water when we did this hike.

We had overheard locals say they had never gotten their shoes wet on this hike before, which underscored the rather unusual circumstances that we found ourselves in.

In any case, immediately after the creek crossing, the trail reached a fork near some kind of solar-powered vane.

We kept right at the fork to follow Murray Creek and the row of palm trees where we now could see the San Jacinto Mountains straight ahead of us.

In the mean time, we could also see some more impressive rock formations back across Murray Creek to our right.

Shortly after a brief spell of dry hiking, we then reached the second creek crossing of Murray Creek.

This particular crossing was definitely deep enough to get our hiking boots wet over the top.

After this crossing, the creek crossings would persist pretty frequently for the remainder of our time within Murray Canyon so we had to get used to walking with ruined hiking boots.

Continuing in this manner for the next 1.5 miles, the path would momentarily split and rejoin as there were horse paths leading to deeper but flatter and less-rockier creek crossings.

There was also another trail junction where horse tours would deviate from Murray Canyon for good.

Roughly the first mile or so would be shared with horse traffic from time to time.

As the canyon walls would continue closing in, the creek crossings became even more frequent and trickier.

Meanwhile, we’d frequently encounter minor cascades amongst Murray Creek (typically on the order of around 5-10ft or less).

Even when we resigned ourselves to getting wet at each creek crossing, we still had to choose our steps wisely amongst the submerged rocks so as to not get in too deep in Murray Creek, especially where there was a current.

Eventually, we’d reach a point where the trail then climbed fairly steeply along the canyon walls while skirting around the first major waterfall in Murray Creek.

Prior to the climb, there was an informal detour past a creek crossing to get to the base of this waterfall.

The falls appeared to be split by a giant rock into a thin multi-tiered cascade on the left side and a 10-15ft plunge on the right side.

Of all the dozens upon dozens of hikers partaking in this popular excursion, not many of them made this detour to the base of this first falls.

That said, the first falls was not the main waterfall so we definitely didn’t stop and turn around here.

Indeed, the next falls was even more impressive than this one.

So as we resumed the hike and climbed above the first falls, we managed to get partial glimpses of that first waterfall down below.

Given the overgrowth in the ravine below, the trailside views of the first falls left a lot to be desired.

After the last of the creek crossings, the trail then rounded a bend before finally terminating at the main Murray Canyon Falls.

Murray Canyon Falls was a two-tiered waterfall where the first falls had a wide block-type appearance while the upper one had a bit of a plunge.

To get up to that upper waterfall, we saw about a dozen or so folks make the dicey-looking scramble up a steep sandstone slope to get past the lower plunge of the falls.

Julie and I weren’t comfortable taking that risk so we opted to stay before the lower waterfall and bask in our accomplishment as well as the ambience of the place.

After having our fill of the Murray Canyon Falls, we then made the uncomfortable hike back to the trailhead, where our feet were very pruny when we finally got back to the car.

Murray Canyon Falls is on private property in Palm Springs of Riverside County, California. It is administered by the Agua Caliente Band of Cahuilla Indians Reservation. For information or inquiries about the general area as well as current conditions, you may want to try visiting their website.

We then kept right at the fork in the road to remain on South Palm Canyon Drive and drove for the next 2.7 miles to the Indian Canyons kiosk.

Shortly after the kiosk, we then followed the signs for Murray Canyon, which was the first right at the next junction.

We then drove about 0.8 miles to the Andreas Canyon Pride Rock Picnic Area and Parking Area.

However, we then continued driving past a bridge and onto an unpaved road leading to the Murray Canyon Trailhead in another 1/4-mile or so.

Overall, this drive took us about 40 minutes, but half of that time was spent waiting in line to get past the Indian Canyons kiosk.

For context, Palm Springs was roughly 2 hours drive east of downtown Los Angeles pretty much along the I-10 Freeway before heading south on the Hwy 111 just past Cabazon and the Morongo Casino. 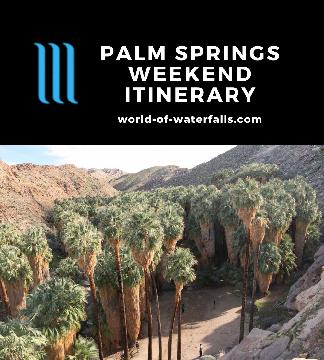