Nojoqui Falls (pronounced “no-HO-wee” which was said to be a Chumash word) is an impressive 80ft moss and fern fringed waterfall that seem to be somewhat common in the Southern California area.

What’s cool about this waterfall is that it seems to grow the rock cliff over where it flows.

Therefore, the bedrock supporting the falls is actually protruding from the rest of the cliff.

According to the signs here, it’s said that this is a consequence of the water from the Nojoqui Falls depositing minerals in much the same way stalactites grow.

That’s because water picked up minerals (mostly calcium carbonate or limestone) as it dripped through the caves, which in turn left deposits to build up on the underlying surface or wall over time.

Julie and I enjoyed the short 10-minute (about 0.6 miles round trip) walk as it meandered through a very lush and peaceful canyon.

The terrain was gentle so it really felt more like a stroll.

Considering that we visited Nojoqui Falls shortly after a clearing rain storm, we also enjoyed seeing water droplets hanging from the foliage all around us.

Furthermore, we breathed in the crisp, cool air, which further added to the pleasant experience.

Now given that the falls was attractive, well signposted, had a short and pleasant walk, and was quite close to the Danish-influenced town of Solvang, we could totally see why this would be a very popular attraction.

We just so happened to show up on a day when most people were at work and there were still a handful of people here.

So imagine just how much busier it would get on the weekends!

Even though we managed to see the waterfall in satisfying flow, I have read that it is seasonal.

Therefore, I’d imagine that this waterfall is best seen during the Winter and early Spring months during a year with average or above average Winter precipitation in the Southland.

Nojoqui Falls resides in the Nojoqui Falls Park near Solvang in Santa Barbara County, California. It is administered by the Santa barbara County Parks division. For information or inquiries about the area as well as current conditions, visit their website.

Nojoqui Falls Park can be accessed from the US101 Freeway between Gaviota State Beach and Buellton.

Look for the signed turnoff for Nojoqui Park roughly 6 miles north on the 101 from the turnoff for Gaviota Beach Road (which leads to Gaviota State Park). This turnoff was downhill from the Nojoqui Summit.

This turnoff takes you onto Old Coast Hwy on the right, which you then take for about a mile before turning left onto Alisa Road.

Take Alisal Road for another 0.8-mile before turning right onto the signed turnoff for Nojoqui Falls Park.

Note that if you’re coming from Santa Barbara, you would have to drive about 40 miles to get here.

Another thing worth noting is that there is also an unsigned turnoff onto the other side of the Old Coast Highway right at the Nojoqui Summit, which would also take you to the Alisal Road (albeit on a more narrow and winding road).

Coming from the other direction starting in Buellton, drive south for a bout 4.8 miles on the US101 before turning left onto Old Coast Highway.

Drive another 0.8-mile on Alisal Road before reaching the Nojoqui Falls Park.

By the way, as alluded to earlier, Nojoqui Falls is only a few miles south of Lompoc and the charming Danish town of Solvang so there’s really no excuse not to check out the falls while you’re in the area!

From a geographical context, Santa Barbara was 100 miles (over 2 hours drive with moderate traffic) from downtown Los Angeles. Without traffic, this drive could easily be accomplished in about 90 minutes.

Sweep from bottom to top of the waterfall. Notice the texture of the protruding rock and the surrounding ferns and moss. 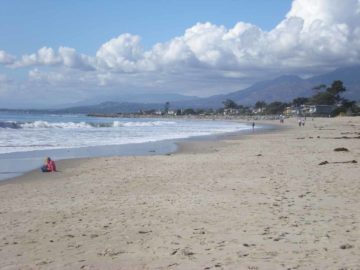 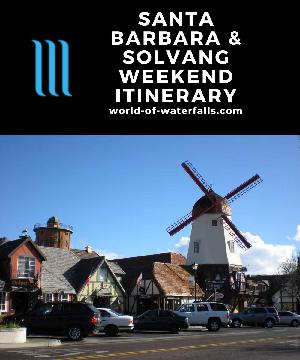 Quite a Hike! (Nojoqui Falls) August 18, 2011 11:40 pm by James Mourgos - We arrived at the park that is near these falls and were told that there is a ten minute walk. But it's a ten minute walk FROM the ENTRANCE. Actually one could drive up to where the camping areas are and find it quicker. We arrived when the sun was setting. The park closes at… ...Read More

If you have a waterfall story or write-up that you'd like to share, feel free to click the button below and fill out the form...
Nojoqui Falls Is Just Beautiful! March 20, 2011 3:50 am by Delia - I've been living in Santa Barbara for 3 1/2 years. A photographer friend of mine invited me to go with her to Nojoqui Falls one afternoon, so off we went! It was a beautiful day; not too hot. The hike to the waterfall is very easy and not too long. The base of the falls… ...Read More