Rose Valley Falls was perhaps one of the easier waterfalls that we’ve visited, especially considering it was near the rugged expanse of the Sespe Wilderness north of Ojai.

Therefore, it wasn’t surprising to see that this was also the type of excursion where we tended to see families making a visit.

Perhaps the only caveat to this place was that it probably stretched the limit on what could reasonably be done in a day from Los Angeles given that the falls was probably closer to Santa Barbara than downtown LA.

Nevertheless, the effort was well worth it as Rose Valley Falls consisted of a lower drop of 80ft or more as well as an upper drop of at least 100ft, which made it one of the more scenic local waterfalls.

It was also a limestone-type waterfall that seemed similar in character to say Nojoqui Falls and Limekiln Falls.

That limestone characteristic also gave rise to a small cave where it was possible to crawl in one side and crawl out the other side behind the foot of the waterfall!

Indeed, this was one of those places where we relished the opportunity to bring our daughter along and really get to experience this place (especially when we’d go to Santa Barbara).

The Hike to Rose Valley Falls

The hike to the base of the Rose Valley Falls was on a well-established, gently uphill trail with a length of about 0.4 miles each way.

We were able to catch glimpses of the upper waterfall (if there’s enough water in the creek) from the initial sections of the trail.

However, as we got closer to the falls, the views of that upper waterfall became more obstructed.

Anyways, the trail crossed the creek a couple of times, which may or may not be trivial depending on how much water was in the creek.

After barely 15-20 minutes on the hike, which passed by some minor cascades and waterfalls (each with steep informal scrambling paths to access them), we’d eventually get right up to the base of Rose Valley Falls.

During the final approach, most of the views of the falls were obstructed by trees until we got right up to its base.

Upon closer examination of the base of the falls, we could see the mineral-laced (of calcium carbonate or limestone) creek actually growing the underlying rock.

However, it was that limestone quality that also prompted locals to show us that it was possible to crawl beneath one of the small openings of the bottom of the limestone.

Once inside, we found ourselves in a tight cave where we could continue crawling and climbing our way to the other side of the waterfall.

With a headlamp or strong flashlight, one can see the travertine formations within the mini “cave”.

One of the locals even said that there were bats and large cave spiders in there as well.

Given how wet the crawl spaces were, this would probably be better suited to film on a GoPro

instead of risking water damage to the digital SLR camera.

Rose Valley Falls resides in the Los Padres National Forest near Ojai in Ventura County, California. It is administered by the USDA Forest Service. For information or inquiries about the area as well as current conditions and permits, visit their website.

To get to Rose Valley Falls from LA, we’d have to drive north on the 101 Freeway towards its junction with Hwy 33 near Oxnard (between Camarillo and Santa Barbara).

It would take us roughly 90 minutes of driving from Los Angeles to Ojai without traffic.

Then, we’d have to drive north on Hwy 33, which starts off as a highway before becoming a mix of streets with traffic lights and rural roads (actually even coinciding with Hwy 150) en route to Ojai.

Once in the village, we would turn left at the traffic light junction with Maricopa Highway.

Then, we would drive the next 15 miles or so along the winding and rockfall-prone Maricopa Highway (Hwy 33) into Los Padres National Forest.

Along the way, we could purchase an Adventure Pass at the Wheeler Gorge Visitor Center.

After around 15 miles, we turned right at the signpost for the Rose Valley Campground and Piedras Blancas.

Then we continued along this road for the next 3-4 miles towards a 4-way stop sign intersection.

Had we missed this intersection and saw the Rose Valley Gun Club, then we went too far.

Turning right at the 4-way intersection, we drove a little less than a mile further into the Rose Valley Campground area where there’s day-use parking area near Campsite 3.

The trail begins besides Campsite 4.

En route to the campsite area, we did manage to spot the Upper Falls assuming there was enough water in the creek to see it.


Bottom up sweep from the base of the falls 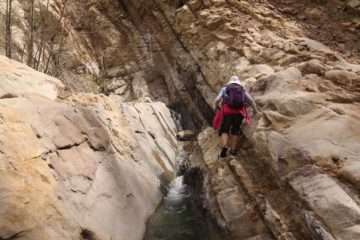 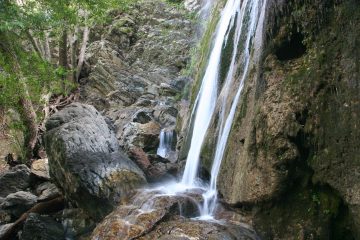 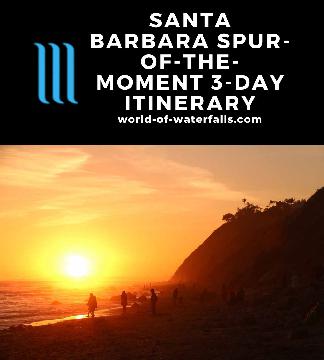 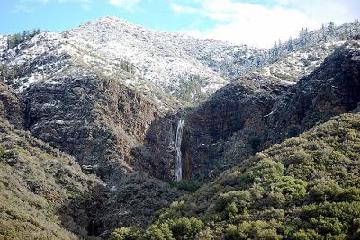 Driving up to the snow March 1, 2011 4:49 pm by Adam Pardee - Me and a friend were driving up through the 33 to see some snow because snow level had dropped a lot and hadn't been in the snow for a few years so we went. He showed me a place where he got dropped off for a hike to go through Sespe Creek into Filmore, and… ...Read More