Rubio Canyon Falls was a series of multiple seasonal waterfalls with a bit of a checkered past nestled within a steep canyon in the foothills of the San Gabriel Mountains in Altadena.

There were several other named waterfalls that were either coming in from smaller gullies or were sections that happened to be named that could be merged with the ones just mentioned.

The photo you see above only shows the combination of the 25ft Ribbon Rock Falls and 20ft Moss Grotto Falls, respectively.

In order to access just these lowermost of the Rubio Canyon Waterfalls, I had to endure a rough stream scramble with lots of overgrowth.

The seasonal creeks draining into Rubio Canyon have small watersheds, which means they don’t last long.

Generally, if you want to see the Rubio Canyon Falls have flow, you’d have to show up in the late Winter through Spring, but that only applies if the area has seen sufficient precipitation in that time.

We’ve had to deal with notoriously dry Winters (further exacerbated by Global Warming) so there could be years where the waterfalls hardly flow at all even in the “wet” season.

However, if there has been substantial precipitation, I’d argue that you may have a window of perhaps a few weeks (maybe a month or two) after the passing of the last rain storm before the falls would trickle or dry up again.

The Checkered History of Rubio Canyon

All of the nomenclature regarding each of the Rubio Canyon Waterfalls suggested that they used to be accessible, and indeed, there used to be steps that accessed each one as far up as the Thalehaha Falls.

Back in that heyday, these waterfalls were once featured attractions at the foot of the Great Incline, which was a funicular that went up a steep cliff leading to the bottom of the Mt Lowe Railway.

That railway ultimately went to the “White City” atop Echo Mountain, where there was a series of Alpine-style Hotels with views over the Los Angeles Basin.

It was almost as if they tried to re-create the infrastructure that you would currently see in say the Lauterbrunnen Valley in Switzerland.

Anyways, to make a long story short, the Mount Lowe Railway project was ultimately abandoned after a series of calamities had made it not economically viable to continue.

Just to give you a sense of some of the neighboring geography, I recalled reading a sign about this railway from the Mt Lowe Road, which was now a mostly-paved trail in the ridge above Millard Canyon.

Nevertheless, the negligence and aftermath of the abandonment of the Mt Lowe Railway infrastructure in Rubio Canyon didn’t end there.

It wasn’t until late 2004 that the debris field started to wash away from flash floods as a result of some early season storms that continued into the Spring of 2005.

Thus, the Rubio Canyon Falls were once again revealed though any hope of accessing these waterfalls at this point now involved rough off-trail scrambles.

This was when I stumbled upon an LA Times Outdoor article sitting in the break room at work, where the article discussed the Waterfalls of Rubio Canyon.

Ever since I saw that article, I had been meaning to finally visit these waterfalls, but little did I realize that it would take another 15 years before that would finally happen!

The Hike and Scramble to the Rubio Canyon Waterfalls

The adventure to the Rubio Canyon Falls requires a hike and stream scramble for a round-trip distance of about 1.8 miles according to my GPS logs.

Of this distance, about 0.5 miles of it was on a pretty standard trail.

However, the remainder of the adventure was pretty much stream scrambling, which ultimately led up to the base of the Ribbon Rock Falls and Moss Grotto Falls.

The stream scrambling was pretty moderate and didn’t involve any severe climbing.

Along the way, I noticed some of the remnants of the heyday of the Mt Lowe infrastructure, but Nature had pretty much reclaimed most of Rubio Canyon.

Perhaps the only other signs of civilization down here now were the presence of water pipes, which were likely set up for diversion before the creek’s waters would eventually end up in an underground aquifer or in the debris basin.

Beyond the Ribbon Rock Falls and Moss Grotto Falls, however, the scrambling became even more intense and riskier.

I ultimately settled on only visiting the bottommost waterfalls on my first visit here.

I’ll need much more time and the right circumstances in order to access Grand Chasm Falls as well as the overlook for Thalehaha Falls let alone Leontine Falls.

In any case, this rough adventure was by no means suitable for neither younger children nor the unprepared.

It ultimately took me under 2 hours to complete this excursion including a rough 20-minute failed attempt to pursue the Grand Chasm Falls.

The hike began from a rather obscure trailhead right in between a pair of residences (see directions below).

Since this trailhead was in a residential neighborhood, I definitely drew a lot of notice from local residences so it was definitely wise to tread lightly.

After going through the somewhat hidden corridor between the homes, I was then on an established trail where there was a trailhead sign board.

Beyond the signboard, the pretty tame Mt Lowe Railway Trail went for about 0.1-mile before reaching an unsigned junction (which was just past a bridge and some water pipes).

I went right at this junction to leave the Mt Lowe Railway Trail and descend a few switchbacks (just under 0.2-mile) right into the creek running through Rubio Canyon.

Once at the bottom, it was pretty much an off-trail stream scramble for the remaining 0.6 miles though there were traces of use-trails alongside the creek from time to time.

Within minutes of this scramble, I noticed what appeared to be the ruins of a wall on the left side though I wasn’t sure if it belonged to any of the Mt Lowe Railway and Pavilion infrastructure.

At about 0.2-mile further upstream, I went past an intermediate waterslide as well as faced what I think was the location of Maidenhair Falls.

It wasn’t flowing during my visit, but I did notice that there was another trail descending into the canyon from what I think was the Camp Huntington Trail on the east-side of the canyon.

In another 0.1-mile of scrambling, I reached the remnants of what appeared to be the Rubio Pavilion, which were nothing more than foundations at this point.

Just beyond the pavilion remnants was a “trail” junction next to a dead-fall where the path on the left appeared to climb to some ledge though I didn’t pursue that path any further.

Continuing upstream past the dead-fall, I scrambled an additional quarter-mile as the canyon continued to narrow even more.

There were sections where I had no choice but to cross or go into the shallow stream, but eventually I arrived at the attractive Ribbon Rock Falls and Moss Grotto Falls.

Beyond the Ribbon Rock Falls and Moss Grotto Falls

While exploring around the Ribbon Rock Falls and Moss Grotto Falls, it seemed like the cliffs surrounding these waterfalls were not safely scalable.

I knew that Grand Chasm Falls was just upstream from these waterfalls, but in order to access that waterfall I had to find a way to get to the top of the Ribbon Rock Falls.

It turned out that there was a side gully continuing further to the east of the creek, where there was a spur deviation that climbed very steeply towards an outcrop high above the Ribbon Rock Falls.

From that outcrop, there was a very sketchy steep descent that would have taken me down to the top of the Ribbon Rock Falls and eventually the foot of the Grand Chasm Falls.

However, the descent looked way too steep for my liking so I ultimately turned back and decided not to chance it.

When I returned to the main gully climbing up the east side of Rubio Canyon, I did contemplate continuing this climb, which would have led up to an even higher outcrop with a view of Thalehaha Falls.

But I also didn’t choose to pursue that route on my first go around.

Had I persisted with that steep climb, I might have spent another couple more hours of very rugged and risky climbing.

In the end, I ultimately turned back and returned to the trailhead after just under 2 hours away from the car.

Rubio Canyon Falls resides in the Angeles National Forest but the trailhead is outside the federal lands in Altadena in Los Angeles County, California. It is administered by the USDA Forest Service. For information or inquiries about the area as well as current conditions, visit their website or Facebook page.

Since the trailhead to the Rubio Canyon Falls sits in a residential neighborhood, there are many ways to route there.

That said, I’ll describe what I think is the most straightforward route heading west on the I-210 freeway from say the I-605 interchange in Duarte.

Turning right onto Lake Ave., we’d then drive for about 3 miles to Dolores Drive.

We’d then turn right onto Dolores Drive and follow it for about 0.3 miles to Maiden Lane, where we’d turn left.

Turning left onto Rubio Crest Drive, we’d then proceed for another 0.1-mile before turning right onto Rubio Vista Road.

Finally, we’d find street parking near the street corner, where the trailhead began between the homes addressed 1342 and 1351.

Note that because this is a residential area outside of National Forest lands, you don’t need to display a Forest Service pass while parked here.

However, this is a quiet neighborhood so please exercise common sense when it comes to being discreet and not blocking driveways while parking. 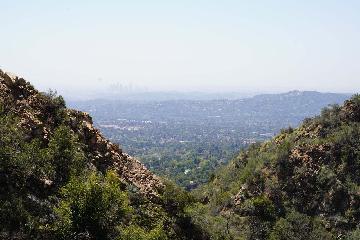