Soldier Creek Falls (also referred to as Lewis Falls after a ranger that once patrolled this area) seemed like one of those obscure waterfalls that made for a surprisingly pleasant local outing.

It was a modestly-sized 40-50ft waterfall though we have noticed over the years that it appeared to have even more hidden tiers further above its main drop.

Nevertheless, it was the relative seclusion that we thought was the main draw of this waterfall.

The reason why we thought it was obscure was because there were no signs indicating its trailhead (see directions below).

It also required a bit of an unmaintained scramble to reach it.

Further exacerbating the uncertainty of a sighting of this waterfall was a prolonged closure of the access road to Crystal Lake for over several years.

This was largely a result of the 2002 Curve Fire and then subsequent road washouts that complicated rebuilding efforts.

My Mom and I even once made an attempt to come here back in Spring of 2009 and this road was still closed at the time.

I also didn’t think the Station Fire later that year did any of the reopening efforts any favors either.

Nonetheless, each time we did manage to visit this waterfall, it had satisfying flow and thus made it both pleasing and memorable.

From the unmarked trailhead (see directions below), we hiked gradually uphill on an established trail that followed along the eastern banks of Soldier Creek.

This trail passed by a pair of cabins that were either untouched by the fires or were rebuilt.

Some of these cabins seemed to have a new-looking appearance while being surrounded by evidence of past fires (from the black-barked trees in the immediate area).

Beyond the second cabin, there were a couple more cabin foundations (probably cabins that didn’t make it from the fires and weren’t rebuilt) that the trail passed by.

It was after the second foundation, which had fences and railings surrounding it, did the path then cross the creek and transition from an assuring established trail to a pretty rough scramble.

In fact, I suspected that the trail was as established as it was up to this point because of those cabins.

Anyways, the remainder of the “trail” pretty much involved ducking under or climbing over fallen trees, balancing on logs, using both hands and feet to negotiate trickier “sit and scoot” spots, and brushing against some thorny foliage.

I recalled our experience back in 2001 involved a bit more stream scrambling.

However, our most recent visits in 2013 and 2017 involved a bit more rough scrambling where we had to be very wary of the obstacles and minor dropoff hazards, especially since we were hiking with kids.

Speaking of which, once we got to the boxed-in three-sided-enclosure at the head of the canyon, that was where Soldier Creek Falls was at.

It faced towards the opposite wall in a limited amount of real-estate.

So most of the views of the falls were pretty much right up in front of it (thus making it non-trivial to photograph the whole thing in one shot without a wide angle).

To even get in front of the falls, we had to cross Soldier Creek one last time and that was where hiking sticks and/or Gore-tex boots helped keep our socks dry.

In our latest excursions, we’ve managed to see other hikers in rugged gear.

On one occasion, we saw two other hikers wearing very wet and muddy pants.

We didn’t ask them whether they went beyond the waterfall, but we figured that they did somehow.

In another instance, there was a family of four dressed in camouflage while wearing rugged boots and gloves, and they looked ready to get rough and dirty on this trail.

In any case, we’re not sure what was beyond Soldier Creek Falls (if that was where they went or were intending to go), but any further scrambling upstream seemed to be very technical and beyond our comfort level.

Adding it all up, we probably spent about 60-90 minutes encompassing both the hiking, scrambling, and photographing.

However, on those times when we did bring our daughter (the first time at two years and later at six years) as well as my parents, I’d imagine that might have slowed us down.

After all, we had to be sure and steady with our hiking, especially considering the extra care and caution that was necessary to negotiate the hairier spots of the hike.

To reach Soldier Creek Falls (or Lewis Falls) from the I-210 and I-605 interchange near Duarte and Monrovia (well east of downtown Los Angeles), we headed east on the I-210 towards the Azusa Ave (Hwy 39) offramp in the city of Azusa.

Then, we turned left and passed through some traffic lights in downtown Azusa before continuing on into the mountains.

By then, the road wound about in opposing two-lane traffic so there were limited to no opportunities to safely pass slow vehicles, including bikers.

After just under 19 miles from the Azusa off-ramp (passing by the Coldbrook Camp but we were well before Crystal Lake Recreation Area), we reached a hairpin turn with a snow pole (there used to be a sign that said “No Fires” here).

Besides our memories and our pre-trip GPS waypoints, this was the only clue that we were in the right place.

A ranger at Crystal Lake also informed me that this trailhead was near the mile marker labeled 34.84.

As an alternate to the direct method stated above, my parents (who were familiar with this area), also suggested that you could avoid the traffic lights of downtown Azusa for the most part.

You’d do this by exiting Irwindale Ave instead of Azusa Ave (since the I-210 goes southeast).

Then, you’d go north towards Foothill Blvd and turn right.

Next, you’d follow Foothill Blvd until you reach Azusa Ave (Hwy 39) and turn left to continue going north on Hwy 39 towards the trailhead. 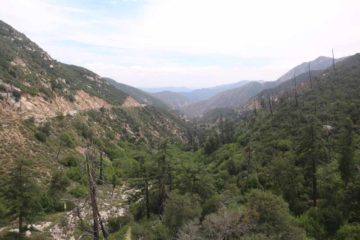 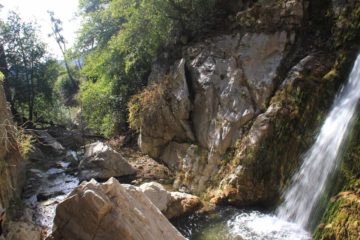 Diamond Jans (Soldier Creek Falls) August 20, 2016 1:18 pm by Matthew - Does anyone remember this place back in the 80's just about 100 yards up the road f on the trail leading to the falls, my aunt and uncle use to on it back then I used to be one Of the cooks, my friend Donald was a waiter , we were like 13 years old,… ...Read More

Highway 39 is reopened March 30, 2011 7:20 pm by Fredric L. Rice - Caltrans has reopened the highway after being closed for nearly 10 years due to extensive fire damage (Curve Fire) and then the 2005 flooding. Access to Lewis Falls is difficult due to the inability for volunteers to get in to the area to maintain the trail leading to the falls. In that video you can… ...Read More