Sonoma Creek Falls was kind of our waterfalling excuse to explore part of the famed Bay Area wine country of Sonoma and Napa Valley.

In particular, this waterfall was in Sonoma County as part of the Sugarloaf Ridge State Park, which protected the part of the Mayacamas Mountains (i.e. the mountains separating Napa Valley and Sonoma Valley) protecting the Sonoma Creek watershed near Kenwood.

Indeed, the Sugarloaf Ridge itself apparently had a substantial enough of a drainage system to supply Sonoma Creek with a surprisingly healthy flow draining west into Adobe Canyon.

Even though we never would have thought that a legitimate waterfall could exist in either Napa Valley or Sonoma Valley (due to the somewhat dry climate and very intense cultivation at the expense of Nature), the Sonoma Creek Falls made us reconsider this assertion.

While the waterfall has a modest-sized multi-tiered characteristic with a cumulative height of about 15-25ft, I found the waterfall’s surprising longevity, cool air (even when it was hot elsewhere), and surrounding serenity to be Sonoma Creek Falls’ most alluring attributes.

I tended to think of Sonoma Creek as having a seasonal flow that wouldn’t last that long after the last significant storm.

That said, to better illustrate the longevity of Sonoma Creek Falls, we’ll call attention to a couple of our firsthand experiences.

The first time we made a visit was in mid-May 2016, which was actually a fairly above-average rainfall year.

In fact, we recognized that a scattered storm that caused snow to fall around Lake Tahoe during this visit might have also rejuvenated the waterfall, and that in turn provided us a little more slack in terms of timing our visit.

However, as you can see in the photo above, it had a pretty healthy flow this far into Spring that year.

The second time we made a visit was in late February 2020, but this followed a very dry January and February after a pretty intense series of storms had hit most of California through most of December.

While the surrounding hillsides of both Napa and Sonoma Valleys were plagued with brownish hills (worrying signs of the start what seemed to be a dry Winter), Sonoma Creek appeared to still remain resilient.

In fact, we visited on a pretty hot day, but the area around Sonoma Creek in Adobe Canyon was refreshingly cool.

The bottom line is that the health of Sonoma Creek depends on whether enough rainfall had accumulated in the season to sustain the creek’s flow in the Winter and Spring months.

Generally, I have doubts that this waterfall would last that far into the late Spring and early Summer periods, and it probably won’t have any significant flow again until the following rainy season in the Winter.

That said, I can totally foresee a scenario where Sonoma Creek Falls may run dry or just trickle in the Winter of a drought year so you really have to pay attention to the rainfall totals and the recent weather history for the best experience.

The first option started from its upper trailhead and descended to the waterfall before either returning back the way we’d come from or continue descending to the lower trailhead.

The second option started from its lower trailhead, and then gently climbed up to the waterfall before returning back the way we came (though you could keep walking up to the upper trailhead if you wanted to).

Both options required a hike of about a mile in total, but I found the lower trailhead option to be logistically more straightforward.

We’ll start with the shuttle hike from the upper trailhead since I thought that was the most obvious way to do this hike as far as finding trailhead parking was concerned.

Sonoma Creek Falls and the top to bottom shuttle hike

From the upper trailhead, we went right across Adobe Canyon Road, where the Canyon Trail immediately left the road and descended into the shaded cover of the forest.

The trail continued descending fairly moderately (losing about 300ft) with Sonoma Creek being heard throughout as the trail pretty much followed its flow.

Shortly before descending to a footbridge, we noticed a sign (saying “waterfall”) pointing the way to a spur path on our left leading us right to the base of the serene Sonoma Creek Falls.

Upon taking this spur path, we then found ourselves right at the bouldery base of the Sonoma Creek Falls.

It took us around 20 minutes to get to this spot from the upper trailhead.

We then had a choice of either walking back up the way we came or continuing the descent towards the lower car park as a one-way shuttle hike (assuming you have a willing driver to pick you up down there).

From the lower trailhead (also called the Goodspeed Trailhead), I crossed Adobe Canyon Road and then walked up a fairly steep grade alongside the road for about a quarter-mile.

Along the way, I passed by a limited pullout for the nearest parking to the actual lower trailhead on the right, which also happened to be about 100 yards further uphill.

Once I left the road and followed the well-established trail down a brief descent towards the Sonoma Creek, I then followed the trail as it meandered beneath towering trees (many of which had blackened barks from a recent fire) while continuing further upstream alongside Sonoma Creek itself.

It was this part of the trail that really made us feel like we were in a tranquil and relaxing place, especially when you contrast this experience with the road rage and crowds that tend to occur in the wine country valleys on either side of the Sugarloaf Ridge.

Also after around 20 minutes of mostly flat hiking, we ultimately reached the aforementioned “Waterfall” sign pointing to the right, which we then promptly took to reach the base of the quaint Sonoma Creek Falls.

After having our fill of the waterfall, we backtracked to the lower parking area and trailhead to complete the one-mile excursion.

If you find that a one-mile hike might be too short or a bit too much on the modest side, we did have the option of extending the walk to a longer 3.5-mile loop that would include both the trail described above as well as a return leg going up (or down) the Adobe Canyon Road.

Overall, the shuttle hike (where my Mom took the car and picked me up at the other trailhead) took me about 45 minutes. However, we took even less time than that on the out-and-back trail starting from the bottom.

Sonoma Creek Falls resides in the Sugarloaf Ridge State Park near Kenwood in Sonoma County, California. Although it resides in a California State Park, it is administered by Team Sugarloaf (it is farmed out to them by the California Department of Parks and Recreation). For information or inquiries about the area as well as current conditions, visit their website or the state park website.

There are a couple of approaches to reach the Kenwood, which sits in Sonoma Valley between downtown Sonoma and Santa Rosa.

I’d imagine it’s fairly straightforward to get to either town from the Bay Area so we’ll leave those details to your favorite routing software or app.

Starting from downtown Sonoma at the south side of the park, we headed west on Napa Street for about a mile to the Sonoma Highway.

Finally, we followed the Adobe Canyon Road for about 2.3 miles to the lower parking area on the left side of the road (also called the Goodspeed Parking Lot).

The “parking lot” was an unpaved space between the road and Sonoma Creek just before the gate for Sugarloaf Ridge State Park.

In order to access the upper parking lot, we had to drive another mile up the Adobe Canyon Road, where there was a clearing on the left side of the road opposite the upper trailhead.

To continue to the Sugarloaf Ridge State Park Visitor Center, we continued another quarter-mile on the Adobe Canyon Road before turning right into the facility, which was where we paid the $8 day use fee.

That said, by the time you read this, there might be automated parking machines at each trailhead so you wouldn’t have to go all the way to the visitor center before backtracking to the trails.

Overall, this drive took us around 25-30 minutes (depending on the traffic in downtown Sonoma).

From the US101 Freeway exit onto the Hwy 12 in Santa Rosa, we would head east on the Hwy 12 for almost 11 miles to the Adobe Canyon Road on the left.

Turning left across the busy highway and onto the Adobe Canyon Road, we then followed the directions as above to either of the parking lots or the visitor center for the Sugarloaf Ridge State Park.

Overall, this drive should take around 20 minutes or less depending on traffic. 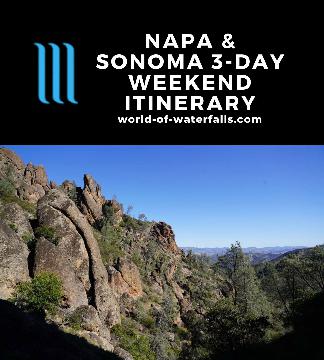 Long Weekend Northern California Waterfall Introduction with Mom Itinerary – May 19, 2016 to May 22, 2016