Tahquitz Falls (pronounced “TAH-kitz” and not “tah-KITZ”) was one of the more spectacular desert waterfalls we’ve ever experienced.

Typically, we tend to avoid driving way out to the deserts for waterfalls.

After all, we generally perceive them to not have reliable flow so we wouldn’t feel like they would be worth the trouble.

That said, this waterfall seriously made us reconsider those thoughts and perceptions as our recent experiences with this roughly 50 or 60ft waterfall would attest.

Indeed, this place really opened our minds up to the possibility of experiencing more waterfalls in the deserts this far east of the Los Angeles basin.

The Checkered Past of Tahquitz Canyon

Julie and I were amazed how we could’ve missed this waterfall during our years of waterfalling.

One reason could be that this waterfall sat in a canyon that was hidden from pretty much the rest of Palm Springs as the canyon’s mouth didn’t face the rest of the city.

Meanwhile, the canyon itself was mostly concealed by tall cliffs.

But perhaps the main reason why we weren’t even aware of this falls until our first visit in 2011 and later was that it was closed to the public before 2001.

That was when the Agua Caliente band of Cahuilla Indians finally finished work to restore the area.

During their restoration efforts, they removed graffiti, evicted transients, and made the otherwise rugged trail more manageable for visitors from the neighboring resorts in Palm Springs.

Indeed, the fee to visit this part of tribal lands seemed pretty steep, but at least those fees were being put to good use as evident in the benign and family-friendly trail conditions.

About the Trail to Tahquitz Falls

The hike consisted of a two-mile loop with interpretive markings throughout that were keyed to the trail map provided by the visitor center.

Most of the points of interest were Native American sites such as rock mortars, rock art, natural shelters, and even an old ditch.

We’ve noticed that the direction of the hike tended to change with the conditions.

For example, the first time we visited Tahquitz Falls back in 2011, we did the loop hike in a clockwise manner.

The second time we visited the falls in 2017, we stayed close to the cliffs on the east side of Tahquitz Creek before turning back due to flood damage on the other half of the trail.

The third time we visited the falls in 2019, the trail signage had us do the loop hike in a counterclockwise manner.

Even though the loop could be done in less than an hour, we very easily could have consumed the better part of a half-day checking out the various spots and chilling by the waterfall itself.

We generally took our time in each of our visits, which consumed roughly 90 minutes to 2 hours, including all the stops and picture taking.

Nevertheless, how the authorities want you to do this hike may change.

So in the interest of keeping this page at a manageable length, we’ll do the trail description based on our first visit as if it was done in a clockwise manner.

That way, we would benefit from the morning shade provided by the steep cliffs on the east side of Tahquitz Canyon before exposing ourselves to the hot desert sun on the way back.

The Tahquitz Falls Hike from the Visitor Center to the Loop

After paying the entrance fee and getting our wrist bands, we then proceeded to the back of the visitor center where the trail began.

The first quarter-mile of the hike was wide open and exposed to the sun as the trail made a bend to the left just as it started to skirt by the east bank of Tahquitz Creek.

After this initial quarter-mile, the trail briefly forked.

The left fork provided access to the Sacred Rock, which was a giant rock said to have rock art on it. It eventually looped around and rejoined the main trail after a short descent to the rock bridge traversing Tahquitz Creek.

The right fork descended directly to the rock bridge over Tahquitz Creek. We spotted some thorny plants where edible wolfberries grew alongside the trail in this stretch.

Beyond the rock bridge, the trail started to ascend as it followed along the west bank of Tahquitz Creek.

Up ahead, we could see in the distance the cliffs where Tahquitz Canyon boxed itself in, and we knew that the waterfall had to be there.

After another quarter-mile, we encountered a trail junction where a sign may or may not be there to direct us one way or the other.

This was one end of the longer loop that skirted Tahquitz Creek to Tahquitz Falls.

Even though the authorities may want you to hike this loop in a particular manner, we’ll describe this part of the loop in a clockwise manner.

Taking a left turn at the trail junction, we then crossed a pair of rock bridges as the trail ascended past an interesting flat rock that provided nice views towards the mouth of Tahquitz Canyon.

Nearby, we also saw more of those thorny plants that grew those edible orange wolfberries.

The trail then continued its climb beneath the tall cliffs that concealed much of Tahquitz Canyon from the rest of Palm Springs.

The presence of giant boulders flanking the trail suggested that these cliffs continued to supply parts of itself.

It reminded us that erosion continues to work away and reshape the landscape while exposing the underlying geology that gave rise to the canyon and the waterfall itself.

One time, we spotted desert bighorn sheep high up on these vertical cliffs.

The climb persisted for the next 0.4 miles (comprising the majority of its 350ft elevation gain in this stretch) as the trail started to converge towards Tahquitz Creek while revealing some smaller and hidden cascades.

Eventually, the trail then descended to the shaded plunge pool of the Tahquitz Falls, which was a very popular spot to both play in the icy cold water, take selfies, and have a picnic lunch.

In order to get more frontal views of the falls (like in the photo at the top of this page), we had to rock hop our way onto the middle of Tahquitz Creek.

That way, the foliage above us and the cliffs to the side of the falls didn’t obstruct the view.

From here, it looked as if Tahquitz Falls had split the cliff while deep blue skies contrasted with the bright white cliff face itself.

Perhaps the only thing keeping this spot from being the de facto spot to take photos was the mist from the falls blowing downstream!

The rock hop bridge over Tahquitz Creek continued towards the opposite side of the creek.

This began the other half of the long loop, which followed the west bank of Tahquitz Creek while being more exposed to the sun.

This stretch of trail skirted the foot of the cliffs on the west side of Tahquitz Canyon before descending steeply towards the banks of Tahquitz Creek near the USGS Gauging Station (about a quarter-mile from Tahquitz Falls).

After briefly meandering tantalizingly close to Tahquitz Creek, the trail then veered away from it as the path followed what appeared to be a dry creek.

At a sharp bend in the trail, we spotted an old ditch or contraption originally built by the Cahuilla in 1830.

We suspected that the dry creek must have been the ditch that diverted part of Tahquitz Creek for harvesting.

Eventually, after 0.2 miles, the trail rejoined the junction to complete the loop.

The remainder of the hike backtracked the remaining half-mile to return to the visitor center with views towards the basin in the direction of downtown Palm Springs.

Ever since we became aware of Tahquitz Falls, we’ve seen in the literature other photos where the falls either trickled or didn’t flow well at all.

As far as we could tell, our visits just so happened to have occurred during wet years where substantial snowmelt from the San Jacinto Mountains resulted in very high flow.

We suspect under such years that the flow would most likely peak during the March through May timeframe.

Although springs also feed Tahquitz Creek, seeing it flow in all its glory really depends on the snowpack and how hot the weather becomes to melt the snow.

Thus, our Tahquitz Falls experiences probably reflected higher-than-typical flows that spanned the months of February through May under such heavy snowpack years.

I’d bet that such years might even cause the waterfall to flow impressively through the start of the scorching months like June and maybe even into July!

That said, in years where the San Jacinto Mountains wouldn’t get as much snow, then I could foresee the flow might peak much earlier in the start of Spring (March) and thus trickle by June.

Tahquitz Falls is on private property in Palm Springs. It is administered by the Agua Caliente Band of Cahuilla Indians Reservation. For information or inquiries about the general area as well as current conditions, you may want to try visiting their website.

From the Los Angeles basin, we would follow the 10 freeway east all the way to the low deserts. Alternatively, we also followed the 91 Freeway east until it merged with the 60 Freeway, and then merged with the 10 Freeway around Beaumont and Banning.

That was when the 10 passed by the Cabazon outlet and Morongo Casino, and about 10 minutes east of there, we took the Highway 111 towards Palm Springs.

Once in Palm Springs, Hwy 111 continues through the downtown area as North Palm Canyon Drive.

Beyond the southern end of the downtown area, look for Mesquite Ave, then turn right and follow this road uphill past the Tahquitz Canyon Visitor Center and into the parking lot for the visitor center.

Overall, this drive is about 108 miles (about 2 to 2.5 hours drive depending on traffic) between LA and this trailhead.

They’re open daily from October through July 4th weekend from 7:30am to 5pm though the last admission was said to be around 3:30pm.

In the scorching hot months of July through September, they’re only open on weekends (Friday through Sunday) 7:30am to 5pm.

These hours and prices I’m sure are subject to change.

That said, if you’ve visited Indian Canyons before visiting Tahquitz Falls, it was possible to use a discount coupon obtained from Indian Canyons kiosk to apply towards this hike. 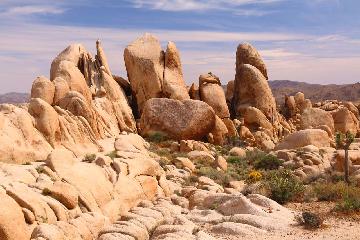 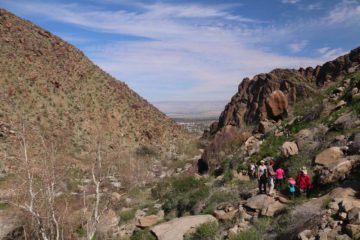 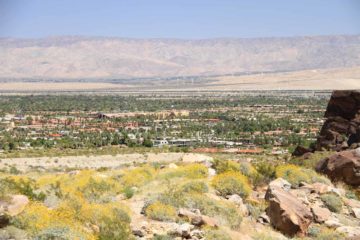