Tokopah Falls (also known as Tokopah Valley Falls) probably has the tallest cumulative drop of the known and accessible waterfalls that we’re aware of in Sequoia National Park.

It’s said to drop some 1,200ft at the head of Tokopah Valley, but the cascade twists and turns as it tumbles its way down into the Marble Fork Kaweah River.

So we never really got to see the whole height of the falls in one shot (if it is indeed as tall as stated).

Watching over the whole scene is the so-called Watchtower – a pointy rock formation across the river on Tokopah Valley.

It prominently showed itself starting at roughly the half-way point of the roughly 3.4-mile round trip out-and-back trail.

We’ve read that this waterfall can dry up in late Summer though each time we’ve come here, it was during Spring.

And for some strange reason, each time we’ve been here, there was enough snow to make the waterfall appear to blend in with the rest of the scenery.

I also had read that it was possible to look down upon this cascade from a different, more strenuous trail to the Watchtower, which leaves from Wolverton.

However, that was something we haven’t tried so we can’t say more on that.

From the trailhead (see directions below), we had to cross a sturdy bridge over the Marble Fork Kaweah River.

Then, we continued on the trail immediately to our right just after the bridge, where a sign indicating “Tokopah Valley Trail” helped us identify where to continue.

Next, the trail pretty much meandered in parallel with most of the river.

The hike felt like it was mostly flat as the elevation gained here wasn’t noticeable.

We were always within earshot of the rushing river (which rushes turbulently in the Spring).

In some stretches, we were close enough to even see the river do its thing snaking through the valley while also letting intermediate waterfalls or cascades keeping the river turbulent.

About half-way into the hike, we started to notice the Watchtower across the river from various angles, which changed as we continued along the trail.

We also noticed some tall but temporary waterfalls as well, which helped to keep our interest in the scenery throughout the hike.

Also across the river, we noticed other imposing granite formations, which seemed to harbor additional ephemeral waterfalls hidden within their nooks.

We also happened to see some deer during this mostly flat stretch, which further assured us that this part of the ecosystem was more or less healthy and minimally disturbed by man.

Eventually after about 1.5 miles into the hike (after crossing over a pair of creeks), the trail started to get rougher as we traversed a large boulder field and gained most of the overall 500ft elevation change.

It was also during this stretch that we started to get a clean view of Tokopah Falls and its twisting cascade coming down the head of the U-shaped Tokopah Valley.

As we got closer to the end of the trail, less of the uppermost tiers of the waterfall was seen.

However, we then got to examine more closely the tumbling cascade’s main “bulbs” (since that was how some of the cascade appeared to us).

We opted not to do any more scrambling beyond trail’s end to go any higher or much lower as the scrambling became trickier and a bit more treacherous with the presence of the fast-moving water.

Also from the very end of the trail, we were able to look downstream where we could see the pointy peak of the Watchtower.

In addition, we spotted more surprise ephemeral waterfalls plunging right across from Tokopah Falls as well as beneath the base of the Watchtower.

For the purposes of photography, it seemed like this was an ideal afternoon waterfall as the falls faced west.

Anyways, this was our turnaround point, and the rest of the hike back was pretty smooth sailing as it was pretty much all downhill.

Tokopah Falls is in Sequoia National Park near Visalia in Fresno County, California. It is administered by the National Park Service. For information or inquiries about this area as well as current conditions, visit the NPS website.

To get to the Tokopah Falls Trailhead, we first had to get to the Lodgepole Campground turnoff.

This sat right at the heart of the vehicle-accessible part of Sequoia National Park (about 75-90 minutes north of Three Rivers at the south entrance of the park).

Turning into the campground and its large parking lot, we drove about 3/4-mile to the Log Bridge part of Lodgepole Camp.

There was a bridge traversing the Marble Fork Kaweah River here, and the trail started immediately to the right just after crossing the bridge.

Left to right sweep of the falls under some threatening skies, also showing the Watchtower 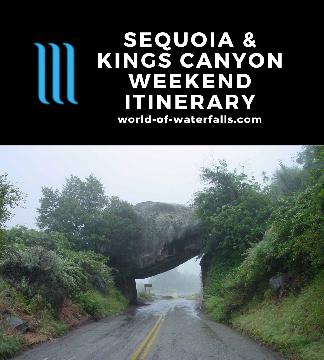