Bridal Veil Falls was a pretty tall multi-tiered cascade said to have a cumulative drop of some 1200ft.

I had doubts about that gaudy height figure because I was only able to see something on the order of 200ft or so.

However, it was also possible that the dense tree cover around the falls might have concealed more of its overall drop.

Plus, the fresh layer of snow from a clearing snow storm during our visit might have also conspired to hide most of the Bridal Veil Falls from us (or at least make it blend in with the rest of the white scenery).

Julie and I thought of this was more of a roadside stop, and the huge pullout or car park on the east side of Hwy 93 made us think this waterfall was supposed to be a bigger deal than the impression we got once we saw it.

Bridal Veil Falls had lighter flow than what we had anticipated, but that might have been a result of the cold weather re-freezing parts of its creek thereby constricting its outflow.

Apparently, this waterfall was sourced from the melting Huntington Glacier (which we couldn’t see from the huge car park).

We even noticed a signpost calling out this waterfall, which suggested that it was probably a bigger deal than what we’re giving credit.

Nonetheless, we needed a strong zoom on the camera lens to keep this waterfall from looking puny in our photographs.

Bridal Veil Falls resides in Banff National Park between Jasper and Lake Louise in the province of Alberta, Canada. It is administered by Parks Canada. For information or inquiries as well as current conditions, visit their website.

From the Columbia Icefields Center (i.e. the Glacier View Inn and Athabasca Glacier access), drive south on Hwy 93 (Icefields Parkway) for about 14km.

On the left (east) side, there’s a very large paved pullout or car park (I’m sure this could easily accommodate at least 3 or 4 tour buses and then some).

Park the car here and look for the signpost and falls towards the south end of the big pullout area.

For some perspective on the distances from the main towns in the general area, the Columbia Icefields complex is roughly 103km (1.5 hours) south of Jasper and 186km (2.5 hours) north of Banff.

Fixated on the falls surrounded by snow 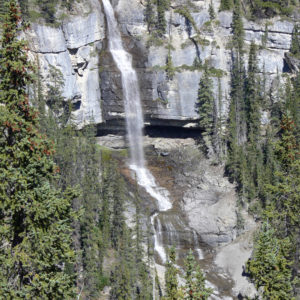 Bridal Veil Falls – Banff National Park, Alberta March 4, 2019 10:01 pm by John Moerk - Bridal Veil Fall is a waterfall on the Icefields Parkway in Banff National Park, Alberta, Canada. It originates in the Huntington Glacier on the slopes of Cirrus Mountain. Its waters drain into Nigel Creek, then into the North Saskatchewan River. It is a class 4 waterfall, with a drop of 1,200 ft and a width… ...Read More