Helmcken Falls was probably the most famous of the waterfalls that we saw in the Wells Gray Provincial Park.

It seemed like tour buses would routinely stop here and offload their busloads of people thereby crowding the viewing deck and picnic area.

I guess the reason for its popularity was that it had a 141m cumulative drop over two distinct plunging tiers.

I had read somewhere that this was said to be the 4th tallest waterfall in Canada so it’s understandable why it gets the notoriety.

Since the waterfall was on the Murtle River, it shared the same river as Dawson Falls further upstream, which also made us think that Helmcken Falls flowed year-round.

Given the volume of something like Dawson Falls squeezing into a narrow chute that caused the river to eject and plunge over Helmcken Falls, we could appreciate its volume punctuated by the waterfall’s height.

During our visit in September 2010, we had to contend with bad weather.

At least the heavy rains were sort of off-and-on at the time so we could linger at the viewing deck without getting drenched.

However, the thing that really tested our patience was the relentless fog that stubbornly stayed around the gorge between the viewing deck and the Helmcken Falls itself.

In fact, the first time we saw it at mid-morning, it was totally foggy so we actually left to visit Dawson Falls before coming back.

After an hour or so, Helmcken Falls finally started to show itself albeit grudgingly (as evidenced by the partially-foggy photo you see at the top of this page).

The walk to the falls was practically negligible as it was perhaps less than five minutes from the official car park.

Sometimes, tour buses would drop off their folks at a pullout, which was even closer to the picnic area and viewing deck than the general parking area.

To my knowledge, there was no official way to get closer to the bottom of Helmcken Falls.

However, we did notice a signpost on the drive to the overlook indicating a Helmcken Rim Trail.

Since we didn’t do it, we can’t really say where it would go and whether it would provide a different yet worthwhile viewing experience altogether.

Helmcken Falls resides in Wells-Gray Provincial Park near Clearwater in the province of British Columbia, Canada. It is administered by BC Parks. For information or inquiries as well as current conditions, visit their website.

We’ll describe the driving route to Helmcken Falls from Clearwater, where we had stayed for the night.

From Clearwater, we drove about 43km north on the Clearwater Valley Road towards the Helmcken Falls Road.

The signposted turnoff was on the left side of the road after crossing the single-car bridge before Mush Bowl.

Once on the turnoff, we followed the road just under 4km to its end where there was a large car park.

To give you an idea of where Clearwater is, it’s about 320km west-southwest of Jasper.

It took us roughly four hours (each way) to do this drive.

We headed west on Hwy 16 into British Columbia (you do have to move the clock back by an hour since BC is on Pacific Standard Time and not on Mountain Time like Alberta), then we headed south on Hwy 5 which ultimately reached Clearwater.

If you’re not coming from Jasper but Lake Louise instead, it’s a pretty arduous 568km drive between Clearwater and Lake Louise (if you’re choosing to take Hwy 1 before deviating from it and heading north on the Hwy 5).

Indeed, it’s a non-trivial drive, but in a way, this break from the touristy part of the Canadian Rockies kind of helped us avoid the difficulties of a snow storm that struck Banff and Jasper during our trip.

We knew that it tended to be warmer in this part of BC since it was lower elevation, and we also knew Wells Gray Provincial Park was much quieter than Jasper and Banff so we ended up with a chilled out experience (despite the tour buses that would come here from time to time).

By the way, if you’re entertaining a visit out this far into the center of British Columbia from the more populous city of Vancouver, Clearwater is about 478km (under 5 hours drive) to the northeast.


Top down sweep of the falls with the fog rolling in 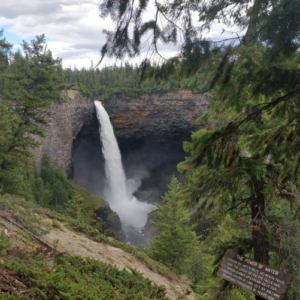 Helmcken Falls May 21, 2021 4:37 am by Azu - This massive waterfall is one of my favorites in British Columbia. During the winter, an ice cone forms at the bottom, which makes for a spectacular scene. I'm always surprised by how powerful this waterfall is, and the gorge in the area is stunning. There isn't really much of a hike here. Just a few… ...Read More