Rearguard Falls was another one of those unplanned waterfalls that we happened to chance upon thanks to its conspicuous sign right off the Hwy 16.

This waterfall was more like a wide series of rapids and cascades, but I guess the significance of the Rearguard Falls had to do with the salmon migration, which I learned from a sign at the car park.

Apparently, the Chinook were the largest and strongest species of Pacific salmon, and they were said to be able to make the 800-mile (nearly 1300km) journey up the Fraser River from the ocean to spawn here.

It was also said that they can be seen in late Summer, but I guess we were just a smidge too late to see them as we didn’t spot any during our late September visit.

From the car park, we took a short walking path that descended to the viewing area right next to the falls.

The sign here was pretty spot on saying it was about a 30-minute return walk.

Another thing I found interesting was that there were a couple of other paths flanking both sides of the viewing area.

It turned out that those paths were for raft or kayak launching and/or portaging.

So that kind of suggested that the Overlander Falls was routinely run by whitewater thrill seekers.

Rearguard Falls resides in the Rearguard Falls Provincial Park near Tete Jaune Cache in the province of British Columbia, Canada. It is administered by BC Parks. For information or inquiries as well as current conditions, visit their website.

The well-signed and wide car park for Rearguard Falls is about 100km west of Jasper along Hwy 16.

Or, it’s about 14km west of the well-signed car park for Overlander Falls.

The car park is on the south side (left side as you head west) of the highway.

Alternatively, the car park is a little over 4km east of the Hwy 16/Hwy 5 junction.

If you’re headed east on Hwy 16, then the turnoff is on your right (and is much easier to access as you don’t have to cross traffic to get to it).

Fixated on the falls from an overlook near the start 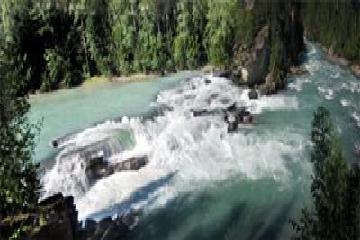