Takakkaw Falls was probably my favorite waterfall of our September 2010 Canadian Rockies trip.

It’s said to drop majestically some 258m in total height with even a waterwheel near its top (where the water actually would get thrown up before falling down).

Watching this waterfall was almost like watching falling water in slow motion.

For some reason, tall waterfalls with volume seem to have a tendency to do this to my mind.

However, I reckon it might have to do with that striking waterwheel that kind of forced me to pay attention to the water’s trajectory as it made its dramatic plunge.

Takakkaw Falls was fairly straightforward for us to visit.

The drive was well-signposted (see directions below), and the mostly paved nature walk from the car park to its base was also very easy.

I recalled that we took about 10-15 minutes even though we were taking our time.

And going slow on this walk was real easy to do because we were able to see the waterfall for almost the whole time from beginning to end.

Of course all this accessibility came at a price as it was real popular and busy.

The only time it wasn’t so busy was when we happened to be here when the weather turned real bad and was pouring rain.

Prior to embarking on the walk to its base, we saw an interesting relief map providing a sense of the terrain and how the waterfalls in Yoho Valley were fed (mostly by hanging glaciers or glacial lakes apparently).

Even at the head of Yoho Valley, we noticed the Yoho Glacier.

However, it was somewhat distant and even noticing it depended on the weather and how many trees would get in the way of the view.

Another sign nearby the map said that the word “takakkaw” meant “magnificent” in the Cree language (which I’d imagine was one of the First Nations People, or Native Americans in Canada).

I reckoned that was a rather appropriate adjective, don’t you think?

Anyways, we took a short paved walking path leading to a bridge traversing the Yoho River fronting a distant Takakkaw Falls, where there was a fork in the trail.

We initially didn’t cross the bridge and instead took the short path on the right, which went up an incline to an alternate overlook from across the Yoho River.

This lookout provided us with a nice contextual view of Takakkaw Falls towering high above the trees all around the basin (see photo at the top of this page).

Across the bridge, the path continued towards the rocky base of Takakkaw Falls where we could really get a sense of how puny we were compared to the falls.

We were even able to look downstream across the valley at other mountains as well as another cascade, which I believe to be called Whiskey Jack Falls.

Julie and I actually visited Takakkaw Falls twice during our Canadian Rockies trip in 2010.

The first time, we had to contend with a heavy downpour.

Even though we had rain ponchos on, we had lots of trouble trying to take photos with my DSLR camera as droplets would keep getting onto the lens, which I feared would cause moisture to get into the grooves of the zoom lens.

It was also fruitless to take self-portrait couple shots under such conditions.

Needless to say, the open air nature of this falls made it a rather difficult bad weather excursion.

Moral of the story: give yourself time and be flexible in your trip planning in case you do run into some bad weather.

Takakkaw Falls resides in Yoho National Park near Field or Lake Louise in the province of British Columbia, Canada. It is administered by Parks Canada. For information or inquiries as well as current conditions, visit their website.

We’ll describe the driving route from Banff since that was where we were based and how we made our visits.

From Banff, we headed north on the Trans-Canada Highway (Hwy 1) towards Lake Louise.

Once we reached the Lake Louise turnoffs, we continued on Hwy 1 for the next 3 km reaching a major junction with the Icefields Parkway (Hwy 93).

We then continued driving on Hwy 1 for another 23km.

The highway descended into a scenic valley where the road flattened out and there was a well-signed turnoff on our right leading to Takakkaw Falls.

Taking that turnoff, we followed it for another 16km to the end of the road, where there was a large car park devoted to the falls.

As we drove further into Yoho Valley, there was a set of two switchbacks that tested the turn radius of the rental car we were driving.

It seemed especially apparent with RVs and campervans having to make these hairpin turns.

With less than 3km or so to go, we were already able to see the falls to our right high above the trees in the foreground giving us a sense of its scale.

However, as we were drawn to Takakkaw Falls and couldn’t wait to get closer, we had to keep in mind that there was another twisting cascade on the opposite side of the valley (to our left) known as Whiskey Jack Falls according to my map

There were some makeshift shoulders to stop the car and take photos of the falls, but given its twisting nature and unfortunate position near Takakkaw Falls, I think of this as more for waterfall collectors.


Bottom up sweep from near its base in fair weather


Bottom up sweep under very rainy conditions from the car park 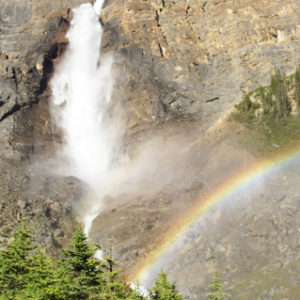 Takakkaw in early summer August 23, 2020 10:33 am by Jose Luis Sanchez Esteban - It seems I went to Western Canada at the right time as I found this spectacular view of the falls with a rainbow as the cherry on the cake. I think this is my Canada's favourite waterfall (I've only been in BC and Alberta) and also my favourite picture from that trip. ...Read More

Takakkaw in early summer August 23, 2020 10:33 am by Jose Luis Sanchez Esteban - It seems I went to Western Canada at the right time as I found this spectacular view of the falls with a rainbow as the cherry on the cake. I think this is my Canada's favourite waterfall (I've only been in BC and Alberta) and also my favourite picture from that trip. ...Read More