Anse La Raye Falls was a pretty cascade inland from the small, but charming fishing town of Anse La Raye on the western side of the island of St Lucia.

Of the handful of falls that we’ve seen on the island, we thought this was one of the better waterfalls to visit.

It probably had a cumulative height of around 15m over over three or four discernable drops.

Once we left the car (see directions below), we followed a trail that began by descending down some steps on end of the shack.

The shack itself had some writing on it warning that the Anse La Raye stream was part of the village’s drinking water so they did not want people bathing in it.

After the short descent, the trail then meandered alongside the creek before we started to see the waterfall after some 5 minutes or so.

We then had to cross the creek, which we had no trouble with during our visit (especially since we were wearing Keens).

Once on the other side of the main creek, we pretty much stood right in front of the Anse La Raye Falls.

Even though this spot was pretty sufficient for getting our fill of the falls, I noticed there was a trail to the left of it that went up steeply along some steps.

It was quite lengthy and I didn’t make it all the way to the end, but it appeared to be a roundabout trail leading to the top of the waterfall (though I’m not totally sure since I didn’t go all the way; so someone please correct me if I’m wrong).

Anse La Raye Falls resides in the Anse La Raye Quarter of St Lucia. It is administered by Government of Saint Lucia. For more information or inquiries about the area as well as current conditions, you can try visiting their website.

The route for both getting to the Anse La Raye Falls and the trailhead itself were not well signposted during our visit.

Since we were coming from the northern part of the island at Gros Islet, we had to drive to Anse La Raye town, then drive into its narrow main street.

From there, we went over a couple of speed bumps, then turn left onto another small street (had we gone to the bridge crossing the Anse La Raye River, we went too far).

There was an arrow sign posted onto a building saying “La Sikwi” (which was a sugar mill) at the intersection.

We followed the arrow and continued down the small side street following more “La Sikwi” signs until we went past the La Sikwi Sugar Mill entrance and continued into the forest.

At this point, the road degenerated into a rough dirt road.

It looked like it was prone to floods, which might explain why it was in the shape it was in during our visit.

It was doable by our rental car (a 2wd passenger vehicles) probably because the road was dry enough, but even then, I’m sure a high clearance vehicle would’ve probably been a safer bet.

However, if the road is wet from rain, then I can imagine it being very difficult to proceed past this stretch.

So beyond this flood-prone section, the road improved again and then went uphill.

We noticed a shack with some writing on it, which hinted to us that this was the trailhead.

So we parked in a pullout near the shack.

Just to give you some context, the drive from Gros Islet to Anse La Raye town was about 34km (taking us at least an hour). Gros Islet was on the opposite side of the island from the airport some 65km away (or 90 minutes by vehicle). The flight from the Miami International Airport to the Saint Lucia Airport was on the order of 4 hours. 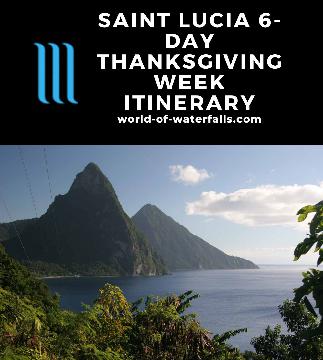 If you have a waterfall story or write-up that you'd like to share, feel free to click the button below and fill out the form...
Anse-La-Raye & St. Lucia robbed at gun point on april 29.2010 carnival victory cruise lines shore excursion…bike and hike. June 3, 2010 3:43 am by Jerry - April 29.2010. Our group of 14 went to Anse-La-Raye water falls on a carnival victory shore excursion and 4 members were robbed at gun point by two masked men. Will not ever go back to the island of St. Lucia. Please take precaution..Not a joke...The un-employment on the island is over 35% ..Not a safe… ...Read More