Anna Ruby Falls was perhaps the largest of the waterfalls we saw in Georgia when we considered the sum of its parts.

The falls consisted of a confluence of two waterfalls (a twin waterfall, if you will).

The waterfall on the left featured a tall multi-tiered series of cascades and steep drops (said to 153ft in cumulative height), while the waterfall on the right had a shorter but more vertical drop, which was said to be 50ft in height.

One thing worth noting is that most of the literature (including Wikipedia and the Forest Service meta description) say the creek on the left was Curtis Creek instead of Smith Creek.

Nevertheless, putting them all together, they combined into Smith Creek, whose union we could see in an impressive display of a virtual wall of water interspersed with the onset of Autumn colors.

Apparently, the Anna Ruby Falls got its name from Anna Ruby Nichols, who was the daughter of a wealthy White County resident and owner of much of the area encompassing the waterfall named John H. Nichols.

Just downstream from the confluence of the two creeks, there were lookouts on both sides of the combined creek.

These lookouts gave us the opportunity to see the Anna Ruby Falls from a few different angles.

The viewing deck on the right side of the combined creek as well as the footbridge over that creek yielded slightly distant but contextual views of the entire waterfall.

Meanwhile, the larger viewing platforms on the left side of the combined creek brought us closer to the falls.

That allowed us to examine the individual waterfalls more closely while trying to take photos directly in front of them.

The walk from the large parking lot (see directions below) to the viewing platforms was 0.4 miles each way (or 0.8 miles round trip) along a mostly gentle paved uphill path.

Given how relatively easy the walking path was, it wasn’t surprising to see both viewing platforms as well as the trail itself crowded with weekenders.

It took us about an hour to do both the walk and the photo taking (which involved a lot of waiting on others given how busy it was).

Anna Ruby Falls resides in the Chattahoochee-Oconee National Forests near Helen in White County, Georgia. It is administered by the USDA Forest Service. For information or inquiries about the area as well as current conditions, visit their website or Facebook page. You can also visit the Anna Ruby Falls Recreation Area and Visitor Center website.

Turning right onto Hwy 356, we drove another 1.5 miles to the signposted Anna Ruby Falls Rd on our left.

We took this road to its end passing through Unicoi State Park (I’m sure the person at the kiosk might be sick of telling waterfall visitors to continue straight through to the other fee kiosk).

There was a very large parking lot for the Anna Ruby Falls.

Given that there was Oktoberfest traffic in the town of Helen that costed us some 15 minutes or so, the overall drive took us about 90 minutes.


Fixated on the falls from the footbridge


Right to left bottom up sweep from the upper platform


Left to right sweep from the lower platform 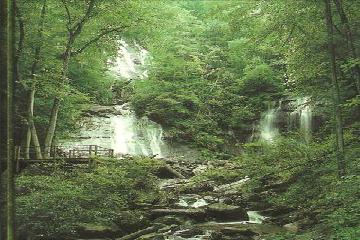 Anna Ruby Falls Cleveland, GA USA July 28, 2012 3:23 pm by Betty Davis - July 26, 2012, we took another hike to Anna Ruby Falls. With a heart condition, I felt a little reluctant to try it. But it's only four-tenths of a mile. There are several fairly steep inclines on the trail, but I did fine and made it to the top. Such a rewarding experience. We made… ...Read More