Big Manitou Falls was said to be the highest waterfall in the state of Wisconsin where the Black River dropped 165ft.

Given the waterfall’s notoriety due to its height, it wasn’t surprising to see that it was both popular and it had a lot of infrastructure to make it accessible to almost anyone.

Thus, our four-year-old daughter didn’t have any trouble viewing the falls from the sanctioned lookouts.

However, we had to contend with unseasonably foggy weather during our Autumn visit in late September 2015.

The fog conspired to keep the falls from being clearly visible, and that photo above was probably as clear as it was going to get during our morning visit.

Although there was a signposted road and parking lot for the main office of Pattison State Park, it turned out that the easiest way to experience the falls was from a separate parking lot (see directions below).

From that nearest lot, we carefully crossed East County Road B before going around a small lawn and picnic area.

On the other side of the picnic area was the small lookout area, where we were able to get the picture you see at the top of this page between an opening in the foliage.

Other views from this side of the Black River further downstream along the trails were obstructed and unnecessary if this waterfall was the primary purpose of a visit.

That said, we noticed that there was another lookout closer to the Big Manitou Falls on the opposite side of the river.

Although it would’ve been possible to directly reach that other overlook from the Park Office (about a mile in each direction), it turned out that we could’ve taken a 0.5-mile walk from the trailhead described above.

It would lead us to a footbridge above the waterfall before ending up at the lookouts on the opposite side of the gorge.

Given how foggy it was, we didn’t bother doing it, but in hindsight, we probably could’ve driven to Little Manitou Falls first then come back.

Perhaps that might have allowed us to more thoroughly explore Big Manitou Falls and the various ways to experience it from both sides of the Black River with a little more time for the fog to burn off.

So given our limited experience from what we think was the best overlook, we only spent about 15 minutes away from the car.

That would make this as close to a roadside stop without actually being visible directly from the road.

However, had we experienced the falls from both sides, it probably would’ve taken more like 45-60 minutes (30 minutes of it would be from walking).

The walking distance would take 15 minutes more had we walked from the park office instead of the Falls Parking Lot.

Big Manitou Falls resides in Pattison State Park near Superior in Douglas County, Wisconsin. It is administered by the Wisconsin Department of Natural Resources. For information or inquiries about the area as well as current conditions, visit their website.

The nearest city of note to Big Manitou Falls was Superior, Wisconsin, which was also a twin city across the state border to Duluth, Minnesota.

The Wisconsin State Route 35 (WI-35) heads south of the town of Superior from the intersection of the US-2 at Belknap Street and Tower Ave (which eventually would become the WI-35).

From this intersection, the most direct route would be to head south on the WI-35 for about 13 miles to the East County Road B.

Turning right onto the East County Road B, the Big Manitou Falls Parking Lot was immediately to the left.

Note that the main office and parking lot was less than a quarter-mile north of the East County Road B turnoff on the east side of WI-35.

This was where I paid the $5 for a one-hour visit.

The $9 non-Wisconsin-resident fee was for the entire day, which meant that if I happened to be visiting any other Wisconsin State Parks on the same day I paid for this pass, then I’d be covered.

Unfortunately during our visit, there was a bridge washout at the Nemadji River.

Therefore, we had to take a detour about 6 miles south of the Belknap St and Tower Ave intersection on the WI-35, then head east on the County Road C.

We’d follow this road for nearly 9 miles (County Road C became County Road A after just under 2 miles), then we turned right (west) onto County Road B.

We followed County Road B for a little under 3 miles before rejoining WI-35 about a quarter-mile north of the signed turnoff for the main office and campgrounds of Pattison State Park or under 0.5-mile north of the car park for Big Manitou Falls.

This detour drive took us roughly 30 minutes though I’d imagine it would be more like 20 minutes without the detour. 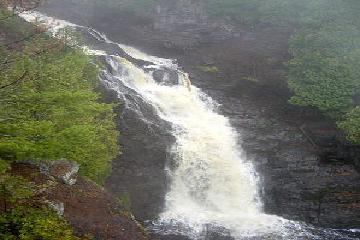