Bond Falls was a waterfall in the western side of Michigan’s Upper Peninsula (or UP for short) that seemed to be a sentimental favorite amongst many “Yoopers” from this part of the state.

It featured a 40-50ft tall cascade while it was upwards of about 100ft wide with a graceful characteristic that seemed to be very photogenic and tripod-friendly.

Just about every “Yooper” (people who lived in or grew up in the UP) that we spoke to in the area considered this to be the prettiest waterfall in Michigan.

They even considered it to be better than the more famous Upper Tahquamenon Falls.

Well, after we finally got a chance to experience Bond Falls for ourselves, we can see where they were coming from.

Moreover, we were able to experience the falls from a variety of positions given the nice boardwalks and trails surrounding this part of the Middle Branch of the Ontonagon River.

Indeed, given its ease of access, character (as Julie likes to say), size, and even some of the Autumn colors nearby, we started to get as sentimentally attached to Bond Falls as the locals were!

The walk from the dedicated parking lot to our first views of the Bond Falls took less than five minutes.

Most of our time spent on this excursion was pretty much checking out the falls from the entirety of the 600ft boardwalk and developed trails right around the impressively wide curtain of water.

At least that was what I was busy doing when not using the tripod to take family photos or watching our daughter drop leaves into the river.

Apparently, this boardwalk was the result of a recent improvement effort that made this waterfall even more accessible to a wider pool of visitors than before.

Now while we made numerous attempts to take photos and try to capture the falls in a way that would adequately convey what we saw and the mood it put us in, admittedly this was not an easy exercise.

The reason was that Bond Falls was so wide with trees obstructing part of its view that it was difficult to get that all encompassing shot.

That photo you see at the top of this page was my best effort though that was at an angle and it kind of made the waterfall look smaller than it really was.

In fact, trying to capture the entire width of the waterfall directly in one shot from the boardwalk was difficult at best though it wasn’t impossible.

Once I had my fill of the front of the Bond Falls from the various angles from the boardwalk, I then swung all the way to the right side of the falls where the trail ascended some steps alongside the slope of the falling water.

Once I got up to the top, I was treated to a handful of tiny cascades tumbling their way down to the main drop of Bond Falls.

As I peered over the brink of the Bond Falls, I was treated to a nice overlook of the immediate area accentuated with some fall colors down below.

Another thing I noticed up here was that there were concrete barricades that seemed to channel that Middle Branch of the Ontonagon River towards the main drop of the Bond Falls.

I thought it was unusual to see such a structure actually “help” the river flow over the waterfall, but perhaps it was there to prevent damage from potentially excess overflow of the river onto the trails and infrastructure here.

Usually, when it comes to man-modifications around waterfalls, they tend to be with the intent of robbing the flow of water from the waterfall to energy production, irrigation, or some other form of exploitation of the water’s flow.

Finally, speaking of infrastructure, while driving the Bond Falls Road further upstream of the waterfall itself, we noticed the Bond Falls Hydroelectric Project.

That meant that the Middle Branch of the Ontonagon River was being held up, and I’d have to believe that this would constrain the average flow of the Bond itself.

We don’t know if the hydro scheme was required to discharge a minimum amount of water like at Superior Falls, but it seemed like this waterfall held its own in terms of year-round flow despite the man-made interventions.

That said, just imagine what a crazy scene Bond Falls would be had it been allowed to flow naturally.

Bond Falls resides just outside the Ottawa National Forest near Watersmeet in Ontonagon County, Michigan. It is administered by the Upper Peninsula Power Company. For information or inquiries about the area as well as current conditions, visit the UPPCO website or the US Forest Service website.

Bond Falls was very close to the tiny hamlet of Paulding, Michigan (roughly 9 miles south of Bruce Crossing and 10 miles north of Watersmeet).

In fact, the parking lot for the falls was a mere 3 miles east of Paulding along Bond Falls Road.

The parking area was on the left side of the road at the bottom of a short descent.

There was a self-help pay-and-display to pay for the “Passport”, which required $10 in day-use fees that was only good for the day.

I wasn’t sure if they had one of those one-hour passes like the Wisconsin State Parks had.

Just to establish a frame of reference, Paulding, Michigan was about 95 miles (nearly 2 hours drive) west of Marquette, Michigan (probably the largest city of note in the UP).

From Marquette, we would have to drive west on Michigan State Highway 41 for about 54 miles.

Then, we’d turn left onto Hwy 141 and drive for about 4 miles, then keep right to go on Route 28 for about 34 miles to Bruce Crossing.

Next, we’d head south on Michigan State Hwy 45 for about 9 miles to Paulding.

Note that Watersmeet was another 10 miles further to the south of Paulding on the same state highway.

Going in the other direction, Paulding was about 62 miles (a little over an hour) east of Ironwood, Michigan.

From there, we would have to drive east on Hwy 2 for about 51 miles to Watersmeet, then head north on state highway 45 for 10 miles to Paulding.

From Ironwood, we also could’ve driven about 10 miles on Hwy 2, then keep left to take the Hwy 28 for 40 miles to Bruce Crossing.

Then take the Hwy 45 south for 9 miles to Paulding. 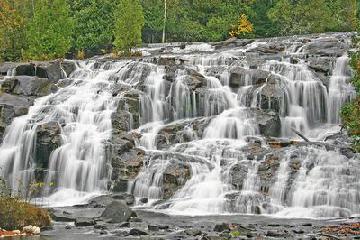 Bond Falls, Western Upper Peninsula, Michigan April 15, 2015 12:40 am by Daniel - Bond Falls is considered the best waterfall in the Upper Peninsula. That's a pretty big claim, but when you have a cascade over 100 feet wide, you pretty much dwarf the competition. On the middle branch of the Ontonagon River, a few miles east of Paulding in Haight Township in southern Ontonagon County, Michigan. ...Read More