Bridal Veil Falls was certainly one of those roadside waterfalls we couldn’t have missed even if we tried!

For starters, it was a roadside waterfall right next to a busy highway.

However, it also had that rare distinction of having a short spur loop road that allowed us to drive behind it!

I don’t think we had ever driven behind a waterfall that neither wasn’t modified by man nor wasn’t passing through a manmade tunnel.

So I guess given this rather rare quirk about it, perhaps it shouldn’t have been surprising that it was not only memorable but also immensely popular!

During the nearly half-hour that we spent at this 45ft waterfall, I couldn’t count how many people drove their cars behind it.

There were even a couple of folks who did the loop twice, and another guy with a guilty look making eye contact with me with his hands up in the air as he passed by.

Maybe he was feeling a bit embarrassed that his wife made him do it!

There was a large pullout just beyond the small loop going behind the falls.

That allowed us to park our car and do that loop by foot.

The only real hazard for us was making sure not to become roadkill as well as not fill our lungs with too much soot from the particulates of the exhaust from vehicles slowly passing by.

We also happened to show up in an early Autumn afternoon when there was a rainbow in its mist as well as lots of Autumn colors.

Indeed, it was definitely a fun waterfall and certainly worth a visit if you’re in the area.

Bridal Veil Falls resides in the Nantahala National Forest near Highlands in Macon County, North Carolina. It is administered by the USDA Forest Service. For information or inquiries about the area as well as current conditions, visit their website or Facebook page.

Highlands was the nearest town to Bridal Veil Falls so we’ll describe the driving directions from there.

So from the Hwy 64/106 junction (where Main St turns into Franklin Rd) in the town of Highlands, we continued northwest (towards the town of Franklin) on Hwy 64 for about 2.4 miles.

The loop and pullout was on our right.


L-shaped sweep from behind the falls 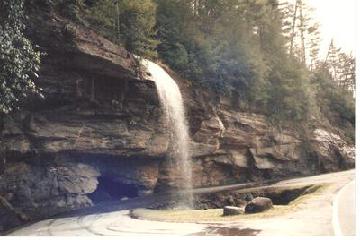 Bridal Veil Falls Highlands, NC USA July 25, 2012 3:23 pm by Betty Davis - This is a waterfall you can drive under. A few years ago it froze over and the ice dropped onto the road, closing if for weeks. It's a beautiful fall. ...Read More