Burgess Falls is actually a series of waterfalls on the Falling Water River.

That said, the name generally refers to only the largest of the waterfalls, which has an unusual shape (almost reminiscent of a smaller version of Union Falls in Yellowstone National Park).

Julie and I saw four noticeable waterfalls in a short stretch of the river, which were immediately downstream from a dam that formed Lake Burgess.

Burgess Falls was said to be named after a Revolutionary War vet named Tom Burgess whose family ran a mill powered by the Falling Water River.

The Riverside Trail to Burgess Falls

There were two trails that led from the parking lot to the top of the last of the Burgess Falls.

The trail that hugged the river most of the way was about 3/4-mile each way (or 1.5 miles round trip), and we’ll begin the trail description using this approach.

According to a map sign at the trailhead, the very first waterfall was very close by, and it was called the Cascades.

The Cascades consisted of very tiny drops (possibly 10ft in height) spanning the width of the Falling Water River in an uneven fashion.

Barely 100ft downhill along the riverside trail, we got to the second waterfall, which was called First Falls as it was the first major waterfall we saw (if we didn’t count the Cascades).

The First Falls was said to drop some 30ft.

There were some concrete and metallic remnants behind the lookout for this waterfall, and I believe they were once part of a flume that was the penstock of an old hydroelectric scheme.

Roughly 0.3 miles further down the riverside trail from the First Falls, we reached a lookout platform for the third waterfall, which was called Middle Falls.

The viewing platform gave us top down views of the front of this 60ft cascade, which was very photogenic given its width and lacy appearance.

I don’t think there was a safe way to get down into the gorge and closer to the Middle Falls, but we felt the view from the platform was adequate anyways.

Finally, at about 0.75 miles from the trailhead, we reached the lookout platform for the last waterfall, which was called Big Falls.

This 136ft waterfall was unusual in that it seemed to drop over a protruding wall giving the appearance that it had two waterfalls facing away from each other.

Although I’ve seen photos where the Falling River River had enough flow to cover the entire wall of Burgess Falls, there was much less water during our visit so it appeared to us as two separate waterfalls side by side.

Most of the water tended to fall over the south facing part of the drop, which also was the side most visible to us without having to wade in the river to improve the view.

While I’m sure the viewing experience from the overlook would be adequate for most people, we also took the steep trail that descended towards the base of the Big Falls.

A signpost stated that this trail was strenuous, but I’d argue that it only got dicey once we got towards the bottom of the descent past the covered stairs.

The reason was that mist from the Burgess Falls tended to moisten and muddy both the rocks and the trail itself.

Thus, the footing down there was precariously slippery and prone to injury with a misstep and tumble.

We definitely had to exercise some caution, and we even had to employ using our hands as well as the sit-and-scoot maneuver whenever we weren’t too sure about keeping our balance.

Finally, it was also possible to reach the top of the Big Falls just before the covered stairs.

However, there were no guardrails there so we also had to be very careful not to stray too close to the edge of the cliff.

The Shortcut Trail to Burgess Falls

The alternate trail was on what seemed to be an old road (now a maintenance road).

This path cut straight to the top of the last waterfall (i.e. Big Falls) bypassing all the other waterfalls en route.

I’d imagine this alternate trail would be a little quicker than the riverside trail only because there would be fewer stops.

It’s possible to make a loop out of this hike using both of these trails in either direction though we happened to do each trail in an out-and-back manner over our pair of visits.

Timing and Hours at Burgess Falls

During our visit in late October 2012, Burgess Falls State Park opened at 8am and closed half-hour before sunset (which was around 5:30pm).

I’d say the best time to take photos would be right around opening time since the waterfall would be completely in shadow.

We showed up at around 8:40am and the sun’s rays already started to pierce over the the uppermost tip of the Big Falls thereby blowing out long exposure photos.

Had we shown up any later, we would’ve been looking against the sun from the waterfall’s base.

Conversely, we also showed up in the late afternoon (around 4:15pm), but we were definitely in a rush to do our exploring before the ranger would close the gate.

I guess it was a good thing because it motivated us to make a second trip the following morning (which we just described above).

In the afternoon, the sun hit only one face of the falls while left the other face in shadow.

Perhaps the sun’s backlighting might have been more favorable in the early afternoon when both sides of the falls would be lit up while also producing faint rainbows.

Burgess Falls resides in the Burgess Falls State Park near Cookeville in Putnam County, Tennessee. It is administered by the Tennessee Department of Environment and Conservation. For information or inquiries about the area as well as current conditions, visit their website.

We stayed in Cookeville so we’ll describe the directions from there to Burgess Falls.

On the western end of Cookeville along the I-40, take the exit for Hwy 135 (there are signs indicating for you to take this exit).

Just as you cross the bridge over the Falling Water River, the turnoff for Burgess Falls State Park is on the right.

Follow this spur road another 0.3 miles to the large parking lot at its end.

To give you some geographical context, Cookeville was 81 miles (90 minutes drive) east of Nashville, 102 miles (over 90 minutes drive) west of Knoxville, and 99 miles (2 hours drive) north of Chattanooga.

Bottom up sweep of the First Falls


Fixated on the Middle Falls


Left to right sweep across the Middle Falls 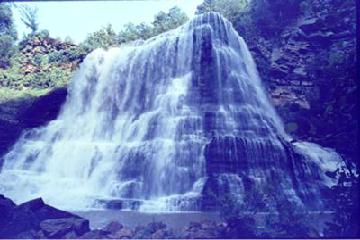 Burgess Falls August 7, 2011 2:21 pm by Cindy - This photo is from a negative that's at least 45 years old. I ran across it in my parents' house. I think it may have been taken in Mexico in 1963, but I'm not sure, and I've looked at images of waterfalls there and not seen anything like this. I'd appreciate any information about it.… ...Read More