Great Falls of the Potomac River

About Great Falls of the Potomac River

The Great Falls of the Potomac River was the waterfalling excuse for Julie, Tahia, and I to explore the vicinity of our Nation’s Capital – Washington DC.

We made it a point to drive the nearly 15 miles or so from DC to the Great Falls Park on the Virginia side.

After all, the prospect of even seeing a natural waterfall so close to iconic places like the National Mall was simply an activity that we couldn’t miss as far as we were concerned.

By the way, the National Mall harbored important landmarks like the Lincoln Memorial, the Jefferson Memorial, the White House, the Washington Monument, and Capitol Hill, among others.

The Potomac River itself (on which the waterfall sat upon) was also rich in history, which we’ll get to later.

So it really felt like a visit to the Great Falls of the Potomac River was both a pleasant respite into natural surroudings away from the urban developments as well as a step back in time.

The Appearance of the Great Falls of the Potomac

The Great Falls was really a section of the Potomac River where it narrowed and dropped a cumulative height of some 76ft over a series of rocky cascades.

There were a couple of rocky islands that seemed to split part of the falls providing that somewhat disjointed look to it.

Apparently, daredevil kayakers would run these cascades, and we even saw one such kayaker climb the rocks on one of the rock islands before putting in just above the lowermost tiers of the waterfall.

While I’m not too familiar with the extreme sport, I’m guessing that whatever he ran appeared to be class V conditions.

Clearly, he had to know what he was doing to avoid a possible drowning, which park signs here had warned that at least seven people each year have done (thanks to the river’s strong currents).

What was really refreshing about our visit to the Great Falls was that it was in a very naturesque setting as trees and wetlands were all around us.

And even though we were literally minutes away from Washington DC, we really felt as if we found our escape from the urban jungle when we came here.

In any case, there was a bit of history tied to the Great Falls of the Potomac River.

Apparently, it was a natural barrier preventing further upstream travel at a time when boats provided the most convenient way of hauling supplies for long distances.

George Washington was a major advocate of building a canal to facilitate the hauling of supplies between the Great Lakes to the Eastern Seaboard, and he founded the Patowmack Company towards this effort.

Over time, the canal that played a very prominent role in American History was the Chesapeake and Ohio Canal (or C&O Canal), which currently stands as part of the National Parks System.

During the American Civil War, the C&O Canal became a very strategic asset as both Union and Confederate forces fought to control or undermine this important means of movement of supplies and troops.

After the Civil War, the canal remained in use to haul coal, wood, limestone, flour, etc.

However, it was ultimately undone by Mother Nature when a flood in 1924 and then in 1936 pretty much rendered the canal unable to fulfill its intended commercial purpose.

Experiencing the Great Falls of the Potomac River

We pretty much only toured the Virginia side of the waterfall at the Great Falls Park.

From the parking lot (see directions below), we made a short walk to the three main overlooks.

We started with the furthest overlook (known as Overlook 3), which featured a full and contextual view of the waterfall itself from a wheelchair-accessible lookout.

Right in front of that lookout was a pole containing signposts of the year where the high water marks of the Potomac were at during its recorded history.

It was amazing to see that even as late as 1996, this overlook was under water!

As we continued to backtrack on the main walking route, we then detoured into Overlook 2.

This brought us a bit closer to the Great Falls, where we could almost literally look across the river towards the lone lookout of the falls on the Maryland side.

We were still able to get contextual views of the entire waterfall from here, while also getting a sense of the sheer power of the Potomac River passing by us.

Like with Overlook 3, Overlook 2 was said to be wheelchair accessible.

Finally, we backtracked to Overlook 1, which brought us the closest to the wide and brown cascading water.

From here, we could almost feel the power of the Potomac.

It was a bit tricky to get up the smooth and slick rocks towards some of the higher lookout spots, but perhaps our most intimate experience of the Great Falls was had from such spots.

We really had to keep an eye out on our daughter here because she literally took these rocks as a climbing challenge.

Thus, I could understand why the park signs said this overlook was not wheelchair accessible.

Overall, it took us about an hour to fully take in all three overlooks.

There was an opportunity to continue along the river trail towards Seneca Falls to the north and Stubblefield Falls to the south.

However, with our limited time (we had to catch a flight out on the day of our visit) and the stifling heat and humidity of June, we decided to pass on those additional waterfalls.

The same could be said about spending time to check out this waterfall from the Maryland side at the Chesapeake and Ohio National Historical Park.

Since we drove to the Great Falls Park from the Ballston suburb of Washington DC (a short distance west of both the Pentagon and the Reagan Airport), we’ll describe our route from there.

After finding our way through the surface streets towards the entrance of the Interstate 66 in Arlington, we drove west towards the Hwy 267 for about 4 miles.

We then took the 267 towards Dulles Airport for about another 4 miles before exiting at Spring Hill Road (we had to pay a $1 toll for this stretch of highway).

Turning right onto Spring Hill Road, we then followed this undulating road for about 1.3 miles before turning left onto Old Dominion Drive.

We followed Old Dominion Drive for another 3.8 miles all the way to the car park near the Visitor Center for Great Falls Park.

Overall, this 16-mile drive took us around 30 minutes.

The Great Falls Park and the C&O (Chesapeake and Ohio) Canal National Historical Monument were both administered by the National Park Service.

So we had to pay a $5 vehicle entry fee.

It was said that we could have used our Great Falls Park admission to get into the C&O side of the Great Falls without paying more, but since we were short on time, we didn’t get to check out the Maryland side of the falls.

Similarly, we also could have taken the George Washington Memorial Parkway from any of the main bridges across the Potomac River in the vicinity of the National Mall.

Then, we’d follow the parkway north along the west bank of the Potomac River until exiting at Hwy 123 (Dolly Madison Blvd; about 5 miles between the Theodore Roosevelt Memorial Bridge and the Dolly Madison exit).


Panning around the waterfall from overlook 2


Panning around the waterfall from overlook 1 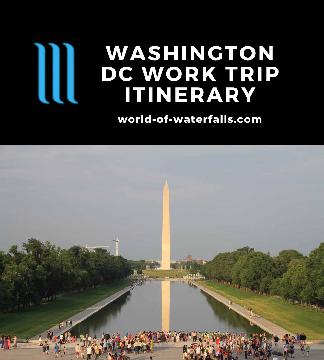 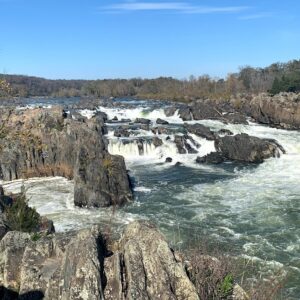 Great Falls (Virginia/Maryland) October 11, 2021 4:58 am by Rick A. Ludwig (aka Trip T. Akers) - This really beautiful set of falls on the Potomac River separate the states of Virginia and Maryland. There is a fee to visit the park, but it's worth it if you love great waterfalls. ...Read More