While the 115ft high cascade made for a worthwhile sight, I thought the Enfield Glen (the gorge we walked through to get to the falls) was just as impressive.

It almost felt as if we were hiking through scenery that canyoneers earn when they descend into the slot canyons in the deserts of the American Southwest except we were in New York on an easy walk!

As a matter of fact, we happened to be here when people from a well-dressed wedding party also managed to reach the falls (just to give you an idea of how easy the walk was).

The gorge in which this falls was a part of looked to be composed of shale instead of sandstone.

Hiking in the Enfield Glen

I’m sure we could have done the longer 3-hour (5.3-mile) loop hike along both the Gorge and Rim Trails that would’ve helped us appreciate the geology better as well as give us different views of Lucifer Falls.

In any case, even though it was cooler in the glen, perhaps the heat and humidity of the Summer enticed us to go the lazy route instead of the longer loop hike.

Thus, we wound up on the shorter walk which started and ended from a car park at the head of the gorge down to Lucifer Falls itself.

I didn’t keep track, but I’m pretty certain the walk we did was about a mile or less round trip.

The walk started from the upper parking area near an Old Mill, which was a very popular car park, it seemed.

The walk from here immediately descended into the scenic narrow gorge and past some picturesque smaller cascades on the way to Lucifer Falls.

We also noticed interesting football-looking pods by the falls.

It was almost as if someone with tremendous accuracy managed to chuck footballs on the other side of the falls.

I’m still not sure what exactly those things were or how they got there.

Lucifer Falls resides in the Robert H. Treman State Park near Ithaca in Tompkins County, New York. It is administered by the New York State Office of Parks, Recreation, and Historic Preservation. For information or inquiries about the area as well as current conditions, visit their website.

From Ithaca, we headed south on Hwy 13 for a few miles and then turned right onto the Hwy 327 turnoff. We then followed Hwy 327 for a little over 2.5 miles (it becomes Enfield Falls Rd) where we turned left onto a park road that dead-ends near an Old Mill (and also near some buildings where a wedding was held when we were there).

One of the cascades seen upstream from the main Lucifer Falls 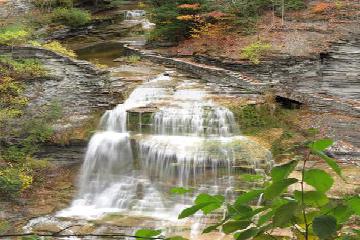 Lucifer Falls from south overlook Fall 2012 July 2, 2016 8:32 pm by Les Dudek - Lucifer is possibly my favorite falls. Hiked around falls with my sister (ages 57 and 75). Low-traffic weekday. Beautiful fall day. Down north trail from mill, across bridge and up cliff-face trail (a must - don't miss catwalk with dedication plaque on way up). A lot of climbing both down and up. Fully-constructed trails, but… ...Read More