About Middle Falls of the Genesee River (Letchworth)

It could very well be our favorite waterfall in the state of New York not named Niagara Falls.

From looking at the photo above, it shouldn’t be surprising why we thought so highly of it.

The falls has been said to be 107ft in height, but it also seemed to be a bit wider than it was tall, making Julie partial to this one.

We were able to view this falls from a variety of vantage points all accessible on very easy paved walking paths that were a short distance from the car park (see directions below).

There was even a top down vantage point from a lookout right in front of the historical-looking Glen Iris Inn.

The Grand Canyon of the East

The Middle Falls comprised the lower drop of the nearly back-to-back series of waterfalls with the Upper Falls.

The depth of the canyon here kind of gave it the rugged appearance as the Genesee River carved into this part of the “Grand Canyon of the East” that was also known as Portage Canyon.

We were able to appreciate the overall canyon as well as both waterfalls from Inspiration Point, which was a well-established lookout at a separate car park from the Upper and Middle Falls.

Experiencing the Middle Falls of the Genesee River

The extensive network of walkways around the falls allowed us to photograph and enjoy it from plenty of different vantage points.

We started off by visiting its brink, then we walked further downstream along the gorge allowing us to get even more views of the falls from various angles.

There was also the closest frontal view of the falls where we could best appreciate the breadth of the wall of water while also getting a little bit of its spray.

Finally, there was a path crossing the driveways then going up stairs towards the Glen Iris Inn, which appeared to be bustling with activity during our latest visit in October 2013.

More about the Middle Falls of the Genesee River

Because this falls also had some character to its wide drop, it was the right kind of waterfall to bring a tripod along and try to take those long exposure photographs (many of which were featured on this page).

Of course, if the tripod proved to be too inconvenient, the concrete barricates also could have served as makeshift tripods to steady the camera and take those long exposed silky shots.

Indeed, options were plenty and the hour or so we spent at this falls (as well as the Upper Falls just a few minutes walk further upstream) reminded us why this place was worth the repeat visit.

Finally, the falls was said to be known as “Ska-ga-dee” by the local Native Americans (particularly the Seneca tribe).

I also read in the literature that they actually light up these falls at night from May to October though we never stuck around late enough in the day to see this for ourselves.

The Middle Falls of the Genesee River resides in Letchworth State Park near Mt Morris in Livingston County and Wyoming County, New York. It is administered by the New York State Office of Parks, Recreation, and Historic Preservation. For information or inquiries about the area as well as current conditions, visit their website.

See directions for Upper Falls of the Genesee River (Letchworth) for the way we went to at least get to Portageville near the Southern entrance of Letchworth State Park as well as to the town of Castile by the western entrance to the park using Ithaca and Buffalo, respectively, as starting points.

To give you a sense of geographical context, Ithaca was 155 miles (over 2.5 hours drove southeast of Buffalo, 166 miles (about 3 hours drive) southwest of Albany, and 223 miles (over 4 hours drive) northwest of New York City.

Upstream to downstream sweep from the brink of the falls 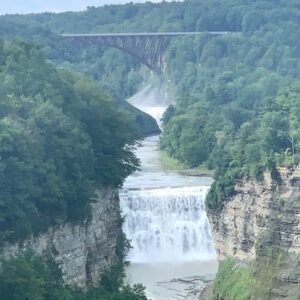 Middle Falls of the Genessee River (New York) October 11, 2021 5:11 am by Rick A. Ludwig (aka Trip T. Akers) - Located in Letchworth State Park, the Upper and Middle Falls are worth visiting. Such a beautiful river flowing through an enormous gorge. ...Read More