Passaic Falls (also known as the Paterson Great Falls) was perhaps the most unusually-situated waterfall we could recall.

After all, it was smack in the middle of a lot of urban developments that were close enough to New York City that we even entertained coming here by taking public transportation from the subways in New York City to the PATH in New Jersey.

Nevertheless, after visiting this most unlikely of places to find an impressive 77ft high 260ft wide waterfall, we learned that this place was also at the forefront of the American Industrial Revolution.

Indeed, it was the Passaic Falls that was the venue for harnessing its hydro power to drive machinery.

Such contraptions would eventually transform the United States from a colonial frontier into what it would ultimately become today.

It was one of those rare instances where an urban waterfall like this expanded our minds, taught us a little more about American history, and demonstrated the resiliency of Nature despite man’s efforts to exploit it.

The History of Passaic Falls

The history here was evident as we spotted a statue of Alexander Hamilton (who was Secretary of the Treasury at the time) as well as historical buildings around the falls.

We also noticed other historical relics further downstream that we didn’t have time to visit.

Regarding the significance of Alexander Hamilton, apparently he had a strong desire to develop Paterson into an industrial city in an attempt to fulfill a vision of making America economically independent from the British.

Eventually, this desire and political backing resulted in Paterson becoming an early adopter of industrial might.

The city was even called “Silk City” given its role in powering the textile industry at the time.

During our visit, we saw restored and aged remnants of the industry that was once here (even without seeing the rest of the relics further downstream).

These relics provided the reason for the restoration and preservation of the Great Falls of Paterson.

Thus, it was recently turned into the Paterson Great Falls National Historical Park in 2011, meaning that it was now part of the US National Parks System.

Passaic Falls and the US Federal Government Shutdown in 2013

Strangely enough, our visit to the Passaic Falls in mid-October 2013 happened during the US Federal Government shutdown (a result of political grandstanding between teh two major parties).

By the way, that shutdown did adversely affect our intentions to go to Acadia National Park in Maine a couple of weeks prior to our arrival here.

Thus, we were allowed to enjoy the waterfall that was the very last one of our epic trip through the cradle of both the US and Canada.

Our visit to the Passaic Falls merely revolved around the main overlook near the parking lot (see directions below).

From this vantage point, we were able to see the falls nestled in a short gorge beneath what appeared to be some kind of pipe going across it.

Neighboring the gorge and the falls was the SUM (Society for Useful Manufactures, which was Alexander Hamilton’s investment group) Hydroelectric Plant.

The main overlook area was also where we noticed the Alexander Hamilton statue.

Overall, we probably spent about 35 minutes from this main overlook area since nothing was open and the neighborhood around here was a little rough around the edges.

Experiencing Passaic Falls from above

When we had our fill of the frontal but distant view of the Passaic Falls from the main overlook, we then walked along McBride Avenue towards a smaller parking lot near its junction with Wayne Avenue.

From there, we went through an open gate that led us over some bridges past some diversion flow to the hydro plant.

Meanwhile this path afforded us a view of some wider but smaller series of waterfalls further upstream from the Great Falls itself.

That section of the river seemed like a typical river surrounded by urban developments (something similar to what we saw at the High Falls in Rochester).

Thus, the water did have a little bit of that urban runoff smell.

We eventually went onto the bridge next to the pipes spanning the gorge carved out by the Passaic River and the Great Falls.

The view from the bridge was what you see in the photograph at the top of this page, and we thought it was probably the prettiest view of the falls that we were able to get.

On the other side of the bridge, there was a little park-like area where some locals were chilling out.

It was interesting to watch them talk amongst themselves, trying their luck at fishing the Passaic River, or even checking out the furthest overlook nearest to the head of the gorge by the falls.

We only spent about 15 minutes or so at this bridge section for similar reasons to why we limited our time at the main overlook down below.

Admittedly, the area around the Passaic Falls or the Paterson Great Falls National Historical Park was a bit rough around the edges during our visit in October 2013.

We were content to check out the best views of the falls from the bridge, but we didn’t go all the way across it as the thought of our safety (especially with Tahia coming with us) definitely crossed our minds.

We weren’t sure about what some of the group of loiterers were doing in the area though the smell of marijuana smoke was strong (possibly suggesting some benign recreational drug use, but you never know).

In a way, I guess these observations were kind of the good with the bad that we had to accept as part of an attractive place encroached by urban blight.

I’m sure lessons could be learned by city planners and developers regarding the impact that such developments have on natural attractions (i.e. resources) despite their lure of economic gains.

Passaic Falls resides in the Paterson Great Falls National Historical Park in Paterson in Passaic County, New Jersey. It is administered by the National Park Service. For information or inquiries about the area as well as current conditions, visit their website.

We pretty much followed some online directions to Passaic Falls courtesy of the National Park Service.

So we’ll describe exactly the route we took to elaborate on it a bit.

We’re well aware that there are many ways to reach this place from all directions, but since it’s pretty easy to get lost in the city, we figured the following step-by-step instructions might help you (as it did for us).

Since we visited Passaic Falls as part of the very long drive from Watkins Glen to White Plains North Metro Station, we detoured to Passaic Falls as we came into Paterson, New Jersey from the west.

So as we were driving east on the I-80 into the city of Paterson, we then took the ramp for exit 57B for Hwy 19 North.

Once we got onto the Hwy 19N, the freeway quickly ended at Oliver St.

Just when the freeway ended, we had to keep left because one of the next lights was for Cianci Street, where we had to turn left.

This was a very busy intersection so we had to be patient (pretty much waiting until the light turned yellow) before being able to go across the traffic to the left.

Then, we had to go one light while on Cianci St to Market St, where we then turned left.

We followed Market St all the way to the three-way intersection with Spruce St, and we turned right onto Spruce St.

At the next light, we turned right to go onto McBride Ave, and the parking area for the Great Falls of Paterson (or Passaic Falls) was on our left.

Note there was also a parking lot on the right side of the street, but that was for the Great Falls Historical District Cultural Center and not for the falls itself.

We were advised to take the NJ Transit Train from Penn Station to Secaucus Junction, then take the train from this station to Paterson.

At that point, we would have to walk about a mile or so to the Great Falls of Paterson Historical site.

We eventually decided against this idea since we still had our rental car and we opted to visit this place on our way to returning it in White Plains, New York.

That ended up freeing up the entire day to tour just New York City the next day instead of devoting a whole half-day or longer to get back here by public transportation and back.

By the way, to give you some context, Paterson, New Jersey was 229 miles (4 hours drive) southeast of Watkins Glen, 38 miles (45-60 minutes drive) southwest of White Plains, and 22 miles northwest of New York City (which was why we had entertained using the public transport given the traffic in the city).

360 degree sweep of the main viewing area startin with a zoom in of the falls, then swinging around the picnic area before zooming in on the Alexander Hamilton statue, before finally ending back at the falls

The falls are a lot more powerful after the snow melt (Passaic Falls) March 17, 2015 12:31 am by Al Farparan Jr - I visited these falls yesterday. It was a nice sight to see. With the snow melt the falls were a lot more powerful. It was one single curtain of water all the way across. I never knew such a huge waterfall would be right here in Jersey. Unfortunately like you mentioned the area isn't so… ...Read More 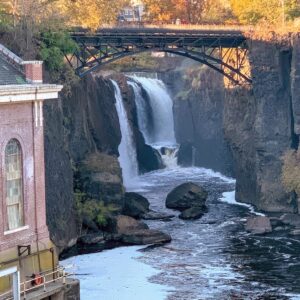 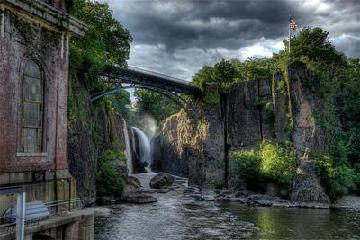 Great Falls in Paterson, NJ January 11, 2012 3:53 pm by Stephen - The power of this water fall was used in the 1790s to make Paterson the first industrialized city in the US and it helped America gain economic independence from Britain. It looks cool too! ...Read More