Raven Cliff Falls (not to be confused with the one in Northern Georgia) is said to be South Carolina’s tallest waterfall with a drop of around 400ft though some have disputed this claim saying it’s more on the order of 320ft or so.

Regardless of trivial numerical figures, what stood out about this waterfall was the explosion of Autumn colors surrounding the shadowy basin where Matthews Creek made its dramatic drop.

As you can see from the photo above, the view of the falls from the official trail and lookout was a very distant one.

Otherwise, it’d be hard to appreciate the full size of Raven Cliff Falls since there didn’t appear to be an obvious way to get a closer and more intimate look of it.

Getting to the waterfall overlook required a 4.4-mile out-and-back hike.

While moderately long, most of this hike contained gentle elevation changes and it didn’t undulate as drastically as say the Lower Whitewater Falls trail.

That other trail took me a bit longer to complete even though its length was said to be shorter in distance than that of the Raven Cliff Falls Trail.

From the somewhat hidden parking area (especially if you’re heading south from North Carolina; see directions below), I had to cross Hwy 276 before descending on the official trail past some sign boards and a trailhead register.

The trail was mostly straightforward to follow as trail junctions were well signposted.

Besides, the trail was quite popular so it was pretty easy to tell which way to go when confronted with a trail junction or a fork given the likely presence of other people.

Throughout the hike, I had opportunities to gaze up and admire the orange and red colors of the leaves, which were on the verge of falling with any onset of breezes.

There were also limited opportunities to peer through the trees and glimpse the basin beneath Caesar’s Head towards the Table Rock vicinity.

Eventually, the trail for the Raven Cliff Falls terminated at what appeared to be a newly-built viewing platform.

I had read other trip reports that said the old viewing deck (which was said to be much closer and better than the current one) was destroyed by a fallen tree and hadn’t been rebuilt since.

Whatever the case may be, I was pretty content with the view that I was afforded on this trail, and I didn’t attempt any further exploration.

Raven Cliff Falls resides in the Caesar’s Head State Park near Cleveland in Greenville County, South Carolina. It is administered by South Carolina State Parks. For information or inquiries about the area as well as current conditions, visit their website.

Parking for Raven Cliff Falls is about 1.6 miles south of the North Carolina-South Carolina border along hwy 276.

It’s also a little over a mile northwest of the Caesars Head Visitor Center along the same highway.

The trail for the falls DOES NOT start at the Caesars Head Visitor Center (which we had mistakenly thought before the ranger there set us straight).

It’s important to note that if you’re heading south on Hwy 276, chances will be that you’re going to miss the parking lot for Raven Cliff Falls (unless you knew where to look in the first place).

I have no idea why they did this, but the signpost for the trailhead’s parking is only visible if you’re heading north on Hwy 276.

So if you see the Caesars Head Visitor Center, you went too far and will have to use it as a turnaround point (we know from experience).

Once you finally find the trailhead parking, there’s a self-help fee kiosk with envelopes.

As mentioned earlier, you have to walk across the highway to get to the trail for the Raven Cliff Falls.

Make sure you look both ways and be quick about crossing the highway because it’s not far from a blind turn.

It took us about a half-hour to cover this distance.

Note that the gates for the visitor center doesn’t open until 9am so it might be a little trickier to make your turnaround if you don’t have the benefit of the parking lot to do it. 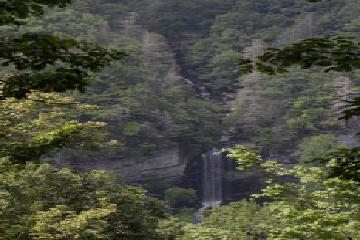 Raven Cliff Falls, Caesar Head South Carolina July 10, 2011 12:32 pm by BJ Winchester - I heard this was a strenuous hike. It was! You literally are going through a partial rain forest. It is misty raining half way through the trail. It is a 2.2 mile hike one way. Beautiful and many birds. You hear blue jays, pilleated woodpeckers, quail, chickadees, and some sort of mountain bird which I… ...Read More