Ruby Falls was perhaps the most anticipated waterfall of our 2012 Appalachians trip.

As with most things in life, when you anticipate something, it generally means you’re imposing some lofty expectations.

And with lofty expectations, you usually set yourself up for disappointment.

However, after having seen this waterfall, Julie and I have to agree that it definitely met those lofty expectations.

So that’s definitely saying something about Ruby Falls!

A big reason why we anticipated visiting this waterfall was because it was 145ft tall and completely within a cave system (i.e. it was underground).

Although this wasn’t the first subterranean waterfall we visited (we saw the Crown Cave Waterfall in Guilin, China in 2008), this definitely promised to be much more scenic.

In order to see this waterfall, we paid the admission price for a guided tour (click here for the latest on hours and prices), then followed the guide for about 100 minutes.

It began with an elevator ride taking us some 1120ft below the surface of Lookout Mountain, then traversed a maze of corridors with formations that the guide gladly pointed out along the way.

The falls was towards the end of the tour.

Perhaps a key factor in making our visit so pleasurable was that we were in a very small tour group (8 people), which allowed for what our guide called the “VIP” tour.

Small tour groups are only possible when there are few tourists around.

We showed up in time for a 9am tour, but the tour that came immediately after us had to have had at least 30+ people, and the groups after that had even more people!

Indeed, I’ve read TripAdvisor reviews lamenting about being rushed at the Ruby Falls, and that was a key factor in why we rearranged our itinerary to ensure we showed up as early as possible.

Anyways, once we were finally at Ruby Falls, I believe we were given a set amount of time where the guide turned on the lights (and the accompanying music) before the lights eventually turned off.

Once the lights were off again, it was nearly pitch black and you’d no longer be able to photograph or capture the Ruby Falls experience visually.

Fortunately with a small group, we didn’t feel rushed.

In fact, there was plenty of time to try to compose Ruby Falls as best we could though with hindsight being 20/20, there’s always things I wished we could’ve done or tried out.

It looked like they used to let past visitors walk around the base of the falls, but we weren’t able to do that on our visit.

I’m not sure if it was for safety reasons or if it was easier to control the tour groups without the complication of worrying about people in that narrow circular loop.

History of Ruby Falls and the Cave System

As for the history of Ruby Falls and the cave, it was said to be accidentally discovered by Leo Lambert.

He looked for an alternate entrance to the Lookout Mountain Cave to reopen it as a tourist attraction.

The original natural entrance of Lookout Mountain Cave was sealed off due to construction of a railway.

The plan for the alternate entrance involved drilling a shaft down from the top.

And it turned out that Leo stumbled upon a different “upper” cave system that was totally different than the Lookout Mountain Cave system he looked for.

On a second spelunking visit to this waterfall, he brought his wife.

She managed to do the 6-hour claustrophobic scramble, and for her trouble, Leo named the falls after his wife, Ruby.

The rest, as they say, was history.

One thing that visiting Ruby Falls made me aware of was the meaning of visiting a natural waterfall.

The reason why this waterfall brought about that question was because there was quite a bit of work (most of it done with explosives) to widen the crawl spaces into walkable passageways suitable for almost anyone including elders and kids.

We’d like to think visiting waterfalls in their natural, untouched state is really the way you’re supposed to do it.

However, had this access work not been done, special spelunking gear and a claustrophic 6-hour scramble in the dark would be required to even get to the Ruby Falls.

Indeed, a subterranean waterfall like this required some bit of human intervention to make it as publicly accessible as it is today.

There will always be that subjective question of how much intervention is tolerable before the natural attraction stops being natural.

For example, you could make the argument that the experience at Dan-yr-Ogof Showcaves Waterfalls in South Wales, UK took liberties with the man-made changes to another level.

That said, you could also argue the flip side where hardly anyone would be able to see this waterfall had it not been for the infrastructure put in place (i.e. the elevator, the wide passages, the railings and stairs, and even the artificial lighting!).

Ultimately, since this cave is privately owned, that judgment call was made by the owners, who decided to commercialize and monetize it.

So regardless of wilderness ethics versus accessibility tradeoffs, Julie and I were certainly glad we got to see Ruby Falls.

However, we could also see why some people may be put off by the commercialism and the crowds.

Ruby Falls resides in Lookout Mountain near Chattanooga, Tennessee. It is administered by Ruby Falls. For information or inquiries about the area as well as current conditions, visit their website.

Ruby Falls is on the Tennessee side of Lookout Mountain near the city of Chattanooga (almost next to the Northern Georgia border and just a few miles east of the Northern Alabama border).

There are many ways of getting to Ruby Falls, so we’ll just tell you how we did it.

From the I-24 approaching Chattanooga from the west, we followed the freeway signs for Ruby Falls and exited a ramp that took us onto W 25th St.

Turning right onto W 25th St, we then turned left onto Broad St.

Climbing for about 0.7 miles on Scenic Highway, the parking lot for the Ruby Falls complex was on the right.

To give you an idea of drive times, it took us about 90 minutes to go from McMinnville (where we had stayed the previous night) to Chattanooga (though we had to switch from Central Time to Eastern Time so we actually lost another hour).

By the way, if you’re anywhere near the Chattanooga area, you’ll undoubtedly see plenty of “See Ruby Falls” billboards.

I’m willing to be that there are so many signs for the cave and falls that you probably don’t even need to follow our directions.

How Ruby Falls looks without the lights on


Slow top down sweep of the falls


Slow bottom up sweep of the falls 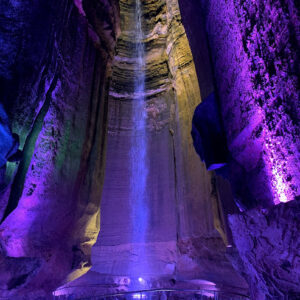 Ruby Falls (Tennessee) October 11, 2021 4:45 am by Rick A. Ludwig (aka Trip T. Akers) - A waterfall inside a cave in Chattanooga, Tennessee. There is a fee to take a tour of this waterfall/cave. An elevator takes you like 10 stories down below and a lighted tour takes you to the underground waterfall. Worth the money if you are in the area. ...Read More