Soco Falls was another waterfall we visited during our brief time in the vicinity of the Great Smoky Mountains near Cherokee.

This waterfall was actually a pair of converging small waterfalls (I’m guessing its about 40ft or so).

I’ve seen claims that it’s 120ft but I doubt you get to see all of it if that’s indeed the case.

It appeared that there was a newly built viewing platform that gave us a direct view of the taller (and prettier) part of Soco Falls.

This platform was only a few minutes walk on a narrow, descending trail that hugged the embankment supporting the Hwy 19.

However, we wanted to get more direct (hence better) views of BOTH waterfalls in one go, so we looked around for a path to do that.

We eventually noticed a scrambling path that went around the viewing platform with some stringy guide lines that provided rather minimal support for the steep descent below the viewing area.

This descent was definitely not for everyone as the steep slope was muddy, slippery, and appeared to be unstable.

A spill here could be really bad (i.e. broken bones or worse) so we’ll leave it up to you to gauge whether you find it’s worth getting the view you see at the top of this page.

Otherwise, when in doubt, leave it out!

Similarly, going up the steep slope required using all four limbs so that should give you an idea of how precarious it can be.

Soco Falls resides outside the Great Smoky Mountains National Park near Maggie Valley, North Carolina. It is administered by the Cherokee Indian Reservation. For information or inquiries about the area as well as current conditions, you can try visiting the NPS website even though they’re technically not in charge of Soco Falls.

Soco Falls is near Mingo Falls and Maggie Valley, and since we started our drive from Mingo Falls, we’ll do the driving route from there.

The Mingo Falls page has directions from West Asheville to Cherokee, but we’ll reproduce it here since it’s fairly straightforward to find.

Then take the US19 (Great Smoky Mountains Expressway) for about 22.5 miles (you’ll be passing through the town of Maggie Valley).

The pullout (room for maybe a half-dozen cars or so) is at a sharp turn on the left side of the road about 1.2 miles west of the turnoff for the Blue Ridge Parkway.

Budget about an hour to go from West Asheville to the falls.

Coming in the other direction from the town of Cherokee at the US19/441 intersection, drive east for just under 11 miles (maybe 20 minutes or so).

The pullout for Soco Falls is on the right.


Fixated on the double waterfall from its base 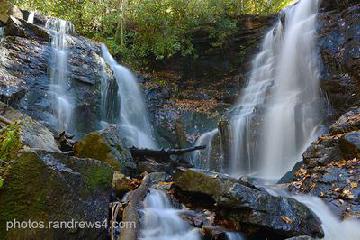 Soco Falls in western North Carolina October 31, 2014 12:09 am by Ron Andrews - I visited Asheville, NC last week. I only had one day for waterfall hunting. I enjoyed Soco Falls. I've never seen a double falls like this where two branches of a creek come together at the bottom of the gorge. There is a viewing platform near the highway. The view from the bottom of the… ...Read More