Turner Falls was perhaps Oklahoma’s most scenic waterfall as well as its largest.

It was where Honey Creek fell some 77ft over a series of travertine cliffs giving the falls a bit of a lacy appearance.

Its cumulative height was said to be the state’s second tallest waterfall though its reported height figure was behind that of Natural Falls (if it happens to be flowing).

Further upstream of the main waterfall, there was an attractive series of cascades called the Bridal Veil Falls.

There was also a natural arch in the cliffs above the main waterfall’s plunge.

In addition to its scenic qualities, Julie and I felt this waterfall stood out to us because its existence defied our expectation that the area was mostly plains and farmland.

Indeed, we didn’t realize that the presence of the Arbuckle Mountains of south central Oklahoma kind of created enough of that geological diversity needed to have a natural attraction like this.

Julie and I were first made aware of the Turner Falls when my mother made a visit here during a business trip several years ago.

Ever since then, we were looking for excuses to go to this part of the country as an opportunity to visit the falls.

We managed to experience Turner Falls in a couple of different ways – one from a distant overlook (outside of Turner Falls Park) and another from up close on a hike.

The Turner Falls Park itself was pretty built-up with lots of facilities including restaurants, shops, a water park, and cabins for overnighting.

So making a visit to the main waterfall would typically be very short and easy as it would involve walking on a flat paved road alongside the creek.

However, our visit happened to be just after the passing of some pretty severe thunderstorms, which swelled up Honey Creek and caused the closure of that easiest route to the base of the main falls.

So we ended up driving up a hill to a different parking lot at a picnic area close to the Turner Cabins as well as the large parking area near the Bridal Veil Falls walk.

We can describe the trail from this perspective since that was how we ended up doing it, but I’m aware that this would be a bit more extended than a more typical, shorter visit.

Hiking to the front of Turner Falls

From that picnic area where we ended up parking at (see directions below), we then walked down a rocky route to some castle.

It wasn’t clear to us what the significance of this castle was, but the path went right through the structure.

Then, the trail descended several stairs before reaching the flat road alongside Honey Creek at the bottom.

This flat road was where the parking lot was supposed to be.

Anyways, once at the bottom, we followed the road upstream, where a trail branched off before a concrete ford.

Taking that trail, we then followed alongside some cliffs before ultimately reaching a bridge right across from the plunge pool at Turner Falls.

From the bridge and the unbridged shores on either side of the falls, we were able to view Turner Falls from almost all possible angles.

On the far side of the bridge, there was a building (selling refreshments, perhaps), which I’d imagine would be busy in the Summer months.

Given the fairly turbulent and unstable weather during our visit, the colors of the algae growing on the travertine as well as the colors within the cliffs themselves didn’t really come out.

The color of the water also didn’t come out as Honey Creek was mostly a greenish-brown with storm runoff and some small amounts of litter.

I’m sure under sunnier conditions (like when my Mom made her visit a few years back), Turner Falls would be much more photogenic.

Anyways, we wound up spending less than an hour away from the car, but that included walking the trail through the castle as well as spending lots of time at the Turner Falls itself.

Optional Hike to the Natural Arch and Bridal Veil Falls

Back at the picnic area at the top of the hill where we started the hike, there was also a larger parking lot almost adjacent to it.

From that lot, there was a well-signed trail that descended from the end of the parking area to a couple of views of Bridal Veil Falls as well as closer access to a natural arch.

I thought the natural arch was down below the lookout at the end of the trail besides Honey Creek.

However, it turned out that the arch was actually to the left of the trail near the top of the cliff (it was also visible from the bridge before Turner Falls down below).

This side excursion only took a few minutes, but it was very muddy and slippery thanks to the storms that had passed through earlier.

Finally, there was a different way to experience Turner Falls, but it wasn’t from within the Turner Falls Park.

Indeed, there was a distant overlook allowing us to get a birds eye view of most of the park.

This overlook sat near a curio shop that we passed by on the way to the Turner Falls park (which we’ll describe how to get there in the directions).

There were a couple of lookout platforms (with coin-op telescopes) from which we were able to see the waterfall, the castle, and some wind farms in the distance.

We made our visit to Turner Falls from Ardmore so we’ll describe our driving route from there.

It was also possible to drive south from Paul’s Valley as well.

Either way, the park was not far off from the I-35 and the route was well signposted from off the interstate.

So we’ll just focus on the approach from Ardmore since that was how we did it.

From Ardmore, we headed north on the I-35 for nearly 14 miles.

We then took the exit 47 towards the Hwy 77 (which a brown sign for the Turner Falls Park directed us to do).

Next, we turned left to go onto Hwy 77, and we followed this road for about 3 miles to the entrance for the park after a sharp left turn.

Note that at 2.2 miles from the I-35 off-ramp we took, there was a curio shop with a parking lot, and this was where the distant overlook of Turner Falls was at.

We then proceeded to drive into the Turner Falls Park, where there were kiosks to collect the entrance fee.

We wound up paying $4 per adult plus tax ($8.76 total since Tahia was free) during our March 2016 visit, which turned out to be their Winter rates.

Apparently in the Summer time, the rates jack up to $12 per adult probably because swimming would be allowed and the weather would likely cooperate a bit more than it did for us.

Once we got past the gate, we drove past the park headquarters (where there was also some restaurant across the road) before going beneath an archway.

On the other side of it, there was the first of two concrete fords.

The first one was a bit scary due to fairly high water going over the ford.

However, we were still able to get through in our passenger car (though I’d imagine they’d close the park or make you walk across the neighboring bridge if this was impassable).

Shortly thereafter, there was another concrete ford that seemed less severe than the first.

After that second ford, there was a nearby parking lot to our right, which I’d imagine would be where we could’ve parked and walked along the main walkway besides Honey Creek up to Turner Falls.

At this picnic area, there were parking spaces on a rough unpaved area (i.e. rocky and potentially requiring high clearance vehicles).

There was also another large parking lot closer to the Turner Cabins as well as the trailhead for the Bridal Veil Falls and Natural Arch Rock.

The walk to Turner Falls via the castle began from that picnic area with the rough parking spots.

Overall, this drive took us just under 30 minutes.

For some context, Dallas, Texas was about 2 hours further south of the Turner Falls. Meanwhile, Oklahoma City was about a 90-minute drive to the north. 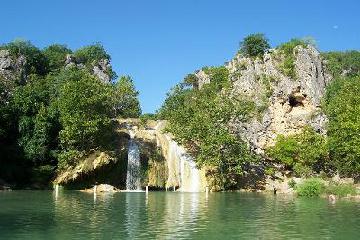 Turner Falls – Davis, Oklahoma August 7, 2010 4:32 pm by Jenny - Here are the pictures I took of Turner Falls. This is the highest spot in Oklahoma. It is very beautiful but there were lots of visitors. The weather was hot and had been over 100-103 degree. Directions: From Dallas continue North on I-35 and take Exit #47 for Turner Falls Park. From Oklahoma City continue… ...Read More