The Upper Tahquamenon Falls (it rhymes with “phenomenon”) was easily the most impressive waterfall of the Upper Peninsula of Michigan.

It certainly deserves to be mentioned among the best of the Great Lakes Waterfalls, which includes big and scenic waterfalls like Kakabeka Falls, Gooseberry Falls, and even Niagara Falls!

I would even argue that it might be better than the similar Cumberland Falls in Kentucky, which was said to be roughly 68ft tall and 125ft wide.

For sure it was the best waterfall we encountered for the entirety of our Great Lakes trip in 2015 that encompassed the Upper Peninsula of Michigan as well as much of the neighboring states and provinces of the Great Lakes basin.

As you can see in the photo above, the Upper Tahquamenon Falls had a very wide block shape (said to be 50ft tall and more than 200ft wide).

Perhaps the only downside to our visit here was that the peak of the Fall colors didn’t quite take effect yet (we might have come too early by a couple of weeks).

Even without the kaleidoscopic effects of the Fall colors, the water did exhibit a brownish color which was said to be a result of the natural tannin staining the water from the peatlands further upstream.

Besides, the naturesque settings and wildness of the Tahquamenon River felt just right for a special place like this.

By the way, sometimes this waterfall is called just Tahquamenon Falls even though there exists a Lower Tahquamenon Falls, but we’ll keep the “Upper” in the name for the purposes of this write-up to avoid confusion.

Experiencing the Upper Tahquamenon Falls – The Upper Trail to the Brink

Our visit to the Upper Tahquamenon Falls began from a very large parking lot (see directions below), which even had a brewery and pub here attesting to the waterfall’s popularity.

Also nearby were some interpretive signs at the so-called Fact Shack, which included an encased stuff cougar as well as a handwritten board saying the river’s flow was 2278 gallons per second.

After going past the Fact Shack and a restroom facility, we then walked roughly 1000 ft or so to a signposted junction.

Along the way, there were more interpretive signs mostly about the flora of the area.

Then, we had a choice of going right towards the top of the Upper Tahquamenon Falls or go left to descend into the gorge for a more frontal look at the falls.

I’ll discuss the latter option in the next section.

So going right at this junction, after about 400ft or so, we started to get a top down look at the impressive Upper Falls through the openings in the foliage at a pair of overlooks.

Because our visit took place very late in the afternoon, we were also looking against the setting sun.

So that suggested to us that morning would probably have the best light as long as there wasn’t too much fog obscuring the view.

In any case, the views from these upper viewpoints were satisfying as they revealed the entire breadth of the falls as well as its forested context deep within a gorge.

An interpretive sign here said that the highest flow ever recorded on the Tahquamenon River was a whopping 50,000 gallons per second.

This maximum was over 200 times the current flow rate (2278 gal/s) as reported back at the Fact Shack by the parking lot!

Beyond the upper lookouts, we then descended a series of stairs containing 94 steps leading to the brink of the Upper Tahquamenon Falls.

The lookout area at the bottom was long enough to even give us a partial frontal view of the overall width of the waterfall as well as an impressive view of its profile and the Tahquamenon River meandering further downstream within its gorge.

Fortunately for us (and other visitors who have brought their family), the fenced railings gave us some piece of mind as our daughter was able to safety view the falls without the risk of falling into the fast-flowing river.

Speaking of the river, the Upper Tahquamenon Falls wasn’t totally free of man-induced interventions as apparently there were efforts in 1883 to remove sandstone (including a small neighboring waterfall).

Experiencing the Upper Tahquamenon Falls – The Lower Trail to the River

Back at the paved junction, we then took the other path going in the downstream direction.

Interpretive signs along this part of the trail told of the history of logging along the Tahquamenon River where white and red pine trees were pretty much cleared and even caused huge log jams.

There was an overlook of the Upper Tahquamenon Falls, where we managed to get perhaps our best frontal photos of the falls (see photo at the top of this page).

The trail would continue for another 0.2 miles before reaching a fork where the left path went on the primitive North Country Trail to the Lower Tahquamenon Falls (4 miles away).

Meanwhile the path on the right descended 116 steps into the base of the gorge.

At the bottom of the steps, I found myself on a long boardwalk path that ultimately got me to a lookout at its end yielding the most direct view of the Upper Tahquamenon Falls that I could get.

There was also another lookout a little further downstream, which was more partial and really seemed to be more about appreciating the gorge as well as providing river access.

After having my fill of the gorge, I returned to the car to rejoin Julie and Tahia who opted not to go into the gorge.

Overall, we spent a little over an hour away from the car.

However, as you can see, we easily could have spent even more time here given the many different trails and lookouts that were available here.

The Upper Tahquamenon Falls resides in the Tahquamenon Falls State Park near Paradise in Luce County, Michigan. It is administered by the Michigan Department of Natural Resources. For information or inquiries about the area as well as current conditions, visit their website.

From Paradise, Michigan, we drove about 14 miles west on the M-123 to the well-signed turnoff on the left for “Upper Falls”.

This was about 3.5 miles west of the turnoff for the “Lower Falls”.

Overall, this drive took us about 20 minutes.

At the parking lot, there was an entrance kiosk that wasn’t manned so we had to pay and display with the self-help envelope for $10 non-resident fee for the Michigan Recreation Passport for the day of our visit (in late September 2015).

Coming from Munising, Michigan, we took the M-28 (it continued on Cedar St in Munising) for about 57 miles south then east to its junction with the M-123 near Newberry, Michigan.

Turning left onto the M-123, we then drove for the next 27 miles to the signed “Upper Falls” turnoff on our right.

Overall, this drive took us around 90 minutes. 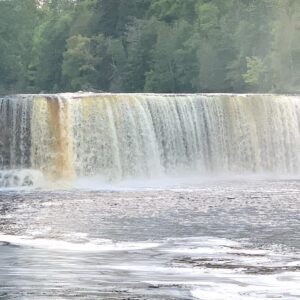 Upper Tahquamenon Falls (Michigan) October 11, 2021 5:19 am by Rick A. Ludwig (aka Trip T. Akers) - Located in upper peninsula Michigan, this is one huge waterfall. While you are there, don't forget the lower falls too. Highly suggest Spray Falls if you are in that area. ...Read More