Upper Whitewater Falls was definitely a waterfall that left a lasting impression on us.

In addition to its impressive stature, it was the forceful volume and the presence of Autumn colors that really made this multi-tiered waterfall stand out to us.

Aiding in the smorgasbord of colors against the cloudless blue skies was also the fact that we just so happened to show up in the late afternoon when the sun was right behind us.

Therefore, we got the benefit of warm afternoon backlighting yielding a rainbow within the mist wafting up from the waterfall’s rushing spray.

Upper Whitewater Falls is said to have a cumulative height of 411ft thereby causing some to proclaim it to be the highest waterfall east of the Mississippi.

Now we’ve seen many claims of other waterfalls given the same title (so surely not all of them can be right), but there’s no denying that this waterfall has way more than just its height going for it.

With its flow on the aptly named Whitewater River, I have yet to see a photo of this waterfall in a dry or trickling state, which tells me that it definitely flows year round.

From a very large parking lot (perhaps a good indicator of how popular this waterfall is; see directions below), we loaded and dropped the $2 fee envelope (I recalled this was a per vehicle fee) into a self-help kiosk.

Then, we walked a short, wheelchair-accessible, paved walking path to an upper overlook area.

The view from this upper overlook revealed most of Upper Whitewater Falls, but its bottom sections were obscured by some tall trees and foreground foliage.

So naturally we continued down some 154 or so stair steps towards a lower overlook for a closer and more direct view of the Upper Whitewater Falls (despite a misleading sign saying “Foothills Trail 0.1” implying it only goes there?!?).

Even though the platform could accommodate quite a few people (maybe at least a dozen or more), there was only a small area on that platform with choice viewing where trees didn’t get in the way.

I’d imagine there was only room for two or three people for that choice spot in the middle of the platform.

Depending on how busy it gets, I’m sure you might have to wait your turn for those choice views (as we did) so it pays to not be in a hurry.

The trail continued beyond the viewing platform towards the Foothills Trail, but it appeared to get rougher as the steps gave way to conventional trail consisting of dirt, rocks, and the occasional tree roots.

A sign also indicated that there would be no more views of this waterfall, which was a big reason why this lower overlook was as far as we needed to go.

All things considered, we spent about an hour here, which included the short walking distance (I believe it’s 0.5 miles round trip) plus all the photo taking and waiting our turn for the choice spots on the lower platform.

That one is far less popular and offers a much quieter experience though it probably doesn’t have quite the wow factor as this one.

Upper Whitewater Falls resides in the Nantahala National Forest near Brevard in Jackson County, North Carolina. It is administered by the USDA Forest Service. For information or inquiries about the area as well as current conditions, visit their website or Facebook page.

When we visited Upper Whitewater Falls, we were staying in Brevard, North Carolina so we’ll describe the directions from there.

So from Brevard, we drove about 17 miles southwest on NC64 (Rosman Hwy) then turned left onto Hwy 281 going south.

At roughly 8.5 miles south of the junction, there was a signed turnoff on the left for the Whitewater Recreation Area.

Taking this turnoff, the large parking lot was a short distance into this spur road.

If we happened to miss this turnoff while zooming by on the Hwy 281, we would have known that we had gone too far if we would reach the North Carolina-South Carolina border, which was just a half-mile beyond the turnoff.


Top down sweep of the falls from the lower lookout


Fixated on the falls from the lower platform 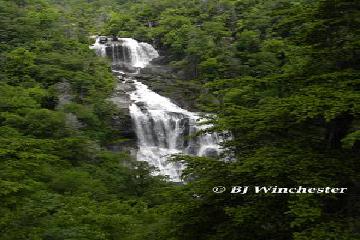 Whitewater Please remember to pay for parking! November 28, 2013 12:19 pm by BJ Winchester - Please pull up and get your parking envelope put the money in and park, then deposit the envelope on the way up to the falls. This allows us access to this magnificent falls without a full time Forest Ranger. Bring a lunch, it has picnic tables and I often see hummingbirds, chipmunks, Tennessee warblers and… ...Read More